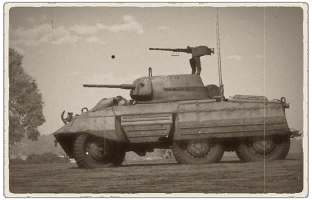 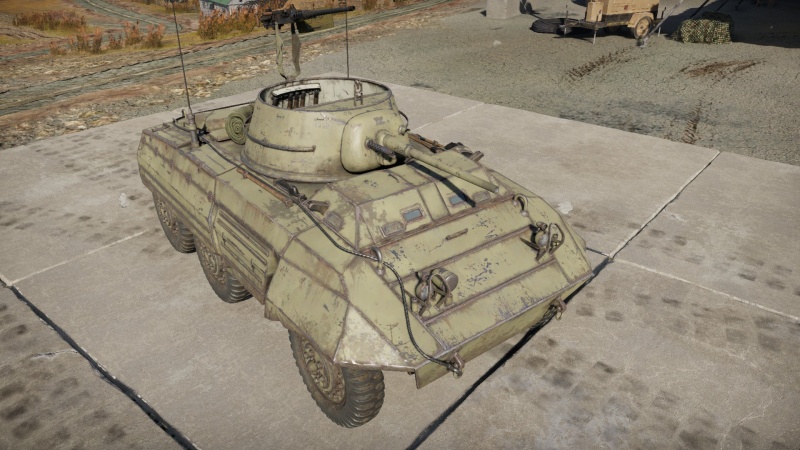 The ␗Light Armored Car M8 is a rank I Chinese light tank with a battle rating of 1.0 (AB/RB/SB). It was introduced in Update 1.91 "Night Vision". It is identical to the American M8 Greyhound.

This vehicle's intended design leaves us with only 12.7 mm of armour at a 59° angle slope at the front hull, Side hull is only protected with 9.5 mm. And the strongest part being the gun mantlet with 25 mm added to 19.1 mm of turret armour. As a result this vehicle is only protected against rifle-calibre MG fire, with the sides easily penetrated by heavy MG fire. Although this may prove an advantage when fighting against shells with delayed fuse. The crew is very tight, so one AP shell at the center could knock out everyone inside, but notice that there is a huge gap between the driving compartment and the fighting compartment, meaning it will absorb plenty of shells and saving the player from being destroyed quickly. There are some rounds stored at the turret, and at the vehicle's floor, bringing less rounds eliminates the rounds stored in the turret. Also keep in mind that it is an open top vehicle, making it vulnerable to artillery and aerial attacks.

The M8 LAC is armed with an 37 mm M6 cannon as its main armament. This is a small calibre fast-firing gun with a maximum penetration of 84 mm at 100 m (M51B1 shell), being able to penetrate almost all the opponents it will ever face. While it lacks the post-penetration damage to one-shot most enemy, it can quickly finish them off with its fast reload. The penetration and trajectory drops a lot beyond 500 m. Note that the gun has a vertical stabiliser, giving the player a huge advantage in some cases, but keep in mind that the stabiliser only works when the tank is slower than 10 km/h. 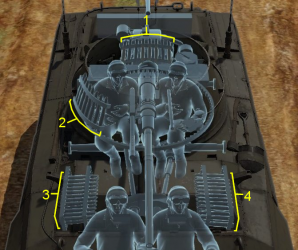 The two machine guns on the M8 LAC are the good old .50 cal M2HB and the 7.62 mm M1919A4. The roof-mounted .50 cal can traverse 360 degrees and has great depression & elevation, posting a big threat to any plane that is flying too close to the M8. It has an unbelievable penetration of 31 mm at 10 m, meaning it can easily penetrate plenty of lightly armoured vehicles and even the side of some medium tanks. The 7.62 mm MG, on the other hand, can only efficiently damage exposed crews due to its low penetration.

Another playstyle is the hit-and-run tactic, thanks to its great mobility and small profile. If careful enough, it can travel between points like a ghost without being noticed and flank the enemies. The stabilizer will help a lot as it gives the player the ability to fire first. If the first shell missed or didn't penetrate, it can even finish off the enemy with the .50 cal HMG alone.

The driver is at the foremost part of the hull. Behind him, there is absolutely nothing, so you must avoid shooting there. Behind the empty space, the turret houses 2-3 crew members. Shoot there to disable its gun. And don't forget, at the very rear of the LVT, the two exposed machine gunners can be taken out with the .50 cal. Memorize those three main locations of the crew, and you can effectively destroy any LVT out there with your rapid reload. Also, if the angle isn't too large, the .50 can penetrate the LVT's weak armour.

During World War 2, more than 1,000 M8 armoured cars were lend-leased to the Allies, including Free France and Brazil. After WW2, the US Foreign Military Assistance Program donated surplus cars to the United States Constabulary in various Western European and Asian nations. French Forces noted usage of this car, and during the Korean and Vietnam War, both Viet Cong and Chinese got their hands on it as well, but the Korean Army was the primary user, who then donated them to the Vietnamese. Belgium also used these cars as part of NATO, and in UN forces sent to peacekeep in the Congo. M8s are still in service in Columbia, Guatemala, Peru, and Paraguay.

The M8 greyhounds were supplied to National China (which was only Taiwan at this stage) by the US around 1950, roughly around the same time they were supplied with other tanks such as the M24 and M41. These tanks were exported to Taiwan in much greater quantities than the M8 LAC, therefore it saw little use in combat.