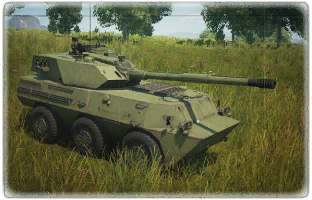 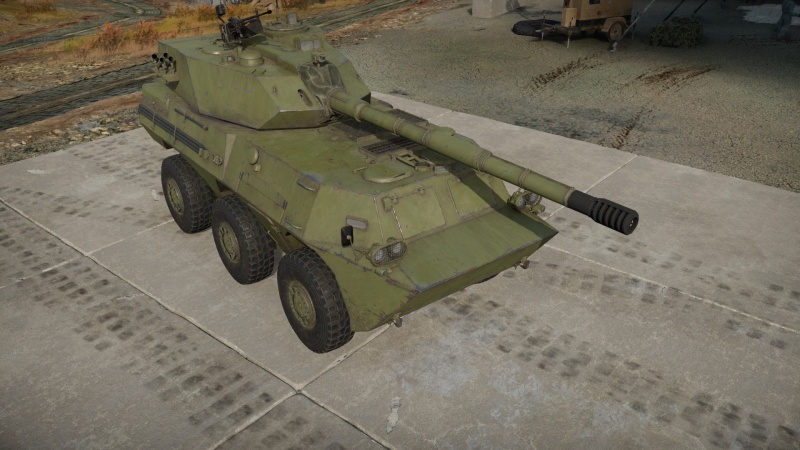 The WMA301 is a premium rank VI Chinese light tank with a battle rating of 8.3 (AB/RB/SB). It was introduced in Update "Red Skies".

Based on the same WZ551 chassis as the ZSL-92 APC and the PTL02 assault gun, the WZ301 is an export-only vehicle of Mainland China made by the NORINCO Factory 256 at Chongqing. The most noticeable differences from the PTL02 are the newly-designed welded turret that somewhat resembles the ZTZ96A in terms of the arrowhead shape, and the replacement of the original 100 mm smoothbore gun with a standard 105 mm rifled gun. This assault gun saw service in different African countries and in Myanmar, serving as a quick-response assault gun for the buyers and a fast-moving addition to their inventory.

Anyone familiar with the PTL02 can adjust to the WMA301 easily. It is a very similar vehicle for the most part, the main difference lying in its armament. The 105 mm rifled gun has a similar ammunition selection to the T-69 II G with a new addition being the GP105 gun-launched ATGM. The WMA301's APFSDS is less potent that the PTL02's top round, but it has access to a proximity fused HE round for fending off helicopters and a powerful tandem-warhead ATGM for defeating heavy targets, making it a very versatile vehicle. With good positioning and situational awareness, the WMA301 can contribute in almost any situation.

Both the WMA301 and its cousin the PTL02 share the very same WZ551 chassis, the WMA301 only having very slight modifications to the fighting compartment. So the WMA301 shares the same flaw of being very lightly-armoured hull: avoid anything with a HMG or any autocannon vehicles (including aircraft) at all costs, because it is very likely you will not have a second chance to return fire and knock the enemy out. On close inspection, it can be seen that WMA301's hull armour uses high-hardness armour in some areas instead of standard RHA, but considering that the plates are still identically thin to the PTL02's, the improvement in protection is negligible.

Also, its overall height is still high, so it will easily be spotted by enemies albeit with the combination of thin armour and large, empty volume will occasionally frustrate enemies firing subcalibre rounds. Penetration is essentially guaranteed, but minimal spalling is created and a hastily aimed shot may not catch many crew members or important modules in the line of fire. On the other hand, HE shells with a high explosive mass will often transmit shockwaves into the vehicle's interior and knock out the crew with overpressure damage. Other chemical rounds like HEAT and HESH might inflict overpressure damage but with a much lower probability. Bombs, rockets, and artillery shells are similarly dangerous.

The WMA301's turret is slightly more resilient than the PTL02's from the front. The turret face is made of high-hardness RHA and the arrowhead shape leads to greater sloping. This does not make a significant difference in practice; at best, it might shrug off some light autocannon fire at a distance.

Since the WMA301 is essentially a PTL02 with a different turret, the whole power train and the suspension system are totally the same as the latter, powered by the same Deutz DBF8L413F and ZF 5S-111GPA transmission, so they share the same top speed at 85 km/h and the subpar reverse at -7 km/h. Surprisingly, it has the same weight as the PTL02 despite the new features.

Like its domestic cousin, to make the most out of the good top speed, it will need to navigate on hard terrain (roads, urban surfaces) for best results. If players must be used on hilly and soft terrain maps, try your best not to get stuck since the lack of mobility will absolutely be the death sentence of this vehicle.

Since the WMA301 is an export vehicle and the compatibility to mainstream ammunitions is essential, it chose a 105 mm gun as its main armament; based on the ZPL94 gun found on T-69 II G but with lower recoil. It can fires both NATO and NORINCO's 105 mm ammunitions ranging from HEATFS to APFSDS, as well as HE-VT rounds.

During the late 1990s, Mainland China has acquired 100 mm gun-launched ATGM technologies from Russia, so the WMA301 also comes with a powerful GP105 tandem ATGM which owners of BMP-3 may find familiar. The statistics are identical to the 9M117M1 Bastion: good travel speed, high TNT equivalent mass, and a tandem warhead for bypassing ERA. Thankfully, the WMA301 does not suffer from the BMP-3's massive reload penalty for ATGMs. The GP105's whopping 750 mm of penetration it can take down practically anything it will ever meet at its BR. This is less than the ZBD86's HJ-73E ATGM, but still more than generous - even high-tier Soviet behemoths like the T-64B or T-72B, featuring ERA and strong composite armour, can be defeated by GP105. As a beam-riding missile, the GP105 is immune to IRCM and can be guided on the move if necessary.

The Type 83 APFSDS round is the same as found on the ZTZ59D1 and shares all traits of it, which is still sufficient for its BR but it might struggle when it faces Russian MBTs with higher protection at longer ranges. For example, a fully spaded T-72A with the add-on armour can be difficult to penetrate outside of the standard Soviet weak spots of the driver's port and lower glacis, whereas the PTL02's DYW PT86-100 round can penetrate the T-72's hull quite easily. The APFSDS is still the best all-purpose round since it has a high muzzle velocity and is a kinetic projectile that will not be disrupted by bushes, fences, and contemporary ERA.

The Type 83 HEAT-FS round is nothing special, only having very slight improvements over the Type 1973 HEAT-FS used by the PTL02. Against most targets it is simply less useful than the APFSDS. HESH rounds have low penetration and poor ballistics, successful impacts creating wide but shallow sprays of spalling. The HEAT-FS and HESH rounds are generally obsolete, as their only advantages over the APFSDS are their ability to cause overpressure damage through their explosive content, but the aforementioned GP105 can perform the same role as well; in fact, GP105 has a higher TNT equivalent than both the HEAT-FS and HESH. Using HESH rounds as an last-ditch option to knock out hull down vehicles by splashing turret roofs might occasionally be viable.

Last but not least is the DTB-1 HE-VT round, seen previously on the T-69 II G. Although it is useful to deal with helicopters or low-flying aircraft in very shallow dives, this should be done with caution since anything that flies is the last thing the WMA301 wants to face. For anti-helicopter duties, locate the target using the WMA301's thermal sights, lase them with the laser rangefinder, and fire the round with enough lead to catch them comfortably within the proximity fuse radius. Keep in mind that DTB-1 has a rather low muzzle velocity and it is difficult to hit helicopters that are moving unpredictably and/or staying at long range. Actual aircraft are difficult to hit since the WMA301 doesn't have as much gun elevation as a proper SPAA. Serious anti-air duties are best left to the WZ305 or PGZ09.

The turret-mounted 12.7 mm QJC88A HMG has already become the standardized HMG for most PLAGF vehicles after the 1990s and this exported assault gun was no exception. The main usage of the HMG is to deal with lightly protected vehicles and low-flying aircraft including helicopters. It can also effectively damage gun barrels, tracks, optics, MG, and ERA to assist teammates in destroying enemies, though this may require a lot of fire. Players who dealt with the paltry 50-round belt capacity of the 12.7 mm DShK machine guns of previous PLA vehicles will be happy to know that the QJC88A has a much more generous 150-round belt capacity.

The 7.62 mm MG, on the other hand, is only useful in clearing obstacles such as fences, marking out enemy positions on the minimap, or knocking out exposed crew on certain vehicles (eg. M113 TOW). It lacks the penetration to pierce through even lightly armoured vehicles.

Like its domestic cousin, the WMA301's main advantages lie in its mobility and gun sight.

With its 85 km/h speed, flanking is the key to avoid any direct fire from pretty much any vehicle armed with at least a heavy machine gun. Because of the negligible protection found on this vehicle, take all precautions and avoid rushing into direct fire at all costs, you will not have the luxury of having the second chance to return fire. Being one of the slowest wheeled assault guns in the game, taking vantage points might not be possible considering the inferior top speed that only gets worse in off-road situations. The thin armour and poor reverse speed punish poor positioning, so think carefully about what spots allow the WMA301 to spot and engage enemies without being overly exposed to incoming fire. Complicated terrains are problematic for this vehicle and it tends to do better in urban combat. Any aircraft is a lethal threat, with either guns or rockets, so keep away from their sight. Use smoke grenades to mask your position if there are no buildings or other forms of large cover to hide behind. Helicopters in particular will have an easy time spotting and destroying the WMA301, so do not attract their attention and make use of the heavy machine gun, gun-launched ATGM, and as a last ditch, HE-VT if they get very close.

Whatever the situation, APFSDS and ATGM are a must for the WMA301 and they come with the tank as it is a premium vehicle. The Type 83 APFSDS can handle most targets at its BR and anything else with ERA or strong composite armour can be dealt with by the ATGM. With the same 2nd generation thermal gunner's sight and a laser rangefinder found on the PTL02, being a mid-field runner for hit-and-run attacks or staying behind and sniping careless targets are both viable roles for the WMA301.

In the early 1980s, the Factory 256 (currently known as NORINCO Chongqing Tiema Industrial Cooperation) started their version of a domestic wheeled APC program coded WZ551. The factory decided to built the APC based on Mercedes-Benz 2026 off-road truck which has just been introduced into Mainland China, the program didn't go well as they decided later on to make major changes to the propulsion system and therefore the WZ551 was delayed. This delay caused the withdrawn of funding from the 7th 5-year project and Factory 256 needed to export this APC in order to recoup their investment. However, in 1986, the prototype of the WZ551 was approved by the PLAGF and was selected as their future wheeled APC. It was approved for production in 1988 and designated as ZSL90 and later ZSL92 with improved propulsion. The WZ551A chassis was then designed to mount different weaponry ranging from riot-suppression equipment, mortar, IFV turret and anti-tank weaponry.

Two decades after its introduction, based on the PTL02 wheeled assault gun, NORINCO introduced a version of it with an improved turret and new low-recoil 105 mm gun for potential customers with needs for a fire-support vehicle with mobility. First sold to Myanmar in early 2010s, this wheeled assault gun was then exported to different Asian/African countries, serving as their quick response vehicle in heated conflict zones.