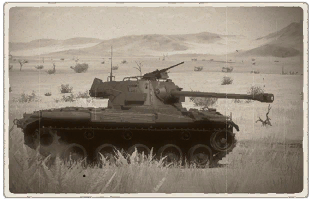 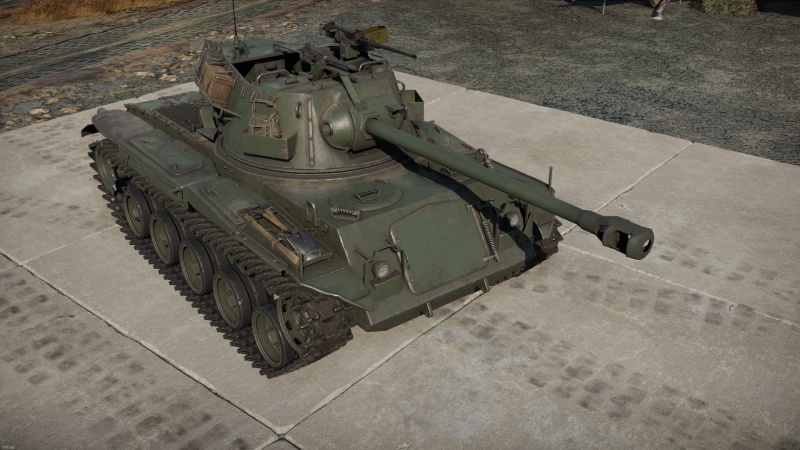 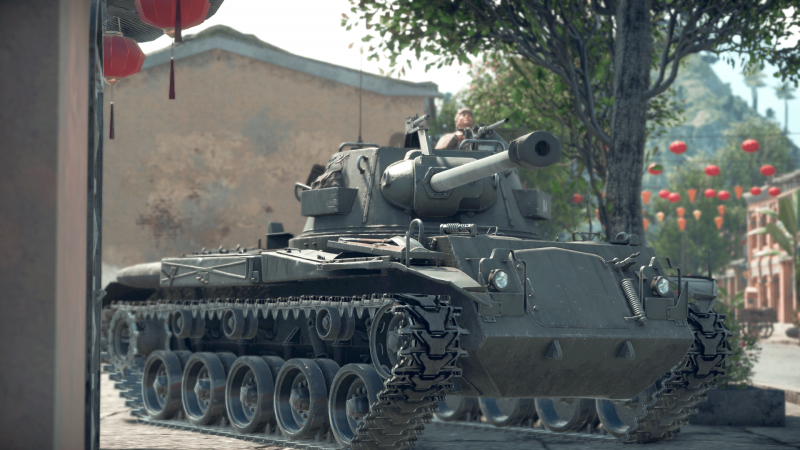 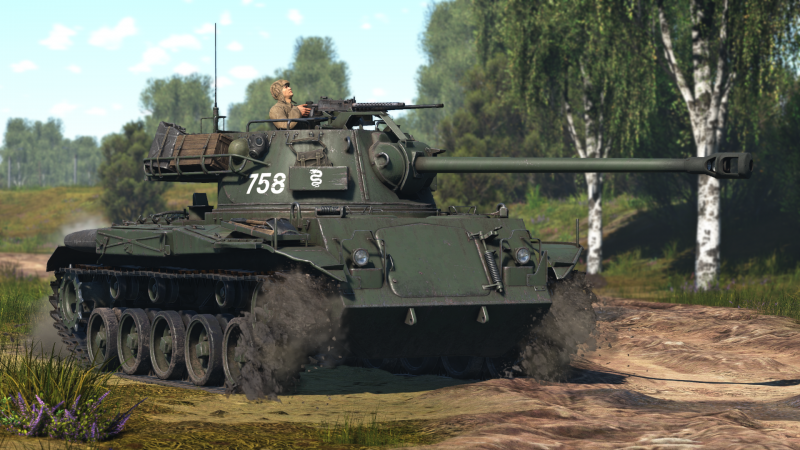 The M64 is a premium gift rank III Chinese light tank with a battle rating of 4.7 (AB/SB) and 5.7 (RB). It was introduced during Update "Winged Lions" as a reward for Battle Pass: Season VI, "Firepower".

An attempt by the ROCA to build a new tank from spare M18 turrets and M42 Duster hulls in the mid-1970s, the M64 served as a "domestic" alternative to their fleets of US tanks. Despite being heavier than the M18, the more powerful power plant allows the M64 to retain similar mobility.

The very first thing players will notice is the chassis — instead of the original Buick M18 GMC chassis, it has an M42 Duster one, a variant of M41 Walker Bulldog. While the overall design is small, this also means that any part of this tank other than the mantlet would be an easy target for vehicles with firepower heavier than .50 cal HMGs, let alone autocannon-calibre rounds with even more penetration; so the M64 should never, ever be used for direct engagements.

The larger, yet thinner, chassis might sometimes deflect larger calibre rounds, but do not rely on it, as HMG rounds will still penetrate more often than not.

The lower front plate is 25.4 mm thick, twice as thick as that of the M18. The advantage is that this thicker plate is now able to block more damage (to a limited extent) from nearby HE and bomb explosions, thus better protecting the driver and the machine gunner. It is also more effective against large-calibre MG bullets and non-HVAP autocannon shells. The downside however is that this thickness is above the fuse sensitivity of many shells (19 mm) allowing the shells to properly detonate once penetrated, as opposed to over-penetrating on the M18 (12.7 mm). This is bad news when facing tanks that primarily use high-explosive shells.

M64 was a tank assembled as a hybrid of the M18's turret on a M42 Duster chassis, which is again an M41 Walker Bulldog variant with the very same powerplant and transmission — an AOS 895-3 diesel engine and CD-500 transmission. Thanks to the introduction of the original M42 chassis in 1952, this gives the M64 an overall higher power output at 500 hp while retaining the ability to neutral steer, making it more nimble in an urban environment than the original M18 albeit with a heavier weight.

The increased weight does slow the tank down. The M64's acceleration is noticeably slower than that of the M18 especially when driving off-road. As a result, it takes much longer to reach top speed. The reverse speed is also slower, at -19 km/h. However, this is still a relatively rapid speed compared to most other vehicles at its tier.

The ammunition found on the M64 is identical to that of the American M18 GMC and M18 "Black Cat", with access to the M93 APCR round that other nation's M18s do not have. 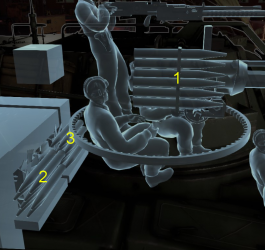 Ammo racks of the M64

While the M64 retained the M2HB from M18, ROCA welded a coaxial mount and installed an M1919A4 machine gun; both good for gunning down exposed crew and lightly armoured targets (for M2HB), and sometimes strafing aircraft.

Thanks to the fusing of M18's turret onto an M42 Duster's chassis, the M64 retains the same firepower of an M18 while having the mobility of an M41. While it has higher horsepower than an M18 and comes with neutral steering capabilities, it is also 50% heavier than M18 so it might have slightly slower speed, but in most cases this is enough for flanking enemies or rushing for vantage points. Another thing that is worth mentioning is that the change of chassis also reduced the wobbling effect on the gun when coming to a full stop, allowing for quicker aim and accurate shooting after stopping from top speed.

The change of chassis also comes at a cost, however — its protection. The M42 chassis has only 12.7 mm of armour all-around, which only stops rifle calibre bullets at most. Anything larger can tear it apart with ease; only the mantlet and turret front could stop HMG fire.

To utilize the M64 to its greatest extent, use your speed and flank enemies that are fixated on your allies. This is the most viable way to play, as its low armour means it won't survive a direct engagement. The reload rate and the performance of its M62 shells can do short work against most enemies it might face, while HVAP doesn't have the best performance, it can still be of use in case the M64 encounters tanks with flat surfaces, giving the ability to fight back in dire moments.

After retreating to the island of Taiwan after their defeat in the Chinese Civil War, the ROCA was in dire need of new tanks to supplement the heavy losses of armoured vehicles; newer vehicles such as M24 Chaffee and M18 GMC were among the new tanks purchased in the early 1950s. M42 Dusters were purchased later in 1958 as military aid from the United States.

While the M18 GMC proved its capability in WWII's European Theater, in the late 1960s, the ageing chassis and lack of spare parts for the Wright 975 C4 radial engine became a major problem for logistics; the M42 on the other hand was not efficient against supersonic jets. Thus the idea of fusing a turret from M18 with spare M42 chassis came into the mind of the Combined Service Forces (聯合勤務總司令部；aka 聯勤). In ROC Year 64 (1975), they assembled one such tank and dubbed it the Type 64 Light Tank ([國造]六四式輕戰車) which was later approved by the Commander of the ROCA for serial modifications. Some 42 M64s were assembled over the next 3 years, first seen deployed in northern Taiwan at Hsinchu and then redeployed at Penghu for defence.

As the tensions of the Taiwan Strait Crisis passed, these M64s were soon decommissioned in 1981; the only two known examples of M64 are now displayed at Armour Training Command (陸軍裝甲兵訓練指揮部) at Hukou, Hsinchu and Camp Chenggongling (成功嶺營區) at Wu'ri, Taichung City.

In the early 1950s, armed forces on Taiwan obtained a large number of armoured fighting vehicles from the U.S. and South Korea, mainly consisting of M18 Hellcat and M24 Chaffee tanks as well as a few dozen Shermans. In October 1958, they also managed to obtain a number of American M41 Walker Bulldog light tanks. However, despite more advanced vehicles becoming available, the military retained even the older vehicles in active service, leading to some vehicles even exceeding the service life of their original design. By 1969 however, the military decommissioned and scrapped several dozen M18 Hellcats. This in turn, created a gap in the fighting strength and a stopgap solution had to be formulated.

The solution came in the form of the M64 light tank, developed in 1975. It was conceived on the basis of the M42 Duster chassis which were obtained alongside the M41 Walker Bulldogs in the late 1950s. Engineers then combined the chassis with the turret of the previously decommissioned M18 Hellcats to form a new highly mobile light tank, designated the M64. Entering service in 1975, around 53 M64 light tanks were built. These vehicles didn't see any combat use and were retired from active service in 1981.