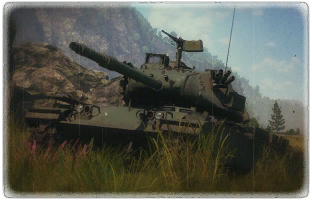 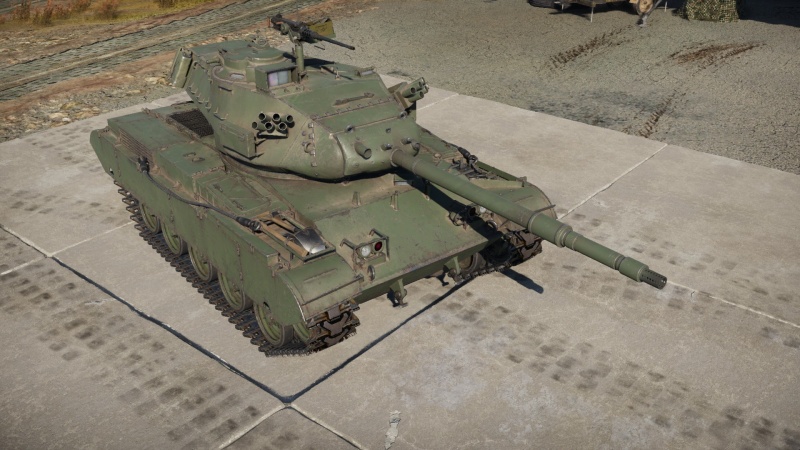 The M41D is a rank VI Chinese light tank with a battle rating of 8.0 (AB/RB/SB). It was introduced in Update "Winged Lions".

The most modern variant of the M41 in-game, this Taiwanese upgrade features APFSDS, thermals, a laser rangefinder, and a more powerful engine. The high gun depression and laser rangefinder, combined with its poor armour and lack of stabilizer, make this tank well-suited for hull-down sniping, and its good reverse speed allows it to quickly retreat if spotted. Compared to its PLA light tank counterpart, the PTL02, the M41D trades a stabilizer and some firepower for superior reverse mobility, a slightly smaller profile, and increased gun depression.

Although the M41D underwent an overhaul from the original Walker Bulldog, protection wasn't part of the upgrade. The M41D retains the very same protection like any other member of the M41 family of tanks, other than the addition of side skirts. The protection all-round is not enough to protect the tank from any shells found at the rank, autocannons are also a deadly foe for the M41D as they can penetrate it with ease. Since it is a light tank in nature, the crew is also cramped into a confined space, any penetration from shells with explosive filler or large-calibre HE shells means a very quick demise for the crew.

For upgrades in terms of mobility, most vehicles would go for higher power output from the engine or replacing the transmission system.

The upgrade for M41D did neither. ROCA decided to downgrade the original 500 hp Continental AOS 895-3 petrol engine to a Detroit Diesel 8V-71T engine for better fuel economy and torque. The statistic that matters the most is the engine output, and after downgrading the engine, the M41D can barely reach 50 km/h on road, let alone reached the claimed 72 km/h top speed. Handling is still identical, oddly, to the original M41.

The M32K1 cannon on M41D, to a certain extent, is the very first tank cannon made in Republic of China. Based on the original M32 76 mm gun found on other M41s, it can fire HEATFS, HE, APFSDS and smoke shells. It comes with a 2nd generation Texas Instruments TVD and a laser rangefinder which boosts the tank's search-and-destroy capabilities, though it has no stabilizer of any form, so firing accurately on the move is virtually impossible.

The stock shell is M496 HEATFS, which is the top shell for the German M41 and US T92; at its tier, it can handle medium tanks it might face, such as M48 Pattons or Soviet T-54/T-62 series. It might still need careful shots when facing any Cold War heavy tanks like T-10M; some other heavies can be penetrated up front, but the damage might be minimal.

The other stock shell, M352 HE, can be neglected as a means to knock out any tanks at all, it doesn't have enough explosive mass to even trigger overpressure against most targets. It might be sufficient for vehicles with open combat compartment, but anything that is thicker than a sheet of steel or aluminum more than half an inch (12.7 mm) can stop this shell with ease.

The M464 APFSDS serving as the M41D's top shell is another story. It is still the go-to ammunition for M41Ds in service, this dart imported from Israel can penetrate 280 mm of armour at point blank range, which does fit ROCA's requirement to penetrate PLAGF's masses of ZTZ59s; and many tanks at the same BR don't even come with any darts; which means M41D can finally handle most tanks it might face at similar BR.

Although having the minimal survivability of a light tank, it is still suggested to bring only 12 rounds as the standby ammo; in case of concerns over missed shots or non-lethal shots on enemies, bring 32 shells at most, which will be located in the lower hull by the center mass.

The M41D retains the same M2HB as its anti-air machine gun; all the characteristics for the machine gun itself are identical to any other M2HB as well. It can be good for handling lightly armoured APCs, IFVs or SPAAGs; it is also a good for gunning down early helicopters with very limited protection in this BR range.

The M1919A4 coaxial machine gun is only good for gunning down exposed crew of vehicles and marking enemies, alternatively as a makeshift rangefinder before the laser rangefinder becomes available.

The M41D is still an M41 in nature, but players will find the under-powered diesel engine very frustrating with bad acceleration over other light tanks; so it might not be the first tank to reach key vantage points for scouting or sniping.

But firepower is what makes the M41D different among its family members; instead of APCR or APDS, it has HEATFS and APFSDS at its disposal; it also comes with a laser rangefinder and a 2nd generation TVD gunner sight which even most tanks at a similar rank could only dream of. Just like every M41, stabilizer is not installed on M41D. Therefore it should be played as any other light tank: go for a vantage point if possible and use its TVD to search for enemies, then harass the enemy with its small yet powerful gun; it is also advised to use the terrain as cover - thanks to the -10° depression angle, it can assault the enemies without being worried about getting hit by a shell.

Stay away from the sight of any vehicles with autocannons - they can tear through the M41D with ease, and avoid fighting tanks up-front unless in dire straits.

The ROCA, after their retreat to the island of Taiwan, used various imported tanks from different military aids, mostly US-built tanks such as earlier M24 Chaffee and some M18 GMC. Since 1958, during the heat of 1st Taiwan Strait Crisis, ROCA purchased 700 M41A1/A2 Walker Bulldogs and 300 M48A1s to strengthen their defences in case the turmoil intensified into all-out warfare; these tanks replaced the older tanks in different armoured units. In 1975 (ROC Year 64，民國64年), ROCA started to reproduce a complete hull of M41, with some efforts made to reproduce the gun as well, the reverse-engineered light tank was first named Type 64 Light Tank (國造64式輕戰車) then renamed Type 65 Light tank (國造65式輕戰車) to avoid confusion with the other Type 64 (M64). While the tank didn't go into mass production, it gave ROCA the chance to build a domestic tank and some designs were retained for further use.

Later, in the 1980s and 1990s, ROCA decided to opt for a NATO retrofit of their M41s, after a long shot plan to buy the new M8 AGS to replace the fleet was scrapped due to budget issues.

The idea for M41D started during the 2nd Taiwan Strait Crisis. In view of aggressive PLA exercises aimed to protest against the talks given by the new ROC government, ROCA was in dire need for an overhaul upgrade of the M41 against possible landing operations from PLANMC, along with the insufficient amount of CM11 and M60A3 TTS on hand.

The M41 light tank improvement project mainly focused on night vision/fire control system and the adaptation of the diesel engine. Two corporations participated in the M41 tank improvement project and 2 prototype vehicles were built and tested. The prototype No. 1 was equipped with a Texas Instruments (TI) CVTTS night vision FCS and a 4-stroke VTA-903TR diesel engine produced by Cummins company, No. 2 vehicle is equipped with the 'M41 tank night vision fire control system' of the domestic Kunyi company and a two-stroke 8V-71T diesel engine produced by Napco company (the letter D of M41D stands for diesel engine modification).

After the bids for the improvements were determined, the first M41D prototype was composed of the chassis of the No. 2 prototype and the turret of the No. 1. The assembly took about a week and cost about NT$20 million to transform a regular M41 into M41D. Only 50 M41D were modified as the first batch due to insufficient funding, but the budget was expected to increase in the future.

The original M32A1 cannon was replaced with a M32K1 gun produced by Joint Logistics Command. The new cannon slightly enlarged the original cylindrical smoke evacuator and moved it backward 44 cm, while the original T-shaped muzzle brake was removed, and a pepper-pot type depressor was installed.

Although the calibre of the M32K1 cannon remained 76 mm, it could fire the high-pressure M464 APFSDS due to the self-tightening design of the cannon, and the muzzle velocity of the projectile could reach 1,400 m/s. The new ammunition could penetrate the frontal armour of Type 59 and Type 69 MBTs that the Communist forces equipped at that time. The M41D light tank was planned to be assigned to the armoured cavalry, the main task of which was to perform search, alert, and cover tasks on the battlefield, or to sweep the beach and annihilate the enemy's lightly armed forces during the initial stage of the enemy's landing, instead of engaging the heavy armour face-to-face. So the new main gun of the M41D tank should be sufficient for future missions.

The CVTTS (Combat Vehicle Thermal Targeting System) night vision FCS equipped by the M41D light tank could identify the enemy and aim at a target from 1,000 m away at night. In addition, a periscope in front of the driver's seat was modified with Starlight night vision goggles to facilitate night driving. The original mechanical ballistic compensator was converted to a digital ballistic computer; the optical rangefinder was also replaced with a laser rangefinder.

The original Allison CD500 gearbox of M41 was retained, and the improvement in the suspension system lay in the replacement of a new torsion bar produced by Joint Logistics Command. Thus, the general manoeuvrability of the M41D tank was greatly improved compared with the original M41A series.

The Ministry of National Defence passed a 20 billion NTD budget for emergency upgrades of existing equipment, where 400 M41A1/A2s with better hull condition would undergo the new M41D upgrade program; after more M60A3 TTS were delivered to ROCA, the whole program shrunk to a 1.2 billion NTD budget and only 50 of these Walker Bulldogs were upgraded into M41D. 6 out of the 50 upgraded tanks were retained at military academies, the remaining ones were deployed on Kinmen Island just off the coast of Xiamen, Fujian; the closest Nationalist-controlled area to Mainland China. Later military reforms decided to have them return to the main island and serve in different units. A recent fatal incident at Kinmen raised concerns as to whether the remaining few M41A2s were safe enough for training, let alone fighting the now-modernized PLA with masses of MBTs; around 20 M41Ds returned to Kinmen and replaced these old tanks, after the decommission ceremony of the remaining M41A in ROCA on 2022/2/25, the remaining M41Ds have to struggle until the new CM34 "Project Leopard (獵豹專案)" and M1A2T could eventually replace them.