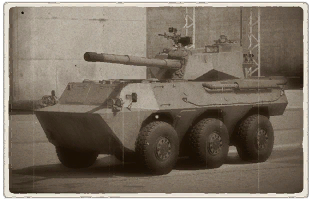 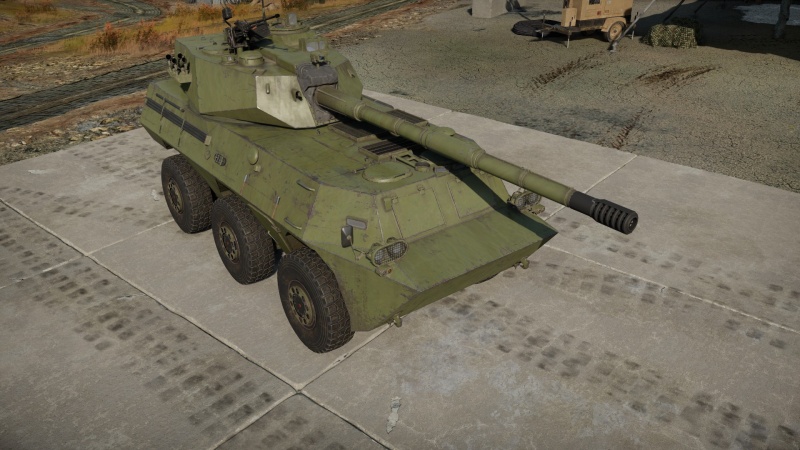 The PTL02 (Simplified Chinese: PTL02 轮式突击炮; lit. wheeled assault gun) is a rank V Chinese light tank with a battle rating of 8.0 (AB/RB/SB). It was introduced in Update "Ixwa Strike".

Based on the WZ551 6x6 chassis developed in early 1990s shared with the ZSL-92 armoured personnel carrier, this vehicle is also the very first wheeled assault gun of the Chinese tech tree. Having subpar speed compared to contemporary wheeled vehicles (at 85 km/h on road) and paper-like protection, it might not be a first rate sniper platform or flanker. It is still significantly faster than all other PLAGF/ROCA vehicles for now. Armed with a high velocity 100 mm smoothbore anti-tank gun, its APFSDS can penetrate 220 mm of flat RHA at point-blank range. This vehicle has thermal sights with acceptable resolution, which can be precious at its BR since it can significantly speed up the seek and destroy process. The PTL02 is less forgiving than other wheeled light tanks, but despite its shortcomings in armour and firepower, it still offers valuable scouting and flanking abilities that complement other Chinese vehicles well.

One of the major drawbacks of this vehicle is the poor protection against any calibre bigger than 12.7 mm since only the turret has more than 20 mm of armour to stop heavy machine gun rounds from some range. Other than that, it's 5 to 10 mm of armour all around. Avoid anything with a HMG or any autocannon vehicles (including aircraft) at all costs, because it is very likely you will not have a second chance to return fire and knock the enemy out.

The PTL02's large profile (it is taller than a Leopard 2) does it no favours when it comes to avoiding fire, but the combination of thin armour and large, empty volume will occasionally frustrate enemies firing subcalibre rounds. Penetration is essentially guaranteed, but minimal spalling is created and a hastily aimed shot may not catch many crew members or important modules in the line of fire. On the other hand, HE shells with a high explosive mass will often transmit shockwaves into the vehicle's interior and knock out the crew with pressure damage. Other chemical rounds like HEAT and HESH might inflict overpressure damage but with a much lower probability. Bombs, rockets, and artillery shells are similarly dangerous.

Powered by a licensed BF8L413F 325 hp diesel engine from Germany, the PTL02 can reach up to 85 km/h ( and -8 km/h in reverse) on roads. This vehicle still lags behind almost all wheeled assault guns in the game (only the M1128 has a worse power-to-weight ratio). This exacerbates the common problem of wheeled vehicles performing worse on soft terrain. Another negative aspect of the PTL02's mobility is the absurdly slow reverse speed of only ~7km/h, meaning it lacks the agility wheeled vehicles should have and will not be able to quickly back out from danger. The PTL02 will not be able to match the Centauro for example in terms of zipping in and out of cover and climbing to unusual vantage points.

To make the most out of the good top speed, it will need to navigate on hard terrain (roads, urban surfaces) for best results. If the PTL02 must be used on hilly and soft terrain maps, try your best not to get stuck since the lack of mobility will absolutely be the death sentence of this vehicle.

The 100 mm PTP-86 smoothbore gun found on this vehicle was a improvement on the earlier Soviet based PTP-73 (Type 73) AT gun with the same calibre. The PTP-86 has similar performance as the Type 69's gun and players can get used to it fairly quickly. Bear in mind the slow reload and poor gun depression. It has a significantly faster turret rotation than the Type 69, which is a plus.

The PTL02 has the same ammunition selection as the Type 69. The stock 1-72-85 APFSDS was at one point the worst round of its type in War Thunder; 220 mm of flat penetration at 10 meters is worse than many AP/APHE rounds. It also suffers noticeable dropoff at long distances. 1-72-85 does have a few good qualities: it has a good muzzle velocity of 1505 m/s and the angled penetration is decent considering the flat penetration, topping out at 127 mm @ 60 degrees. For comparison, the T-55A's 3BM25 APFSDS round has far superior flat penetration (up to 335 mm) but only has slightly higher angled penetration (up to 129 mm @ 60 degrees). 1-72-85 penetrates sloped armour more effectively than flat armour, rather like long rod APFSDS rounds. The post-penetration damage is nothing to write home about but still workable. Spalling is poor, but the round tends to stay intact after penetration and is quite good at detonating ammo racks and knocking out crew members if they are in the line of fire. Memorize the module layouts of enemy tanks to efficiently cripple and destroy them as the PTL02 cannot withstand return fire.

The 1-71-74 HE shell is weak and should be ignored. It has a low explosive content and might be able to cause pressure damage to light targets, but not consistently. Any vehicle with more than paper-thin armour will be immune to it.

The unlockable Type 1973 HEAT-FS is a Tier III modification. Familiar to Type 59 or Type 69 users, it has the same penetration performance as the T-55A's 3BK17M HEAT-FS with a lower TNT equivalent and a slightly lower muzzle velocity. 390 mm of flat penetration at any distance is impressive and will slice through almost all tanks lacking special armour types (spaced, reactive, composite). While it lacks the extra high velocity of the APFSDS and can be detonated by bushes or fences, the HEAT-FS is still good for dealing with heavy targets that the APFSDS can't penetrate. The explosive content is rather low but it might trigger pressure damage occasionally against light targets. Post-penetration damage is somewhat inconsistent, so again, aim for crew members and ammo racks.

The turret-mounted 12.7 mm QJC88A HMG has already become the standardized HMG for most PLAGF vehicles after the 1990s. The main usage of the HMG is to deal with lightly protected vehicles and low-flying aircraft including helicopters. It can also effectively damage gun barrels, tracks, optics, MG, and ERA to assist teammates in destroying enemies, though this may require a lot of fire. Players who dealt with the paltry 50 round belt capacity of the 12.7 mm DShK machine guns of previous PLA vehicles will be happy to know that the QJC88A has a much more generous 150 round belt capacity.

The 7.62 mm MG, on the other hand, is only useful in clearing obstacles such as fences, marking out enemy positions on the minimap, or knocking out exposed crew on certain vehicles (eg. M113 TOW). It lacks the penetration to pierce through even lightly armoured vehicles.

Being a wheeled vehicle and the very first wheeled assault gun of the Chinese tech tree, the PTL02's main advantages lie in its mobility and gun sight.

With its 85 km/h speed, flanking is the key to avoid any direct fire from pretty much any vehicle armed with at least a heavy machine gun. Because of the negligible protection found on this vehicle, take all precautions and avoid rushing into direct fire at all costs, you will not have the luxury of having the second chance to return fire. Being one of the slowest wheeled assault guns in the game, taking vantage points might not be possible considering the inferior top speed that only gets worse in off-road situations. The thin armour and poor reverse speed punish poor positioning, so think carefully about what spots allow the PTL02 to spot and engage enemies without being overly exposed to incoming fire. Complicated terrains are problematic for this vehicle and it tends to do better in urban combat. Any aircraft is a lethal threat, with either guns or rockets, so keep away from their sight. Use smoke grenades to mask your position if there are no buildings or other forms of large cover to hide behind. Helicopters in particular will have an easy time spotting and destroying the PTL02, so do not attract their attention and make use of the heavy machine gun if they get very close.

While the gun does sufficient damage to vehicles at lower tier or lightly protected tanks like the Leopard I, it will have trouble with Cold-War heavy tanks such as M103 or tanks with rounded hulls such as M48 Patton. Bring some HEAT-FS to help deal with such vehicles. Otherwise, memorize the weak spots of enemy tanks and try to flank; contemporary MBTs tend to have poor side armour and even a half decent angle of attack may be enough for the APFSDS to penetrate where typical APDS rounds could not. As discussed previously, aim for ammo racks and important crew members. If an injured enemy is still capable of returning fire, be very cautious and consider leaving them for teammates to clean up. Since the PTL02 is a relatively modern vehicle by War Thunder standards, dating from 2002, it has second generation thermal sights for the gunner with sufficient resolution to help players find targets at a good distance. Oddly enough it is not currently modeled with a laser rangefinder, so the Type 69 is a better choice for sniping at very long distances. Utilize your mobility and the high velocity 100 mm smoothbore gun to clean up any potential flankers while also spotting targets for your team.

Overall, the PTL02 can be put to good use by players who are satisfied with the Type 69's armament and are willing to trade any semblance of armour for increased scouting abilities and better mobility. It is not as adept as the WZ305 in cleaning up a good flank and lacks the ZBD86's incredibly powerful ATGM for sending well-armoured tanks back to hangar, but the combination of thermals, a stabilized gun, and HEAT-FS + APFSDS can prove useful in many situations.

In the late 1980's, the NORINCO corporation successfully tested the Type 87 armoured vehicle. The prototype featured a 6x6 chassis of a prospective Type 90 armoured personnel carrier with a 100mm anti-tank gun. The prototype vehicle successfully passed the tests, but was not put into service.

The army authorities returned to the project in the early 90's, when, in the course of modernization, the PLA began to form mobile motorized infantry formations. This was where the Type 87 researches came in handy: by 2003, on the same 6x6 chassis of the new Chinese armoured vehicles ZSL92 and ZSL92A, a PTL02 infantry support vehicle appeared with a 100mm smooth-bore cannon in the turret. The 19-ton infantry fire support vehicle possessed significant mobility and a weapon capable of effectively destroying fortifications and armoured vehicles, except for modern MBTs.

Mass production of the PTL02 has been going on since 2004, the SPG is widely used by the Chinese army and is produced for export in a version with a 105mm gun, unified for the use of Western-style ammunition.

A Simple Video On A Respectable Chinese Tank Destroyer - PhlyDaily