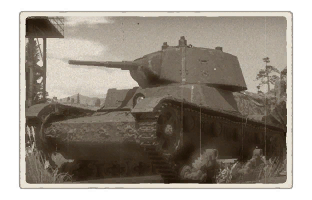 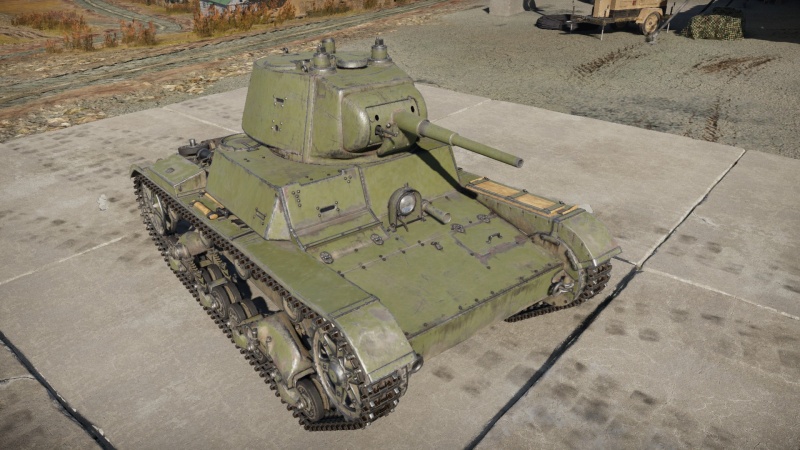 The armour of the T-26 is almost non-existent, making it the worst aspect of this vehicle. Armour is flat and thin on all sides. Do not expose yourself to enemy fire. Crew placement is not lined up from the front, meaning shells without HE filler can take up to 3 shots before being destroyed. Beware of HMGs and autocannons, since they will be able to penetrate your armour. 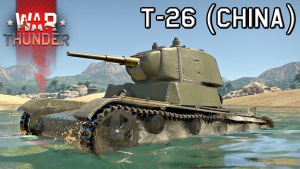 The T-26 is definitely best suited to a more support role, flanking the battlefield and finding a good position to support your teammates from, the 45mm cannon has very good characteristics with its rounds (APHEBC, AP) being able to deal fair damage to enemy vehicles from short and long-range and the fast reload allowing for quick adjustment of aim between shots, this allows the T-26 to be a highly effective flanking vehicle if a good camping spot is found, however, the limited gun depression (-6°) will affect which positions are usable, keeping long-range is certainly an effective way to avoid taking damage. The T-26 is also usable at closer ranges for brawling with enemy vehicles, but it should be kept in mind that the thin armour on the T-26 (≤15mm) will leave the vital modules of your vehicle such as your crew, gun & powerplant (engine & transmission) at risk of taking damage, the mobility of the T-26 is also lesser than many of its counterparts which could potentially put it at risk in a brawling scenario, on the other hand, the T-26's good reload (3.77 - 2.9s) will usually give it an upper hand if you can survive the first shots against an enemy vehicle.

Due to the top speed of the T-26 being less than many other vehicles at its BR (30 km/h), it will usually arrive in the battlefield after the fighting has already begun, this has the advantage of arriving after your team has already identified many targets, and also meaning that you will not be in the front line of attack, this will usually allow for you to last a bit longer than players who rushed the centre of the battlefield, alternatively, it is also less likely that you will reach capture points before they are capped by your faster teammates although there are cases where you can help capture a contested point.

The lack of armour is really something to be kept in mind, even some machine guns (8 mm, 12.7 mm) will be able to go through you thickest pieces of armour (15mm), due to this you want to be trying your best to avoid enemy vehicles getting the first shot, driving undercover is advisable to avoid being spotted and if you spot an enemy vehicle it would be best to engage and destroy them as soon as possible to avoid them becoming a threat, due to the lack of effective armour, aircraft can also be a risk, again, staying in cover will make it more difficult for enemy vehicles to spot and engage your T-26. 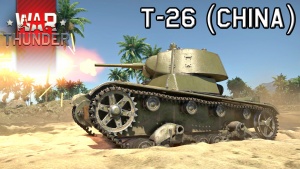 In terms of the T-26's gun, there are 2 round options, the APHEBC round has 70mm best effective penetration as well as 29.26g of TNT equivalent explosive, this will allow for this round to penetrate most armour at this BR and also have good post pen damage if the fuse is set off. Second round type is an AP round, this has 73mm best effective penetration but lacks any explosive filler, this makes its post pen damage less effective than the APHEBC round. More information on these two ammunition options can be found in the "ammunition" section above.

It is also worth keeping in mind that the T-26 only has a reverse speed of 3 km/h, this is something to remember when driving into potential enemy fire.

Pz.II- These speedy, autocannon armed German tanks extremely dangerous. Their fast firing 20 mm autocannons all absolutely shred your armour, and they have better mobility. Generally, it is advised not to engage them, but if you are forced to, then make sure you get off the first shot. The good thing about the Panzer II is that it doesn't have much armour, so you can easily penetrate and knock it out with a single shot. Another tactic is to have a teammate with you, preferably a mobile light tank like the M22 or the BT-5. Your ally can distract the Panzer while you can use your gun to destroy it.

The T-26 light tank design is derived from the British Vickers 6-ton tank. In the early 1930s, a Soviet buying committee travelled to Britain and purchased tanks, tractors, and cars for use in the Soviet Union, of which the Vickers tank was chosen. Fifteen twin-turreted Vickers tank arrived into the Soviet Union in May 1930, equipped with only machine guns. Four more Vickers were delivered at the end of 1930, these being the single-turret variants with a 47 mm gun, and the deliveries were finished by 1932. The Vickers-produced tanks were designated as the V-26.

The Vickers 6-ton tank competed with several Soviet designs for the "most suitable" tank design for Soviet use. One such competitor was the Soviet T-19 light tank, which had advantages over the Vickers design, but also disadvantages. The T-19 designer, S. Ginzburg, suggested for a "hybrid" tank to be built off the features of the T-19 and the Vickers tank. But in January 1931, intelligence picked up that Poland bought up many foreign tanks from Britain and France with a license to mass-produce them. This information pressured the Soviet military council to adopt the foreign tanks into Soviet usage; thus, the Vickers 6-ton tank, under the designation T-26, was accepted into service on February 13, 1931 as a mainstay of the Red Army's armoured forces.

Although outclassed later in the war, it was considered one of the more successful and widely produced tank models in the 1930s. It, along with the BT light tanks, composed of the majority of Russia's armoured forces in the late 1930s. It weighed just a little under 10 tons, had 15 mm thick armour in front, with a 45 mm 20-K gun, and had a crew of three people. The Bolshevik Factory in Leningrad was the first factory to start producing the T-26 from June 1931, and production of the tank lasted from then until 1941. 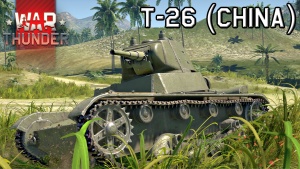 During its production life, many variants were made for different purposes, up to 53 different ones to fit different roles, though only 23 would see service in production. Such designs included changes like a twin-turreted version (some with only machine guns and some with cannons), command tanks, added armour, artillery tanks (such as the T-26-4), flamethrower tanks, remote-controlled tanks, or just armoured carriers to tow artillery and such. Others were simply modified variants of the normal variants such as the T-26E, which was the base single-turreted T-26 design with 30-40 mm appliqué armour made during the Winter War to make them more resilient against the Finnish anti-tank weapons.

In 1937-39, a period of high tensions between the USSR and Japan, the Soviets provided 88 T-26 M33 tanks to China. The T-26, which along with the BT tanks, would constitute three-quarters of the Soviet tank force at the start of its war with Germany in 1941, had been developed from and was very similar to the Vickers 6-ton tank, a model which China had previously bought from Britain. With 20 of those tanks, mostly the Vickers Mark E armed with a short 47 mm gun, fighting with the 1st and 2nd Tank Battalions around Shanghai in 1937, is where most had been lost to the Japanese. The T-26s that came after appear to have been radio-equipped. They were assigned to the 1st Tank Regiment, which had elements attached to the new 200th (Motorised) Division, the first such division in the Chinese army. The 200th division, with at least nine T-26s, was deployed to Burma in the spring of 1942. Most of its tanks were believed lost in that campaign, although they acquitted themselves well. Other T-26 elements saw action in China proper throughout the war.