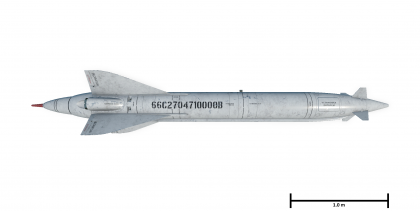 The Kh-66 missile (scale is approximate)

The Kh-66 is a Soviet SACLOS-guided air-to-ground missile. It was introduced during Update "Hot Tracks".

A direct hit is almost always guaranteed to cripple if not outright destroy an enemy tank. It is also able to destroy lightly and even medium-armoured targets with proximity impact.

The Kh-66 is used to perform Close Air Support from outside enemy AA effective range.

The Kh-66 is an early version of the Kh-23 Grom air-to-ground missile. The missile was developed from the existing K-5 and K-8 (RS-2-US) beam-riding air-to-air missiles. Just before the war in Vietnam, the United States began fielding new guided missiles; most notably the AGM-12 Bullpup, which caused the Soviet Ministry of Aircraft Industry to request an air-to-ground version of earlier RS-2-US beam riding air-to-air missile.[1]

This new missile was designated Kh-66 (as the year it entered design/testing was 1966) and began to be used on the MiG-21PFM airframe (itself a testbed aircraft designed in conjunction with the Kh-66). Later in 1968, the missile finally entered service. The weapon was an amalgamation of the K-5 and K-8's guidance and propulsion systems and had an increased warhead for better performance against ground and sea-based targets. While the missile performed at the required specifications set by the Soviet government, the weapon was only a stopgap measure until more suitable armaments were developed. This was due to the flaws in utilizing the weapon as the pilot had to dive towards his target and maintain a lock with the gunsight. The missile was further developed into the Kh-23 by Korolyov again in early 1968 with the intention of making the weapon more effective. With this, the Kh-66 was effectively put out of production for new models by 1973.[2]