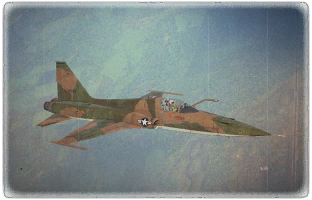 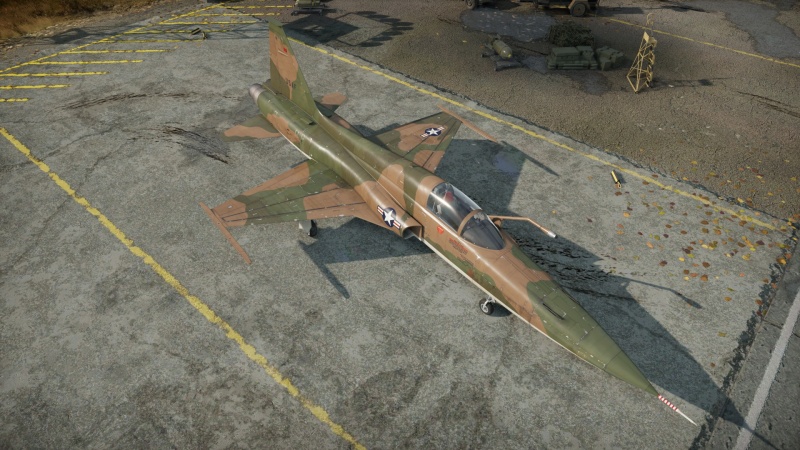 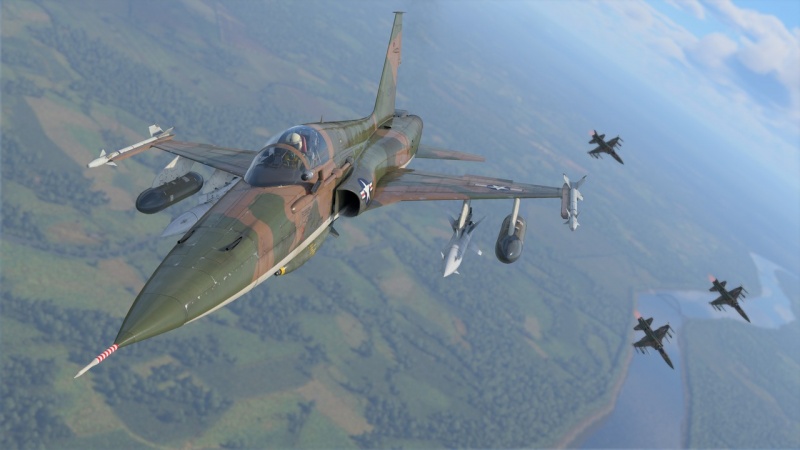 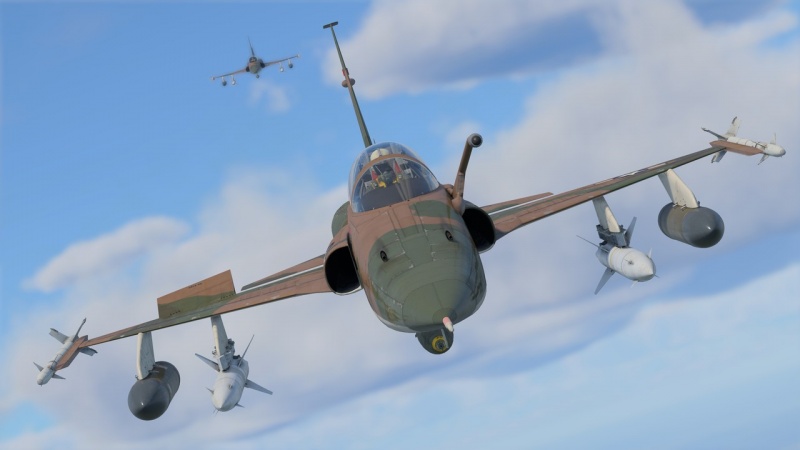 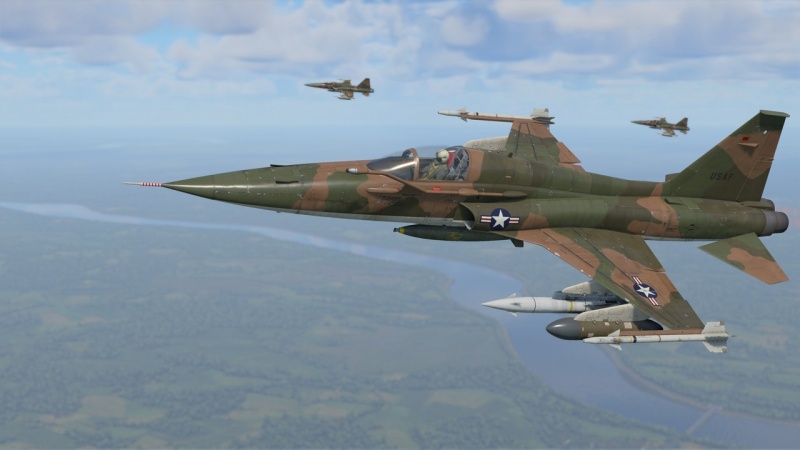 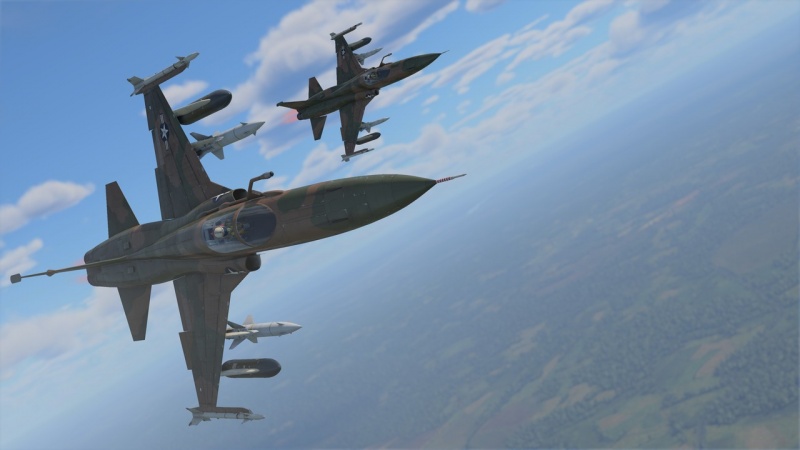 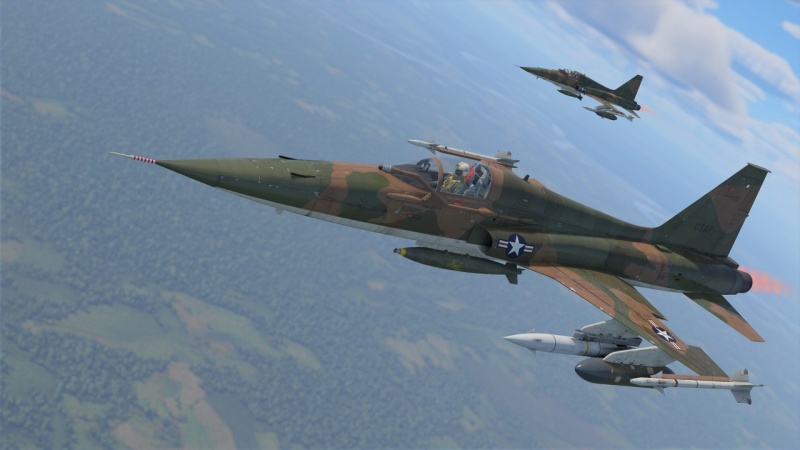 The F-5C Skoshi Tiger is a premium gift rank VI American jet fighter with a battle rating of 10.0 (AB) and 10.3 (RB/SB). It was introduced in Update "Red Skies".

The F-5C is generally an all-round good fighter. It's not the fastest plane and not the most manoeuvrable, but the combination of its decent speed, acceleration, and manoeuvrability make it a joy to fly and fight in.

The F-5C can be outfitted with the following ordnance presets:

In air RB, the F-5C can be played as both a support and offensive plane. In medium range engagements, it plays well as a support fighter, either baiting enemies to use up missiles with the large amount of flares/chaff or launching missiles at enemies who are chasing friendly aircraft to give a chance to let your teammate get in a better position. In close range engagements, with some effort you can stay on the tail of the enemy, if possible making the enemy pull as many manoeuvres as possible to slow them down so you can get a short burst from the respectable 20 mm cannons mounted in the nose. Due to the plane's characteristics, overshooting an enemy won't be the end of a dogfight, the F-5C is able bleed enough speed in a quick turn to get right back on the enemy if they don't take advantage of the overshoot or if they are going too slow to be able to make any quick counterattack.

In mixed ground battles (RB), the F-5C is able to function as a light strike aircraft, while also being able to maintain air supremacy. The F-5C's versatile loadout of air-to-ground ordnance allows the player to choose what range they want to do air support, for example the 4 x AGM-12B loadout is great for medium range engagements against enemy ground units.

In 1965, after the outbreak of the Vietnam War, the US government decided to send troops to South Vietnam to counter the threat of North Vietnamese forces. At that time, many tactical wings of USAF were sent to Thailand and South Vietnam for Operation Rolling Thunder, as well as to support the South Vietnam Army in countering the Viet Cong forces in the South Vietnam. In the meantime, many countries were reluctant to purchase the F-5, as it hadn't yet been adopted by the USAF. Thus, the USAF decided to let Colonel Frank Emory lead a special provisional squadron named 4503rd Tactical Fighter Squadron to take the new F-5 fighters into the Vietnam War, an excellent chance to prove that F-5 could do its job well in regional conflicts: this combat evaluation project was named "Skoshi Tiger".

To extend the combat capability of the Skoshi Tiger, Northrop made some modifications to the original F-5A Freedom Fighter, such as an external fixed refuelling probe on the left side of the forward fuselage that could receive fuel from a KC-135 tanker to extend the combat radius for some long-range missions. The total weight of the Skoshi Tiger's in-flight refuelling system was 85 pounds, but it could be removed if necessary. To improve the survivability of the Skoshi Tiger against enemy ground fire, two 1/4 inch-thick face-hardened steel armour plates were mounted externally on the fuselage, the function of the front plate was to protect the pilot and control mechanisms, and the aft plate protected vital hydraulic and control areas near the tail section, which added 236 pounds to the overall weight, there were five jettison-able pylons in total under the wings and fuselage like the original F-5A Freedom Fighter, other improvements such as better throttle linkage for improved afterburner modulation and the deletion of the rudder limiter were also implemented on the Skoshi Tiger.

The official name of "Skoshi Tiger" is F-5C. Five F-5A-15 and seven F-5A-20 originally destined to allied countries were withdrawn and sent to 4503rd Tactical Fighter Squadron after received those modifications. Some sources claim that USAF wanted 200 F-5 fighters which could be used in Vietnam War, in which the Skoshi Tiger program would be divided into three parts, and 4503rd Tactical Fighter Squadron was the first part who were sent to Bien Hoa AFB to attack the ground targets in South Vietnam.

On 23rd October 1965, Skoshi Tigers of 4503rd Tactical Fighter Squadron finally arrived at Bien Hoa AFB and started their combat evaluation missions. In their first combat evaluation mission on the same day, two Skoshi Tigers each carried four 500-pound bombs and 500 rounds of 20 mm ammunition to strike a Viet Cong concentration, they made five bomb runs and two strafing passes over the target, luckily these two F-5C Skoshi Tigers didn't encounter any anti-air fire in the combat zone at that time. The squadron worked as an independent combat unit until it was attached to the Bien Hoa AFB-based 3rd Tactical Fighter Wing which the latter was equipped with North American F-100D and F-100F Super Sabre fighter.

Through the end of December 1965, F-5C Skoshi Tigers usually flew their combat missions within 40 miles of their home base, and the only loss happened on 16th December 1965 due to the enemy's ground fire. By the end of the month, Skoshi Tigers had flown 1,531 sorties and finished 496 missions in total, they spent 3,110,886 pounds of ordnance against Viet Cong targets and claimed to destroy 1,377 structures with another 1,292 damaged in their Phase I combat evaluation test missions.

After that, 4503rd Tactical Fighter Squadron moved to Da Nang Forward Base for their Phase II combat evaluation test missions, which would test if F-5C Skoshi Tigers could survive in combat zones with heavy anti-air defense in North Vietnam, also providing a wonderful chance for Skoshi Tigers to prove their air combat capability by destroying any North Vietnamese aircraft in the air. However, because the combat operations near North Vietnam were forbidden by the order of the president, Skoshi Tigers lost their chance against the enemy's MiG fighters, so they changed their targets to Viet Cong troops in Laos, and air-refuelling were needed for these combat missions in Laos. From the start of the Phase II combat evaluation on 3rd January 1966 to their end on the 30th, Skoshi Tigers flew almost 400 sorties and successfully destroyed six bridges.

Though the original plan was scheduled that the Skoshi Tiger program would be ended after the end of Phase III combat missions, 4503rd Tactical Fighter Squadron returned to Da Nang AFB on 20th February 1966 again because USAF still wanted to find chances to test the true survivability of F-5C fighters in combat zones with heavy anti-air defense in North Vietnam, also they wanted a chance to prove that F-5C fighters could counter any Communist MiG fighters, so the original Skoshi Tiger program was extended to Phase IV at that time. During the first week, because of bad weather conditions, F-5C fighters were driven away from Laos, but since the weather got better on 1st March 1966, they obtained permission to conduct their combat test missions on the borders of North Vietnam and South Vietnam for the first time. The Skoshi Tigers not only did ground attack role but some of them also carried two AIM-9 Sidewinder missiles to perform air escort missions for allied aircraft, they logged 176 combat sorties on 45 missions over North Vietnam and Laos area, also they spent 5,923 rounds of 20 mm ammunition and 543 M117 750 lb bombs during these combat missions until 10th March 1966.

On 8th March 1966, the Skoshi Tiger program was finally ended, but another squadron called 10th Fighter Commando Squadron was established at Bien Hoa AFB soon after (some sources suggest that they just changed their name from the original 4503rd Tactical Fighter Squadron to the new 10th Fighter Commando Squadron). Seven additional F-5 fighters without air-refuelling equipment were assigned to the new squadron which increased the total amount of aircraft to 18. Some sources say that 10th Fighter Commando Squadron was assigned to 3rd Tactical Fighter Wing of USAF at Bien Hoa AFB until 17th April 1967 and their aircraft and equipment were transferred to the Republic of Vietnam Air Force, but another source claimed that the reason that these F-5 fighters removed their air-refuelling equipment was because the Republic of Vietnam Air Force lacked tankers at that time, also Americans didn't want them to invade the North Vietnam area without a permit, which means it was assigned to Republic of Vietnam Air Force at that time. At that time, Skoshi Tiger's name was retained by the pilots of the 10th Fighter Commando Squadron, also some pilots decided to paint tiger stripes on their flight helmet.

Since the new 57 mm anti-air gun had been introduced into the North Vietnam Army by the end of 1966, the NVA finally found their approach to fight against the F-5C Skoshi Tiger formations at medium to high altitudes. From 8th March 1967 to 17th April 1967, the 10th Fighter Commando Squadron conducted 7,321 combat sorties, and 7,537 hours had been flown, including close air support and against missions enemy supply routes. A large amount of munitions had been expended by Skoshi Tigers for these combat missions, including 9,777 napalm canisters, 875 CBU bombs, and 778,566 20 mm rounds, and eight aircraft had been lost, including six aircraft due to ground fire and two aircraft due to engine failure. Seventeen aircraft had received battle damage. 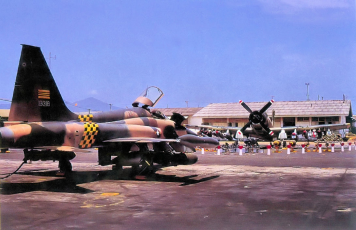 As the Vietnam War was finally ended in 1975, the new Vietnam government decided to transfer some American military equipment, such as F-5 fighters, A-37 attackers, and UH-1 helicopters, to the Soviet Union and China in exchange for more support. In China, the captured F-5A Freedom Fighter sent by the Vietnam government was tested with their own J-6 fighter, and it was found that the air combat performance of F-5A fighter not only could completely match their own J-6 fighter, but it also had much better ground attack capability, apart from that, the manufacturing process, aerodynamic design, airborne equipment and other parts of the F-5A fighter also had left a deep impression on Chinese aircraft engineers.