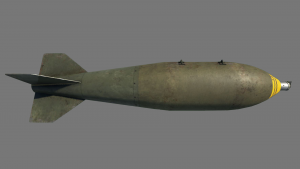 Describe the type of damage produced by this type of bomb (high explosive, splash damage, etc.)

This bomb is very good at destroying bases and can be used against lightly-armoured targets in ground battles due to its large amount of explosive. However, it may not be so easy to destroy top-tier Russian MBTs because of their ERA.