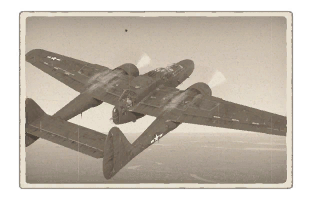 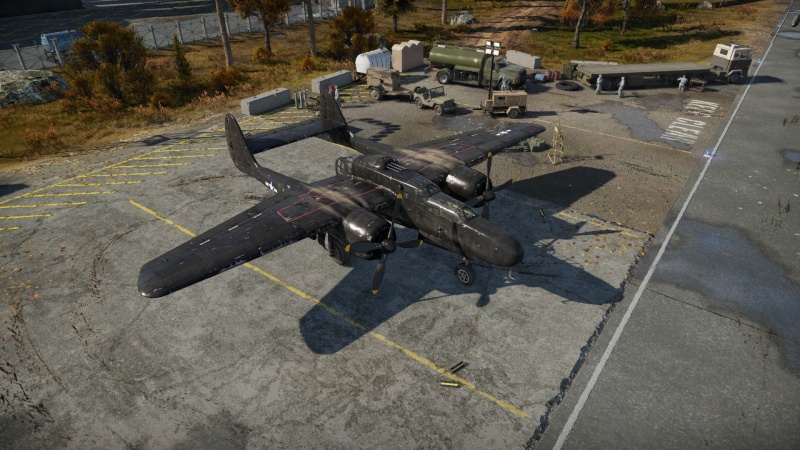 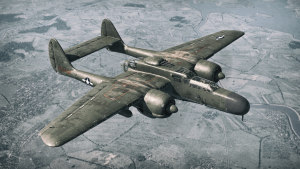 The armament configuration of the P-61C-1 is unique compared to most fighters which either utilise nose-mounted or wing-mounted guns. The Black Widow incorporates two weapon systems, the first consisting of four 20 mm AN/M2 autocannons mounted in the belly of the aircraft with 200 RPG, or 800 rounds total. Convergence is not a factor when utilising these guns. The aircraft also incorporates a dorsal turret outfitted with four 50 calibre machine guns (2,120 rounds or 530 RPG), which can be remotely operated by the gunner or the radio/radar operator. The turret has 360-degree mobility and can fire at elevations up to 90-degrees. The turret cannot depress lower than horizontal or else it would risk firing into the wings, cockpit, tail booms or tail section. The dorsal turret is utilised for both offensive and defensive uses. 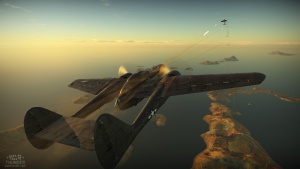 The P-61 climbs very well compared to twin-engine fighters from other countries. The engines overheat very slowly even when stock, while never really overheating at all when fully upgraded if using MEC or just being careful with the control of the engines. The turn rate is very slow, but to be expected from a twin-engined heavy fighter with a turret. The air brakes are very efficient, helping you slow down quickly in dives or when landing. 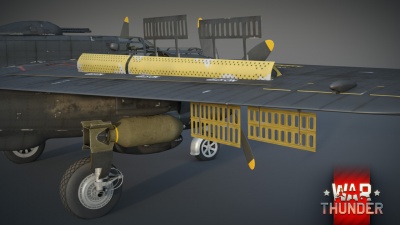 The pilot is afforded protection through the bulletproof canopy windscreen which is 60 mm thick and a 12.7 mm steel plate located directly behind the radar unit in the nose. These two items will aid to protect the pilot in the event a bomber or attacker's defensive gunners fire on an attacking P-61C-1, however, note that these protections will wane in their ability if the pilot of the Black Widow decides to take another aircraft head-on, especially if that aircraft is sporting 20 or 30 mm autocannons.

The P-61C-1's gunner sits directly behind the pilot, however, his station is slightly elevated giving him an unobstructed view of the front and side of the aircraft, allowing him great visibility to be able to aim and fire the machine gun turret. Since the gunner station is elevated, the gunner is exposed to incoming fire which the pilot's protective plate and armoured windscreen will not cover. To remediate this there are two 12.7 mm steel plates which the gunner can swing in front of him for protection or out of the way when not in use.

The P-61C-1 is typically used as a night or strike fighter which is used to sneak up on unwary targets and destroy them with the four forward-facing 20 mm autocannons, however, there is an opportunity to mix it up as a multi-role aircraft and outfit the plane with bombs. There are four external hardpoint pylons in which either 500 lb or 1,000 lb bombs can be loaded for a total of either 2,000 or 4,000 lbs of bombs. With payloads like this, the P-61C-1 can rival the B-25 bombers in their payload deliveries. Unfortunately, for a strike fighter, the P-61C-1's flight performance and manoeuvrability suffer when adding the extra 2,000 or 4,000 lbs of weight and can be a challenge to fly when attacked, however after the bombs have been released on their target, the P-61C-1 can get back to its heavy-fighter role. 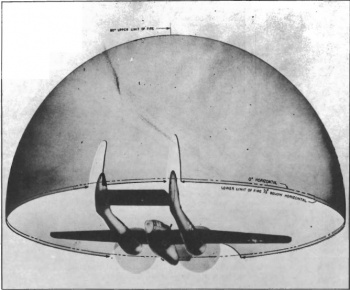 The cones of fire for the upper machine gun turret on the P-61C-1. 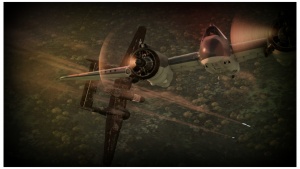 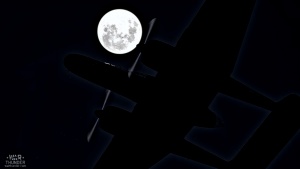 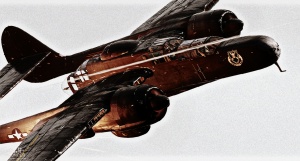 P-61C is the final production version of the P-61 family with the production primarily in 1945. The most notable changes are the turbocharger fitted under each engine and the redesigned larger propeller system. With the turbocharger made by General Electric, the Pratt & Whitney R-2800 engine could output 2,800 hp each. Alongside the larger propeller, P-61C could perform much better at higher altitude. The 4 hardpoints under the wings for external fuel tanks and bombs from the P-61B variants were also kept, allowing the P-61C to not only perform as a night fighter, but also as a night intruder. Airbrakes were also added so P-61C would not overshoot its intended targets.