Difference between revisions of "Boston Mk I (Great Britain)" 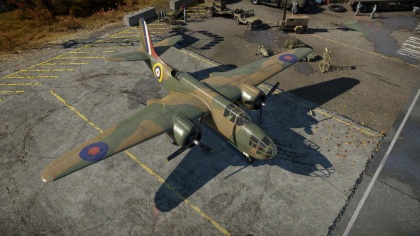 The ▄Boston Mk I is a rank II gift British bomber with a battle rating of 2.3 (AB/RB/SB). This aircraft has been in the game since the start of the Open Beta Test prior to Update 1.29.

The Boston Mk.1 is a very fast aircraft for its rank, this being coupled with its current Battle Rating of 2.3 means that in a decent matchup it can often outrun most if not all the aircraft it faces in level flight. The Boston has got four 7.7mm guns in the nose and two 7.7mm in the top and bottom lower and upper of the rear fuselage.

Although the defensive armament may seem rather underwhelming, if it faces lower BR planes they can be more than adequate and can still be made to work against higher level planes. You should load a belt made up of either armour piercing or armour piercing incendiary rounds and aim for the engine of enemy plane(s) that are on your tail; this will likely do one of these things: 1) Destroy the enemy plane's engine 2) Set the enemy plane on fire 3) Knock out the plane’s pilot (from shots that go astray).

The Boston Mk I (Great Britain) can be outfitted with the following ordinance:

Unlike other bombers, the Boston usually has to take off from the runway. Instead of climbing you should fly about 100-300 meters above the ground and focus on building up speed, as although the Boston has a good top speed of up to 450kph in level flight (with WEP) it can take a while to reach it. You should fly at a low level and bomb tanks/light pillboxes and use the machine guns to kill soft targets such as armoured cars, AAA and artillery. The machine guns can also be effectively used to shoot down enemy planes should one appear in the right place. As the Boston is a premium plane when it is used to kill ground targets it becomes an extremely effective researcher at mid to low tiers and can even be a useful plane for researching tier 4s earning about 1,000 research points on a fairly good game and above 2,500 research points in a really good game, this is possible due to the massive number of ground target you can kill (upwards of 20 dependent on map and luck).

The Boston can withstand a large amount of damage and although not easy can return to base critically damage and without and engine. The plane can soak up 7.7mm fire well however prolonged fire will eventually cause problems and fire form 12.7 mm guns will do damage. German 20 mm cannons will cause the tail to fall off after several shots to the rear of the aircraft, dependent on ammo type.

Only the "Mark of distinction" can be researched and unlocked, which grants the ability to place and show four decals without having a premium account. It is recommended to upgrade the crew qualification and have a second trained gunner as it improves the plane further.

The Douglas Boston Mk.I/Mk.II was a twin-engine light bomber/ground-attack aircraft which was initially developed for the United States Army Air Corps, but first entered service as an export model.

The first customer for the aircraft was the French government, which designated the bomber the DB-7 and ordered 100 aircraft. A contract for a second batch of 170 aircraft was finalized with the Douglas Aircraft Company; these machines differed from the first batch by being equipped with Pratt & Whitney R-1830-S3C4-G radial air-cooled engines with two-speed superchargers that delivered better performance characteristics at higher altitudes, thus increasing their maximum speed. The maximum power of the new engines was raised to 1,200 hp.

The aircraft that had not been sent from the USA before France was defeated were diverted to Britain for use by RAF Bomber Command. The RAF renamed the aircraft as the ""Boston"" to indicate its American origin.

The new Bostons required several modifications for British use: the instruments, which had been set to the metric system, were replaced. Throttle quadrants made according to the French standard were redone, and British radio sets and oxygen equipment were installed on the aircraft.

The defensive armament was also replaced: the forward fuselage now had four 0.303 inch Colt-Browning Mk.II machine guns with 500 rounds each, fed by disintegrating belts. The radio operator/gunner's cockpit had two 0.303 inch Vickers K machine guns with pan magazines and 470 rounds each; the first was located in the rear upper gun position, and the second in the lower hatch.

According to British pilots, the Boston had excellent handling characteristics and good visibility from the cockpit and the aircraft's tricycle landing gear made take off and landing significantly easier.

As the Boston’s performance and manoeuvrability came at the price of a short range, the RAF did not use the Boston for its original role; instead, many were converted into heavy night fighters or used in anti-shipping or as night time intruders over occupied Europe. In addition, some aircraft were used for training and auxiliary purposes.

A total of 131 machines from the second batch of DB-7s ordered by France were transferred to the RAF. After the successes in RAF service, the Boston was adopted by the United States Army Air Corps, the service it was originally designed and intended for.