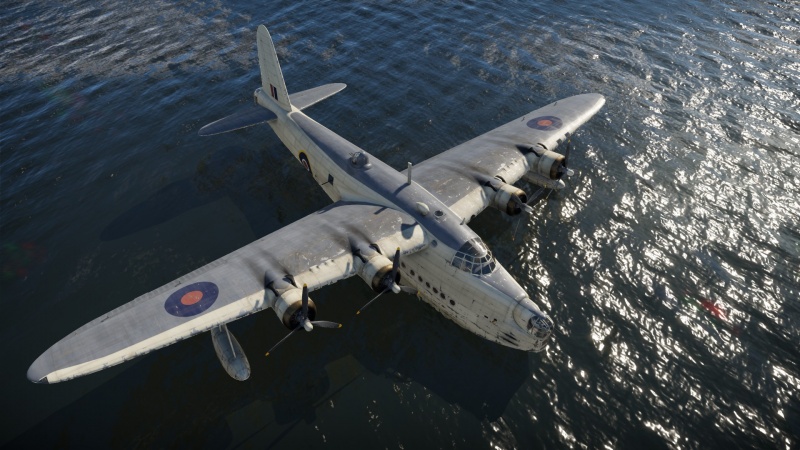 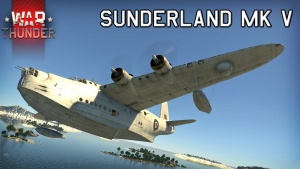 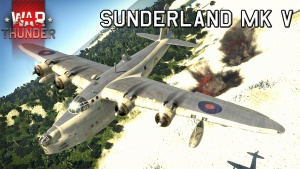 Sunderland flying away from its bombed target.

At this low altitude, and with some degree of luck, the Sunderland can be used as a "gunship" fighter. It's possible to gunship manoeuvre into a furball and shoot down a plane or two. Against other bombers, attempting the "gunship" method is possible, however you must be careful of defensive weapons on the enemy bomber. The best bet is to fly just below the enemy fighter or side by side, as there are no bombers at this battle rating which have this kind of armament and the Sunderland's survivability against rifle calibre is exceptional. The forward MGs can be used, but it isn't as effective as the other turrets. The side of the aircraft is where all the main firepower is located. Knowing this, keeping your enemy in the top and rear hemisphere is advisable for maximum guns on target while being shielded from most defensive weapons. 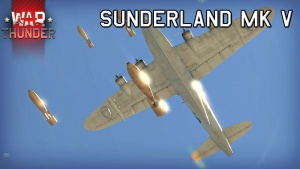 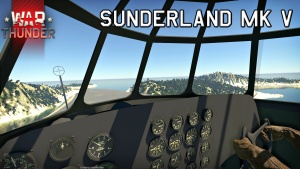 Cockpit of the Sunderland Mark V

The Short S.25 Sunderland is a British designed & built flying boat, designed primarily to fulfill the role of a patrol bomber, the Sunderland was used primarily by the RAF, but also saw use with the French Navy, RAAF & SAAF just to name a few. The Mark V version of the Sunderland was initially developed due to concerns that the aircraft was underpowered, due to this the Bristol Pegasus engines used on previous models were replaced by Pratt & Whitney R-1830 Twin Wasp (S3C4-G) engines, these new engines offered a considerable power increase while also not causing any reductions in range or flight time, a particular benefit of the new power plant was that the Mark V could remain airborne after 2 of its 4 engines failed, this greatly improved the aircraft's survivability in comparison to earlier versions. A total of 155 Mark V airframes were produced with an additional 33 earlier Mark III's converted to Mark V standard with the updated engines.

The Mark V also featured a new centimetric ASV Mark VI C radar, this is an updated version of the air to surface radar that was also featured on later production Mark III airframes and is especially noticeable by the antenna on the underside of the wings just outboard of the floats. This radars was primarily used in the aircraft's coastal command role for detecting enemy ships.