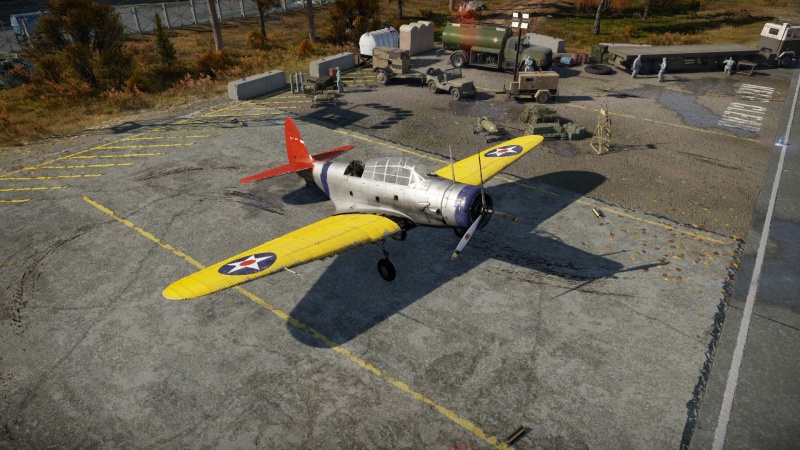 The lone offensive machine gun does not offer much, but can be effectively used to pick off damaged ground targets or even damage a critical module on an enemy fighter. The lone rear-facing dorsal machine gun is not a miracle worker, though it does a good job of making it difficult for enemy fighters to sit on the TBD-1's tail. The aircraft is quite manoeuvrable and can quickly whip around to attempt a second bombing run on a target if there are any bombs left over. Though state-of-the-art when developed, this bomber was quickly outdated, but that did not stop it being kept in service at the beginning of World War II. While in War Thunder this bomber might seem to be an easy target for new pilots, those with some practice under their belt can utilise this as a very effective early bomber, racking up destroyed ground vehicles and anti-aircraft artillery targets. You can also use the fact that you look like a fighter to blend in. 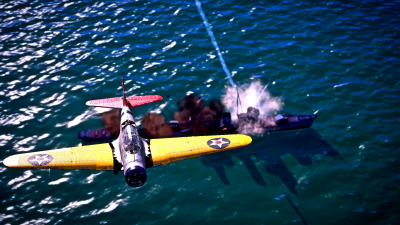 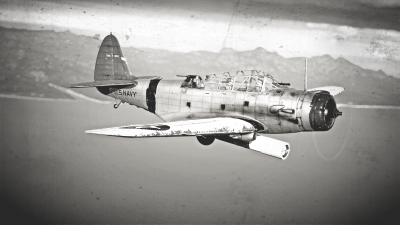 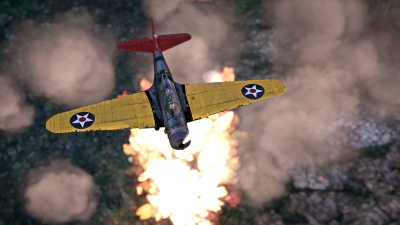 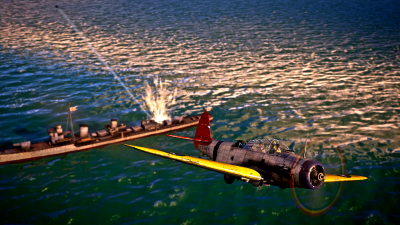 The first thing a pilot will notice about the TBD in gameplay is its "rubber-banding" tendency to return to a stable speed of about 250 km/h. The aircraft has mediocre energy retention, especially in a turn or when coming out of a dive. However, it is a stable and easy plane to fly, even in Realistic Battles. Strangely enough, the TBD has awesome acceleration from a standing start. The acceleration peters off after about 140 km/h (just above its stall speed) but makes it a nice plane to take-off, especially from carriers. The armament on this plane is very bad and will get shot down if engaged with a fighter. The TBD is a very attractive target for fighters so climb to an altitude of 5,000 m. When dropping bombs, decrease your throttle to 50% as the bombs are more accurate when flying slow.

This aircraft is best used in a ground strike role, carpet bombing ground targets with a large quantity of smaller bombs available out of the box, and in this role, it performs respectably. It features a single 12.7 mm MG attached to the starboard side of the engine, with a generous ammo load, but although the TBD has a good turning radius it is not recommended to engage as a fighter. A rear gunner also wields a 7.62 mm MG with a good coverage angle but no coverage under the tail. The 7.62 mm MG is a welcome addition to keep enemies off the TBD's tail but its rate of fire and damage potential are quite mediocre. Aim precisely if you want to hit and spare your ammo. Of special mention is the pilot's telescopic sight, which is at best a novelty in air battles but is immensely useful in realistic tank battles, where one can easily scan and nitpick otherwise hard to discern enemy tanks. Be careful not to get too stuck in tunnel vision and forget to pull up or evade enemy fire.

A total of 129 TBD-1 units were purchased and delivered to the U.S. Navy and were farmed out to several aircraft carriers such as the notable Enterprise, Lexington, Wasp and Hornet. Unfortunately, the Navy realized by 1940 that the Devastator was not the frontline bomber it needed and its replacement the Grumman TBF Avenger was not yet at a stage where it could be operational. Though outclassed by many Japanese fighters, the TBD-1 was still pressed into active service, however, as an example, 41 were deployed during the Battle of Midway with only four returning to the carriers. Though other factors contributed such as miscommunication and uncoordinated sorties, the Devastators flew without fighter cover and were easily picked off when lining up for torpedo runs often flying in a straight line at around 185 km/h (115 mph). Ship batteries also had an easy time bearing down on these slow and predictable torpedo runs. Though, the attacks were not a complete waste, as the Devastator attacks tied up the Imperial Japanese Navy and their protective fighters which allowed the late-arriving SBD dauntless dive bombers to inflict massive damage on the IJN carriers with very little resistance allowing them to carry out more effective attacks.