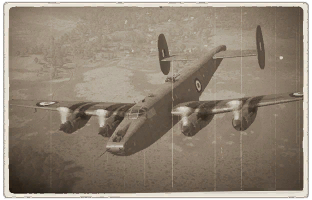 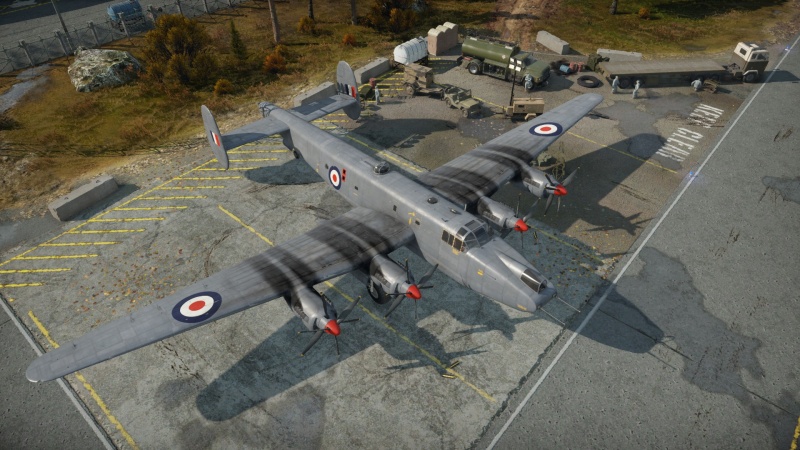 The Shackleton MR.Mk.2 has large wings where the fuel tank are located. There are two pilots and eight gunners in total, but only two use turrets, the top gunner and the nose gunner, if the top gunner is taken out the Shackleton becomes much easier to kill. There is only one steel armour plate of 8 mm covering the roof turret gunner.

The Shackleton MR.Mk.2 can be outfitted with the following ordnance:

The 15 x 1,000 lb M.C. Mk.I loadout is ideal to destroy bases and airfields. Only 5 bombs are required to destroy normal bases and 3 to destroy weaker bases. A squad of 3 Shackletons is capable of destroying all bases and the airfield without landing on some maps. Given that most Air RB maps at its BR consist of respawning bases with a prevalence of attackers, you will rarely be able to drop all 15 bombs on bases without having to wait for at least 1 to respawn

The Shackleton MR.Mk.2 is defended by:

The 20 mm cannons are mounted at the front and on top of the plane leaving directly behind and below very vulnerable.

Following the end of WW2 and going into the Cold War era, submarine development had picked up so much momentum that the previously used submarine counters quickly became obsolete. In addition to this, Britain was faced with a lack of capable long-range maritime patrol aircraft after it was forced to return the lend-lease B-24 Liberator bombers it received during wartime. A stopgap solution in the form of a modified version of the Lancaster bomber was created, but the need for a dedicated maritime patrol aircraft became more and more emphasized in the postwar period.

Development of the Avro Shackleton began in 1945 after the British Air Staff expressed an interest in the conversion of the Avro Lincoln bomber into a general reconnaissance as well as rescue aircraft. As a result, the Avro Type 696 was designed. The Type 696 was primarily based on the Avro Lincoln bomber, but also borrowed some design solutions from the Avro Tudor airliner, of which the latter two themselves were derivative designs of the famous Avro Lancaster. The first prototype, designated Shackleton GR.1, successfully performed its maiden flight in March 1949 and was shortly afterwards ordered into production.

The Avro Shackleton entered service with the RAF in February 1951. The aircraft performed several roles, ranging from its primary role - maritime reconnaissance - over escort and transport duties to search and rescue, whilst being employed all across the globe. However, the aircraft saw numerous modifications during its lifetime, aimed at increasing its capabilities and addressing reliability and structural problems, although at the expense of added weight. The Shackleton and its variants continued to serve throughout the Cold War era, and in the late '80s the Avro Shackleton was finally considered obsolete.