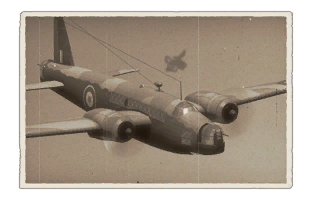 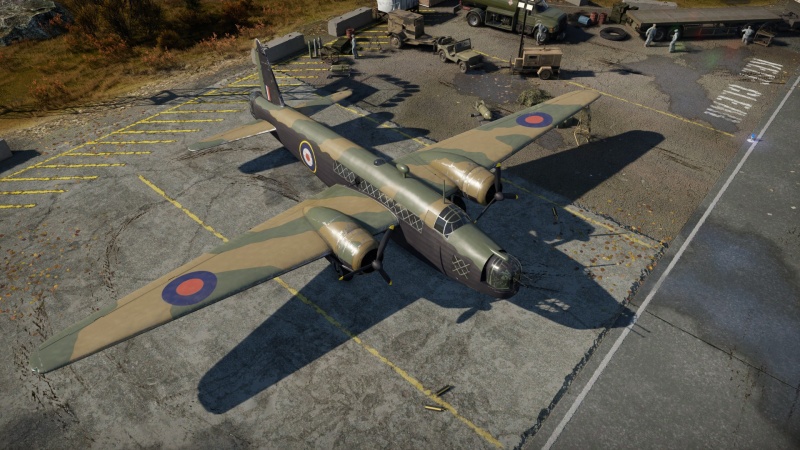 The Wellington Mk Ic has no armour protection. The fuel tanks, oil coolers, and engines are all located in the wings. The crew are spread throughout the fuselage. Due to the lack of armour the crew, especially the gunners, are very vulnerable. This could lead to enemy fighters quickly disabling your gunners and leaving you defenceless.

The Wellington Mk Ic can be outfitted with the following ordnance:

The Wellington Mk Ic is defended by:

The major weakness of the Wellington Mk Ic is its lack of defence, however it offers good speed, survivability and payload options.

In ground battles, it is recommended to use the single 4,000 lb "Cookie" bomb. This bomb allows for destruction on a scale which the poor tankers can't comprehend. The Cookie bomb has 1,339 kg of Amatol explosives, allowing for any tanks gathered in a cap zone or (in a close environment) as long as the bomb lands in close proximity, the entire zone will be blown apart and their poor tanks will get knocked out.

When you spawn in game, descend fast towards a large grouping of enemy tanks and drop your payload, then withdraw to the airfield and rearm. Make sure you have set a bomb delay of 2-3 seconds or the shockwave from the bomb will rip you apart. The other playstyle for this mode is to climb high and circle around the map then wait for the enemies to gather in the cap zones or to group up and drop a 4,000 lb Cookie bomb on them.

The two torpedoes should ideally be used, they are able to sink the biggest of ships from battleships to small coastal boats. Using the the torpedoes, come in from the side and try to predict where the enemy ships will be heading and drop them. The torpedoes do not drop in pairs, but individually, so with good placement and patience two ships can be sunk.

Using the 500 lb or 4,000 lb bombs or other bombs which can be used, either dive on the ship or straight and level then drop them all together on one target, since the ship will be turning hard to port or starboard to avoid your bombs.

The Mk Ic was the second most produced variant of the Wellington, at 2,685 airframes built between 1940 and 1942, and while virtually identical to the Mk.Ia, featured the removal of the ventral turret and replaced them with two machine gun positions firing from the sides. Initially, Vickers "K" machine guns were used, located in front of the wings, but the majority of Mk Ic aircraft carried a pair of Browning .303 machine guns located further back on the fuselage. While also featuring improved hydraulics and electrical systems, the aircraft was also the first version of the Wellington to feature Lorenz Blind Landing Equipment. Production of the Mk Ic proceeded into Autumn 1942, with an entrance into service in April 1940 as a night time bomber as daylight bombing had been ceased at that point.