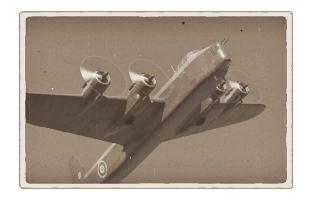 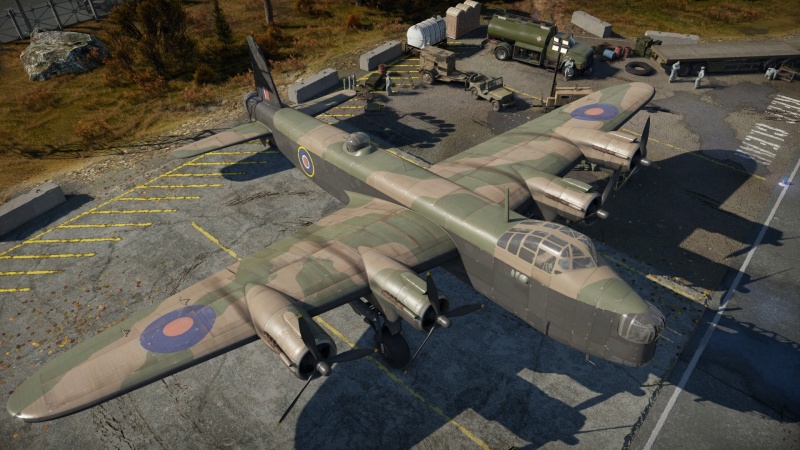 The general flight performance of this aircraft is poor, similar to the Stirling B Mk I, although slightly improved. The Stirling has a very poor climb rate, especially when stock. The turn time is sluggish, as well as acceleration and top speed. Without performance upgrades, this aircraft will struggle to climb at all while carrying a payload. And when it has its maximum payload, the Stirling will struggle massively with gaining altitude. Side-climbing is an absolute necessity in order to reach a safe altitude.

Being a large bomber, the Stirling has a very slow roll rate and a huge turn radius, making manoeuvres long and sluggish. It also can be difficult to control, especially in SB.

The survivability of the Stirling B Mk III is very poor. Any encounter with a fighter or bomber hunter will end badly. The entire structure is relatively weak, and it won't take many cannon rounds to tear off the tail or a wing. The fuel tanks are vulnerable and catch fire easily too. For armour, there is a 9 mm plate in front of the cooling systems of each engine, and a 8 mm plate protecting the pilot from rounds coming from the rear of the aircraft, protecting only from rifle-calibre machine guns.

Due to the engines being radial, you do not have to worry so much about cooling as there is no liquid cooling system. Oil leaks and high temperature are still a concern though.

If a player does decide to sit on your rear, you do have six 7.7 mm machine guns that can shoot in that direction. Good preparation and a few well placed shots will quickly shred them, if they have not destroyed you first.

The Stirling B Mk III can be outfitted with the following ordnance:

The stock payload of twenty-seven 250lbs, while large, is poor for base bombing. The loadout of twenty-seven 500 lb bombs is excellent for hitting multiple bases that could be damaged, and allows the Stirling to attack a colossal number of ground units in a single flight. The maximum payload of nine 1,000 lb bombs is a loadout that can kill 3 bases in a single flight at rank III. A group of Stirlings can decimate an enemy team's ticket count.

The Stirling B Mk III is defended by:

The Stirling has a pitiful defensive armament. The 7.7 mm MGs struggle to damage any aircraft at rank III, with well-armoured fighters and interceptors being nearly impossible to take down quickly. The firing arcs on the guns are good, but the lack of a ventral or belly turret means any attack from below is impossible to defend against.

The Stirling B Mk III is very large and very heavy. However, it has the ability to carry the heaviest bombload for its rank with the 9 x 1,000 lb preset, allowing it to take out all three bases in a single fly-out.

The defensive complement of eight 7.7 mm machine guns in total is generally insufficient against common aggressors. The turrets do not have 360° coverage, notably the majority of the underside of the aircraft is completely undefended. Try to keep any opponents above and behind you, allowing both the dorsal and tail turrets to target them together, maximising your potential firepower. However, the low-calibre machine guns are rather underpowered, so cannot be relied upon barring some lucky hits into their pilot or engine.

The Stirling B Mk III has 4 engines with enormous wing surface area, giving it a reasonable climb rate though it can struggle when equipped with the heavier bombloads. Fortunately, the control surfaces are extremely large as well, which helps a lot with controlling the plane.

The Stirling has a huge payload but delivering it may be challenging, as it lacks the defensive armament, survivability, or flight performance of its contemporaries. Avoid enemy aircraft at all costs. Going straight to bomb an enemy base as soon as you spawn can sometimes net some quick RP, but don't expect to survive for long. Instead, side-climbing and utilising cloud cover is often the better option to stay hidden all the way to the bases. If forced down, try to fly at tree-top level to make yourself a more difficult target to hit, as well as preventing any enemy aircraft from sneaking around under your unprotected belly.

Any fighter is very dangerous for the Stirling, particularly any aircraft equipped with cannons (though large-calibre machine guns are still a threat). Common opponents can include Bf 109s, Fw 190s, G.55s, Do 335s, La-7s, and A6Ms, as well as any heavily-armed heavy fighters climbing specifically to prey on easy bombers such as the Stirling. If any heavy fighter or bomber hunter reaches you, you can expect to be sent back to the hangar immediately.

Tactics are not required to down a Stirling B Mk III. However, to maximise efficiency, it is recommended to aim for the wings, increasing the chances of an engine or fuel fire, or simply breaking the wing itself, while the large, empty fuselage can sometimes soak up rounds. The defensive machine guns aren't too much to worry about, as long as you keep moving to avoid allowing multiple shots into critical components such as your pilot or engine, but you should attack from below if possible, as turret coverage is severely limited below the aircraft.

Designed in the late 1930s by the Short Brothers, the design of what would be the Stirling met the demands of the British Air Ministry, which in 1936 called for the need of a long range, high speed, four engine bomber as described by Specification B.12/36, which would go from design to manufacturing in a short period of time.

A prototype, designated S31, was delivered by 1938 and on September 19, 1939 had its maiden flight. While the maiden flight was impressive, an accident during takeoff as the result of imposed modifications marked the end of the airframe, and was subsequently scrapped. An earlier built prototype, the S29, took its place and was therefor ordered into production as an "off the drawing board" design. This prototype had its maiden flight on May 14, 1939, and a second later prototype airframe was redesigned with adequate modifications and soon took its maiden flight on December 3, 1939. This aircraft, during its first sortie, lost an engine but was soon able to return to base safely.

With the Luftwaffe's strength as well as the risk of war growing, it prompted the initial order of 200 aircraft to skyrocket to 1,500. The first few of these, the Mk.Is, were powered by four Bristol Hercules XI radial engines, but later production aircraft were fitted with higher 1,500 HP variants of the same motors, giving it a comfortable speed of 255 mph. Later Mk.III variants were fitted with even greater output engines, pushing out 1,635 HP with its Hercules VI engines which featured improvements over last variations, and gave the aircraft a top speed of 277 mph. Capable of a bomb-load of 14,000 lbs, it was the double that any of which was produced by the British manufacturer, and also featured a seven man crew with a 4,000-mile range which, was equally impressive with a 2,300-mile range with 10,000 lbs of ordnance.

On May 7, 1940, the first production Stirling had its first flight, but introduction into service was hindered by relentless Luftwaffe bombings, and pushed back to August that same year before No.7 Squadron based at RAF Leeming received their first aircraft. Although it had a rocky start, the Stirling had a great number of deployments by June of 1942, which by May 1943 the aircraft had flown hundreds of bombing missions over Europe. Including the invasion of Normandy, Operation Market Garden, and Operation Glimmer, the aircraft was used extensively and heavily throughout the war to hammer back Axis powers. By the end of the Stirling's service, the aircraft had flown a total of 14,500 sorties and dropped 27,000 lbs of ordnance, with 582 aircraft shot down and 119 further lost to simple write-offs.