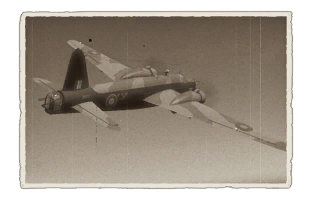 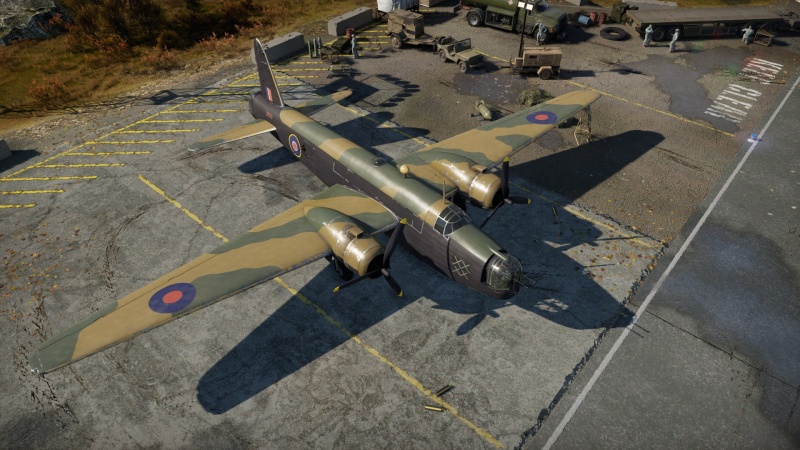 The Wellington Mk III can be outfitted with the following ordnance:

The Wellington Mk III is defended by:

In Air Battles, the winning tactic is to climb high and bomb your targets. If you don't want to climb the Wellington Mk III, is a great low flying bomber, offering great speed and manoeuvrability. However, it lacks any armour and only offers limited protection with turrets in the front, side and rear. It lacks armour plates, unlike other bombers of the other nations. A few well placed shots will see Wellington Mk III, getting torn apart to any aircraft which drop down to engage it from the top or belly. However, its rear gun turret offers four 7.7 mm machine guns which are able to shoot down the enemy aircraft with a few well placed shots.

"Torpedo attack!" The best way to launch a torpedo at close range without sacrificing the aircraft, is to find the middle ground between the suggested drop direction and the target. That way making the evasive action of the torpedoes, harder. Whether the target slows down or turns, The torpedoes will be on collision course

Using the Wellington Mk III should be used as a strategic bomber, that is what it excels at in this game mode. It is too big to be used in the ground attack role, making it an easy target for enemy tankers. To use the Wellington Mk III, load up on 500 lbs or the single 4,000 lbs cookie bomb. The 500 lbs, offer 65.5 Kg of HE filler and the cookie offers 1,339 kg of explosive filler.

Fly around the map, waiting for the enemy to cap the cap zones, when they start capping the zone - head towards it while gaining altitude. Do not come in low as a single shot fired from a tank can knock you out of the game. Once at a good height, line up on the cap zone and drop the bombs. Any tank in the zone will be destroyed.

All of the Wellington bombers are well suited for the naval warfare, The Wellington Mk III being one of the best of them provides improved Browning turrets, highest top speed of them all and two supreme payloads that will allow you to change the tides of a naval war in both Arcade and Realistic battles.

With the torpedoes, the strategy goes in finding a good approach angle to successfully deliver both torpedoes to preferably gunboats and destroyers as they will have a tougher time evading them. Beware of anti-aircraft fire and swiftly turn back to safety while preparing the next drop.

The technique at the moment of launching the torpedoes is shown in the image: "Torpedo attack!"

Using the 4,000 lb bomb, the scenario takes place a bit higher. Way above the enemies' short and medium anti-aircraft guns that reach around 3,000 - 4,500 m altitude. Here you will be able to spot the biggest of the fishes. Those will be your targets and with some developed practice in predicting the drops you will decimate the entire enemy destroyers population in a short time, tanks to this extremely lethal bomb.

Just be alert of enemy planes that will be eager to take you down, using the Armoured targets belt provides some of the boost in defence you need as it cripples engines and pierces through metal.