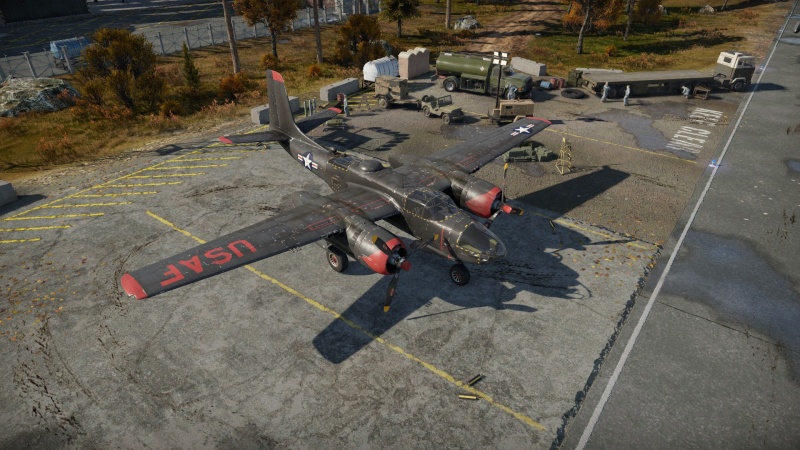 With speed, manoeuvrability and a large hitting power the A-26 should not be taken lightly. The plane has cruising speed of which all piston engine bombers dream of and is currently unmatched in the game. Reaching a maximum speed of 569 km/h the Invader is significantly faster than the comparable Tu-2. This speed allows the A-26 to strike targets deep in enemy territory and early on better than any other aircraft (excluding the jets). It also has a 4,000 lb payload with a variety of load-outs, making it very versatile in its role, allowing it to attack many different targets with great efficiency. To add to this, it has eight Browning M2 .50 cal machine guns to attack soft targets and the unfortunate fighter if you have the chance. Unlike the Mosquito the A-26 has defensive gunners and decent ones at that. With 2 x twin M2 MG remote turrets it allows for very accurate and deadly fire.

A modified version of the A-26 capable of carrying HVAR rockets, the A-26C-45DT, has since been added as a PlayStation 4 exclusive vehicle obtained by buying a pack.

The A-26C-45 can be outfitted with the following ordnance:

Use the A-26 to deliver fast tactic strikes. In the first minutes of the game plan your route and decide on your key targets, the basics you want to include are: