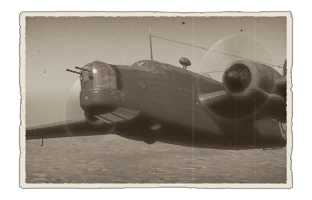 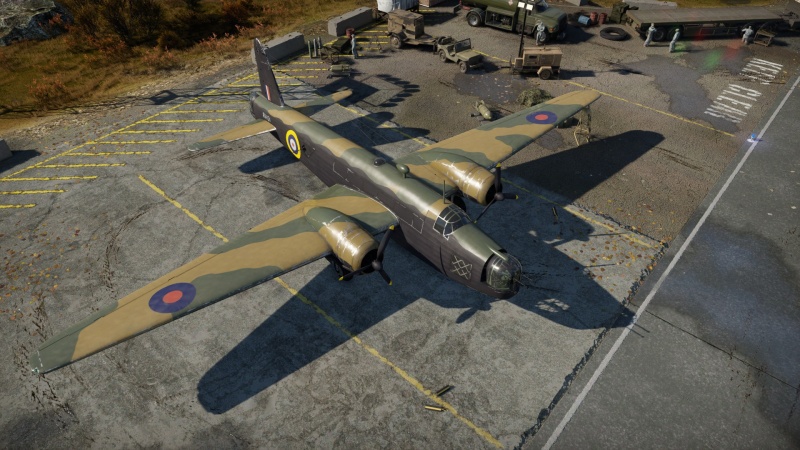 The Wellington Mk Ic /Late is a rank II British bomber with a battle rating of 2.7 (AB/RB) and 3.0 (SB). It has been in the game since the start of the Open Beta Test prior to Update 1.27.

The Wellington Mk Ic has no armour protection. The fuel tanks, oil coolers, and engines are all located in the wings. The crew are spread throughout the fuselage. Due to the lack of armour the crew, especially the gunners, are very vulnerable. This could lead to enemy fighters quickly disabling your gunners and leaving you defenseless.

The Wellington Mk Ic/L can be outfitted with the following ordnance:

The Wellington Mk Ic/L is defended by:

As with all bombers, crew training with at least "Expert Qualification" is important for profitable missions.

Both the UK Wellington and German Mk I's ("Jelly Welly") are identical, the only difference being the UK Mk.1c/Late model has its side turrets slightly behind the wings instead of above them.

In AB the winning tactic is to climb high and do base bombing with 500's "from orbit"; it helps to have escorts.

In RB you start in the air so you have the advantage to trade altitude for airspeed, bomb ground targets, and retreat before ground starting enemy fighters arrive, however, be close to friendlies so they can intercept chasers.

If you are attacking a Wellington, focus on its engines, they are relatively easy to set on fire. While you should not worry too much about the turrets, do not hang around either, as any connection could be dangerous.

The Mk Ic was the second most produced variant of the Wellington, at 2,685 airframes built between 1940 and 1942, and while virtually identical to the Mk.Ia, featured the removal of the ventral turret and replaced them with two machine gun positions firing from the sides. Another variation, a later modification of the Mk Ic by factory and field, included extra metal plating replacing windows for added protection. Initially, Vickers "K" machine guns were used, located in front of the wings, but the majority of Mk Ic aircraft carried a pair of Browning .303 machine guns located further back on the fuselage. While also featuring improved hydraulics and electrical systems, the aircraft was also the first version of the Wellington to feature Lorenz Blind Landing Equipment. Production of the Mk Ic proceeded into Autumn 1942, with an entrance into service in April 1940 as a night time bomber as daylight bombing had been ceased at that point.