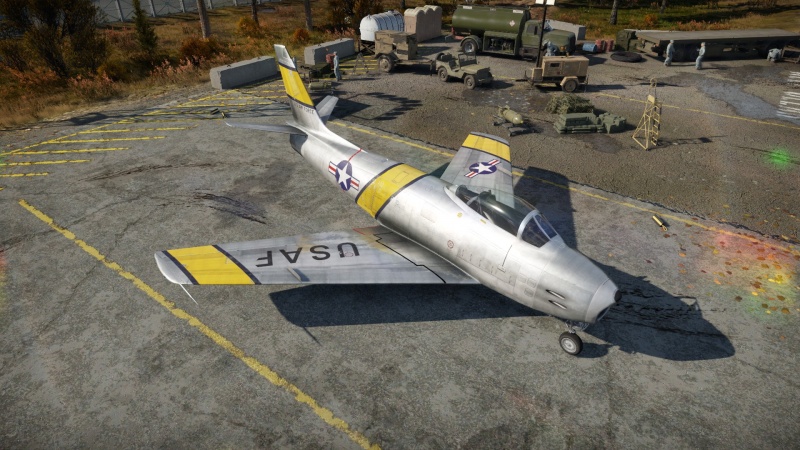 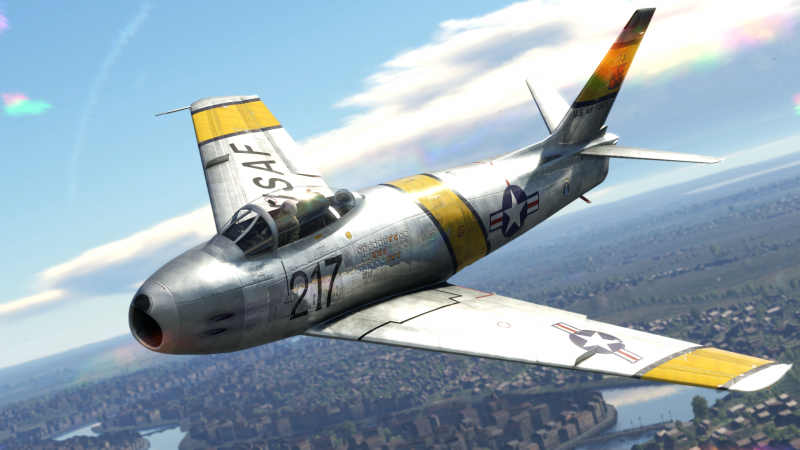 The F-86F-2 Sabre is a rank VI American jet fighter with a battle rating of 9.0 (AB/RB/SB). It was introduced in Update 1.35. This F-86F has one distinct difference from other Sabres: it replaces its six M3 Browning machine guns with four 20 mm T-160 revolver cannons. These cannons are extremely powerful, and pilots can utilize them along with the excellent aiming and dogfighting characteristics of the Sabre’s airframe to take this seemingly plain aircraft and dominate even in uptiers.

The plane's biggest strength and its specialty are the four 20 mm T-160 revolver cannons it carries. If you weren’t a fan of Sabres due to its Browning machine guns, know that these guns completely change the feel of the plane. That is because these guns are arguably the best aircraft cannon found at 9.0, boasting extremely high velocity, great damage and great fire rate. On top of that, the Sabre’s airframe makes aiming and leading these excellent guns very easy. None of the F-2 Sabre’s contemporaries can boast such a powerful and easy to utilize gun platform. What this means is that the F-2 Sabre is an excellent plane for punishing other players' mistakes, no matter how small, as just one very quick burst from these guns will devastate most aircraft.

However, there are two downsides about these cannons. The first is that each 20 mm cannon only has 115 rounds of ammo, and with its very fast rate of fire, this ammo capacity will be gone very quickly. The second is that they overheat very quickly; even with the “New 20 mm Cannons” modification, just two to three seconds of sustained firing will cause them to jam. These downsides mean that these cannons demand heavy trigger patience. If you're struggling with ammo conservation, focus on lining up your shots and firing a short burst of 10-15 rounds accurately at a target rather than hosing half your ammo load for a small chance of a critical hit. Something to note is that, to conserve ammo, one may choose to only fire two of the cannons at once (as one set of cannons are considered “machine guns” and the others cannons, they can be selected separately by using weapons selection mode). While the firepower is halved, it is still generally enough to cripple most aircraft with a short burst, so if you find yourself low on ammo and needing more firing time, only firing two cannons at once may be the trick.

Compared to the M3 Browning machine guns that it replaces, the 20 mm T-160 cannons similarly have high velocity and accuracy, and somewhat similar fire rates (the T-160’s is 25% faster than the M3’s). On the other hand, the rest of their characteristics are complete opposites; the T-160 completely gives up the large ammunition capacity and long overheating time of the M3 Browning for greatly increased explosive firepower.

Overall, these guns are excellent, and as long as you have good trigger discipline, they will be very kind to you.

In Air RB, speed is life, and doubly so for sabres. First thing that should be done after takeoff is gaining at least 1,000 km/h IAS in level flight and assessing the match. If in a downtier, staying on the deck is advisable as you will be one of the fastest planes in the battle. Focus on anyone who can match or exceed your speed and then move on to everyone else once there are no other threats. In an uptier, gain 1-2 km of altitude and play an assassin type role. Make it your mission to kill out of position players while using the threat of your cannon’s knock-out potential to dissuade enemies from attacking you and nearby teammates. Maintaining a decent amount of speed is very important because of the Sabre's comparatively poor handling at lower speed compared to MiGs, G.91s, and the like. While you can certainly effectively dogfight in the Sabre, in furballs you can easily get ganged up on and destroyed, so attempt to avoid doing so unless necessary.

F-2 pilots should always be on the offensive whenever possible to take advantage of the plane's huge impact on the battlefield. By continually maintaining a high energy state, eliminating out of position targets, the F-2 can dominate entire lobbies even in full uptiers. 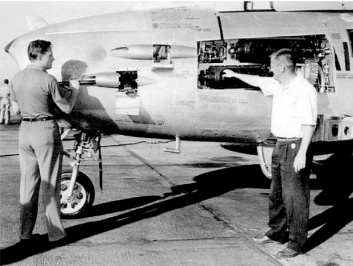 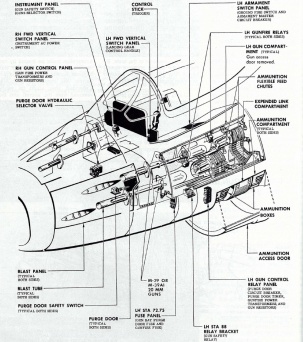