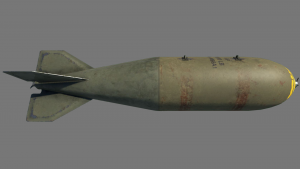 The AN-M65A1 Fin M129 1,000 lb bomb is an aerial bomb developed for the United States Army Air Corps and United States Navy in 1939, just prior to WWII. It is a General Purpose bomb that is employed against pretty much any target that may be encountered, and, due to its weight, has a powerful blast, and is very effective against vehicles, infrastructure and ships. It was designed to have a somewhat thin shell and pack the highest possible amount of explosives (in this case, Amatol), and was used chiefly by heavy bombers such as the B-17 Flying Fortress and the B-24 Liberator, although smaller aircraft such as the P-47 Thunderbolt, P-51 Mustang and F4U Corsair could use it (but didn't as often).

After the war this bomb was more widely used, being commonly fitted to ground attack aircraft and was favoured by the US Navy, which used them extensively in the Korean War in the F9F Panther and AD-4 Skyraider. As it was being used by smaller aircraft that carried it externally instead instead of packing them into an internal bomb bay, measures were taken to reduce their drag, and so the M129 Fin was developed and fitted to this weapon.

This bomb is also notable for being involved in the 1967 USS Forrestal fire, in which one of these bombs was detonated in the deck of the USS Forrestal by flaming jet fuel, killing dozens of sailors and wounding many more (the whole incident would have a death toll of 134 sailors killed and 161 wounded).

This bomb weighs 1,000 pounds, roughly 454 kg. This is a bomb of considerable size, and as such, is also quite powerful. Approximately half of this weight is comprised by the Amatol filling (240.4 kg or 530 lb), making this a very capable bomb, and can be very effective against pretty much any target.

Being a General Purpose bomb, this weapon relies on Blast and Splash damage effects to harm and destroy its targets.