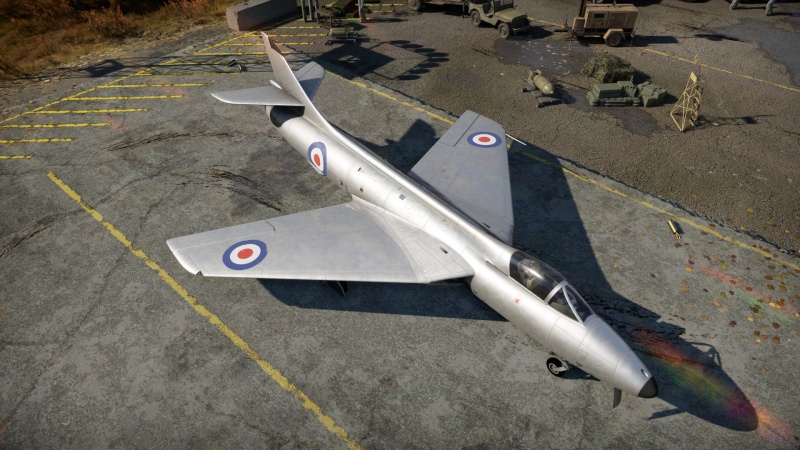 The Hawker Hunter is the iconic 1950s British swept-wing fighter. Produced from a requirement for a jet interceptor dating back to 1946 it fulfilled its role with outstanding success. Able to deliver a punishing blow with its four 30 mm ADEN cannons and manoeuvrability at high speed, it is a very capable jet. The F.1 follows the Vampire FB.1 and Venom FB.4 in the tree, providing an initial steep learning curve. Its calling card is sheer speed, with the Hunter able to go supersonic in dives once spaded.

The Hawker Hunter is a transonic jet fighter, powered by the Rolls-Royce Avon Mk.113 engine. It is able to reach 1,109 km/h at sea level and 1,013 km/h at 9,000 m, very similar to the F-86F series. It can reach 1.0 Mach in dive and be able to recover from it. Its thrust to weight ratio is 0.50 with fuel tanks and 0.57 with 5 minutes of fuel, making the level acceleration very good. The climb rate is also good, 55 m/s at sea level, but in order to achieve it the Hunter needs to keep 920 km/h TAS, it is better in comparison to other jets without an afterburner like a F-86F or MiG-17. The engine might start overheating after 10 minutes of flying at 100%, which can be mitigated by setting RPM to 7550 or lower.

Despite having low wing loading compared to other jets it is not particularly manoeuvrable and has a high stall speed, due to the low amount of lift generated by its wings. While its high speed turn rate is decent and the plane can pull up to ~12 G, once the plane decreases its speed to around 700 km/h it begins to struggle and it only gets worse the slower it flies. Outturning any Sabre or MiG-15 is not possible and the plane will have a hard time even against planes like the F11F-1. The elevator starts to lock up above 0.85 Mach, below that speed it should be able to pull at least 11G. Its roll rate is decent and just good enough to make flying it comfortable, ~120°/s at 900 km/h, ~105°/s at 600 km/h and ~50°/s at 300 km/h, making it better than the MiG-15bis or MiG-17, but worse than all American Sabres. The flaps can slightly improve the turning performance, however they can only be used below 600 km/h IAS, where it struggles to turn. The airbrake provides as much drag as in similar planes like the Sabre, but has one issue, it is located under the plane, so it cannot be deployed when the landing gear is extended. This can make landing quite tricky since its wheel brakes are also weak and landing speed is high: around 300 km/h IAS with flaps.

The Hunter is a very nice to fly plane in both Realistic and Simulator battles, aiming is easy since it is very stable. A slight pitch trimming might be required to stop its nose from dropping, up to 3%. Reaching the maximum angle of attack will not make it start spinning immediately, that can happen only after a few seconds pulling it all the way to yourself, but it also can be easily recovered from that state.

The Hunter is less manoeuvrable than the F-86 and MiG-15 while being the second fastest with a good thrust-to-weight ratio. However, the rate of climb is significantly worse than the other jets and so it requires some side climbing. Stay fast at all times and never drop beneath 850 TAS (~800 km/h in air).

The 30 mm ADEN cannon is an extremely powerful cannon. Being a revolver cannon, it fires extremely fast and has excellent ballistics. The Hunter F.1 has, thanks to mounting a pack of four ADEN 30 mm cannons, one of the highest one-second burst masses, near 21 kg/s. This weapon's characteristics mean that the 4 of them pose a serious threat for any aircraft that happens to be the target of them. The cannon, however, has the disadvantage of chewing very quickly through ammo thanks to its high rate of fire, so being wary of the ammo count is a necessity. The discrete tracer rounds may induce the player into error, causing the impression that only a light burst is being fired, however experience will quickly disprove anyone who thinks in this manner.

The armour-piercing rounds of the Hunter enable it to do some ground attack against light tanks, medium tanks, and pillboxes.

The Hunter F.1 is equipped with an AN/APG-30 rangefinding radar, located in the nose of the aircraft. It will automatically detect other planes within the scanning area and display the range to the closest target. It is linked with a gyro gunsight and can help with aiming at close range.