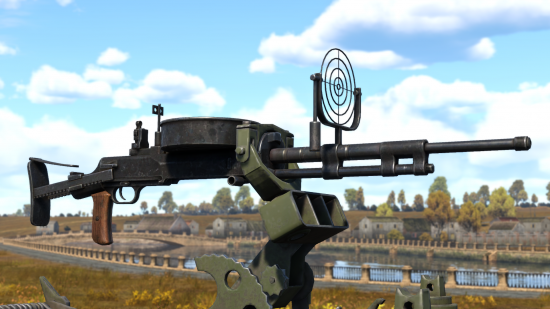 The 7.62 mm DT is a Soviet machine gun used on a variety of armoured fighting vehicles. A conversion of an infantry light machine gun for ground vehicle mounts, the DT provides a steady rate of fire to suppress or harass enemy vehicles and their crew with.

As the primary coaxial weapon for the majority of the Soviet Union's World War II designed/produced armoured fighting vehicles, the DT machine gun is a weapon that players will need to familiarize themselves with for a good part of the Soviet tech tree. Unlike most other nation which have belt-fed weapons, the DT is magazine-fed and so cannot carelessly fire away without worrying about the magazine being emptied. Though the reload time is short, it does leave the vehicle more vulnerable to targets that may otherwise be receiving a good hail of machine gun fire at the moment like aircraft or thin-skinned open-top vehicles. 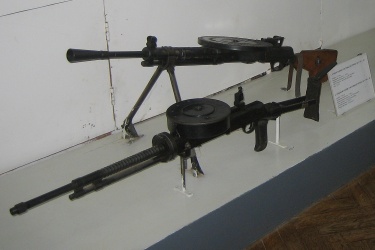 A DP (rear) and DT (front) machine gun on display.

The DP was also be used as vehicle mounts under the variations DA for aircraft mounts, and DT for tank mounts (alongside the modernised DTM). These variants were notable for their removed barrel shroud for a heavy barrel, different stock design (the DT would have a collapsible stock), and a redesigned 60-round magazine with a taller, three-layered ammunition arrangement that was smaller in width to for mounting within a constrained vehicle space.[2][5][6]

After World War II, the Soviet decide to replace the cumbersome pan-magazine on the DP with a belt-fed system. The DP machine gun was modified once again in 1946 with an add-on module that converts a DP to be able to take an ammunition belt from the SG-43/SGM machine gun.[7] This modification was adopted as the RP-46 (Rotnyj Pulemet (Company Machine Gun), 1946). The machine gun would remain in use in the Soviet military until supplemented by the universal PK machine gun.[2]

The DP and its variations sees wide-spread use in Soviet-aligned countries such as North Korea and China,[2][8] the latter of which license-produced the DPM machine gun as the Type 53.[9]