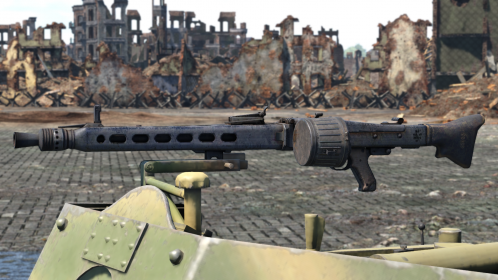 The MG42 is one of the main German rifle-calibre machine guns utilised in War Thunder alongside the MG 34 (7.92 mm)

The MG42 is a jack-of-all-trades of machine guns with no real weaknesses limiting its use for the larger part.

The MG42 has a very high rate of fire meaning that the often drum belt is emptied very quickly. Small bursts should be used against lighter armoured vehicles that can be penetrated single shots should be used until the damage is being inflicted to conserve ammunition.

The MG42 was significantly less expensive on the German industry at the time of production due to the parts being made out of stamped metal and employing a new roller locked action.

One uniqueness of this gun is the barrel changing mechanism. Unlike most machine gun barrels, when replacing the barrel, it was necessary to remove the barrel from the side of the heat shield, requiring more space necessary to work around the machine gun unlike most other barrels of the time. Due to this issue, MG 34 machine guns continued to be produced and were also installed in production Tiger and Panther tanks as series hull machine guns.