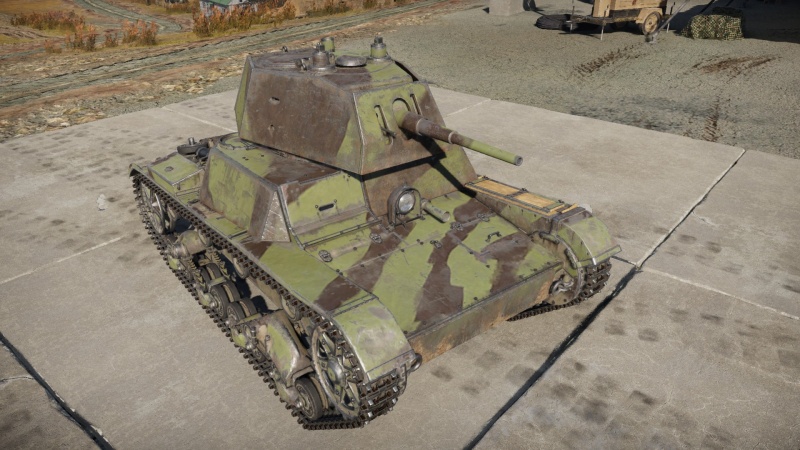 The T-26E is a premium gift rank I Soviet light tank with a battle rating of 1.3 (AB/RB/SB). It was introduced as a premium pack during the Closed Beta Test for Ground Forces before Update 1.41. It was removed from the store after the 2017 Victory Day sale but was reintroduced as a battle trophy vehicle in the Warbond shop in April 2019 until August 2019 and from the Battle Pass: Season I, 75th Anniversary of the Great Victory until the end of the Battle Pass: Season IV, "Fearless Voltigeur".

As an up-armoured version of the T-26, it stands a better chance deflecting enemy shells off its front armour when angled correctly.

The armour of the T-26E is greatly improved over the base model with its add-on 30 mm armour plates on the hull and turret on all sides. Despite being poorly angled, this armour, when not angling the hull, is very much immune to early cannons with low penetration (e.g. Ha-Go, H.39), and when angling the hull, is capable of deflecting the most lethal rounds at this BR: the 20 mm PzGr.40. This allows the T-26E to be more of a frontline "heavy" tank. However, the armour is still very weak against a tank destroyer, (e.g. LVT(A)(4) ZiS-2) so be very careful if one is present around you. Also the add-on armour only covers the upper plates, leaving the lower front plate unprotected. Transmission can get damaged a lot.

It will eventually take you where you want to be, provided that you choose your route well and avoid tricky manoeuvres, and be very patient.

The 45 mm 20-K is the typical Soviet rank I gun. Players should get used to it since it will be your main armament up until rank II. The APHEBC round has high penetration for this BR and a good amount of HE filler, meaning penetrating shells will do good damage, sometimes even knocking out enemies with a single shot. In longer ranges, shells begin to lose penetration and accuracy; it is not made for sniping. If you bring the T-26E to a higher BR battle, try to bring ~10-15 BR-240SP (armour-piercing shells without explosive filler) for heavier targets such as B1 ter, and M4A3 (105). Overall this gun is very forgiving to beginners, with its very fast reload speed and turret traverse.

One aspect of the T-26 series tank that is often ignored is that, its low top speed can limit new players from getting to the front line too quick. While experienced players will find the speed too painful, it might actually "protect" new players. Imagine if a new tanker chooses a BT-5 instead of a T-26 at the start of a match, and rushes for a capture point. What he/she will then encounter at the capture point will not be beneficial for their gaming experience: the brutal slaughter of experienced tankers driving equally fast and deadly tanks such as Sd.Kfz.234/1, Pz.II C (DAK), M22, etc. New players will die quickly like that. Whereas if they use a T-26, they will arrive at the frontline much later to avoid being destroyed in the first wave of attack, giving them enough time to analyse the battlefield and make decisions.

Apart from the low speed that somewhat protects new players, the T-26E also offers great firepower and nice protection, which can save you from badly aimed shots or be used in a hull down position effectively.. The 45 mm cannon can frontally penetrate and knock out most tanks at this beginner-friendly BR with single shot. Although lacking any stabiliser, the T-26 is still quite a stable gun platform. The add-on armour provides better protection against popular 20 mm autocannons, especially when the T-26 is angling the autocannons' APCR penetration will be greatly reduced.

In order to remedy this, Factory No. 174 in Leningrad designed a new variant for the T-26 utilizing applique armour on the hull and turret. This variant was dubbed the T-26E (E for ekranirovanny or "screened"), which added 30-40 mm of armour to the original armour plates via bolting and welding. All of the single-turreted T-26 models made during the Winter War period was given this modification and testings proved that the additional armour made the T-26 much more resilient against light anti-tank weapons. A total of 89 T-26Es were made during and after the Winter War, with 27 single-turret models made from the factory, 27 more as flamethrower models, and 15 single-turret models were made in workshops near the front-line. After the war, 20 more single-turret variants were made and delivered for tank units. Many more modified T-26s were made during the course of World War II.

During World War II, applique armour of varying thickness from 15–40 mm was added onto many different T-26s in large quantities ranging to hundreds in the front lines to fight back the German invasion. Such areas where these modifications took place in Leningrad, Odessa, Moscow, and Sevastopol in the period of 1941–1942 during battles and sieges taking place in or near these cities. However, compared to the modifications made during the Winter War, the World War II T-26Es were more crude and rough that the gun mask on the tank was unable to move, and the applique armour was only added on the front.