The 7.62 mm Browning MG4 is a South African production variant of the Browning M1919 machine gun. Though similar in performance and profile, the MG4 differs with a modification that converts the machine gun to fire from an open-bolt configuration. 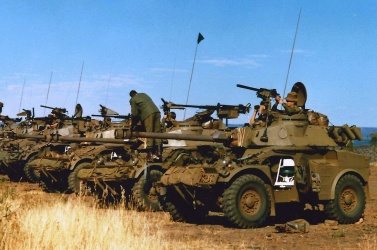 In South Africa, multiple variants of M1919 Browning machine guns were in service of the South African Defense Force (SADF) in various calibers such as .303, .30-06, and 7.62x51 mm NATO. As the infantry standardized on the 7.62 mm NATO cartridge with newer rifles and machine guns, the Browning machine gun was still a desirable weapon for vehicle and armoured mounts due to the design's short inboard length, heavy barrel for sustained firing, and ability to change barrels from the rear of the receiver. Many Brownings were converted to use 7.62 mm NATO round for continued use in the SADF, such as on the Eland armoured cars.[1]

However, by the mid-20th century, the Browning machine guns were becoming aging equipment. Part shortage was encountered when the surplus market for the Browning machine guns dried up. The weapon's approaching end-of-service life was also causing more malfunctions, and the closed-bolt design of the machine guns were causing "cook-offs", where the heat of the gun from sustained fire causes the next round to go off without the trigger being pulled. A decision was made not only to modify the weapon to prevent the "cook-off" malfunctions, but to also begin local production of the machine gun to continue the upkeep of the weapon in SADF service.[1] This assignment was given to Lyttleton Engineering Works (LEW) in 1976.[2] LEW's new Browning machine gun design was designated the MG4, though it was also known as the L3 in SADF designations.[1]

The biggest modification that LEW performed for the MG4 was converting it from the M1919's closed-bolt design into an open-bolt design, which kept the gun breech clear of any cartridges and allowed air to flow through and cool the barrel. Multiple other modifications were done to improve the weapon as well, including the addition of a safety lever on the right receiver side (though this feature was not unique to the MG4). LEW began by converting existing M1919A4 Browning into the MG4 from 1976 to 1980. To prepare the production of the MG4 in local factories, the M1919 was reverse-engineered and parts were built along M1919 specifications for the MG4, with production beginning by 1980.[1]

The MG4 only served as the machine gun armaments for armoured vehicles, though the machine gun is compatible with a tripod for dismounted use if needed. The MG4 comes in a flexible and coaxial mounting variants. While the flexible mounting comes with features not too different from a standard M1919A4 design (aside from LEW's modifications), the coaxial variant comes with no pistol grip nor sights and was fired via a 28 VDC trigger solenoid.[1]

The MG4 still serves today in the South African military as a machine gun armaments for armoured vehicles, some have been seen mounted in wind-shield ball mounts on Casspir MRAPs.[1] MG4 production switched over to Denel Ltd. in 1992 when the newly formed state-owned company took over ARMSCOR subsidiaries, which included LEW.[3] This was later amalgamated to Denel land Systems in 2006.[4]