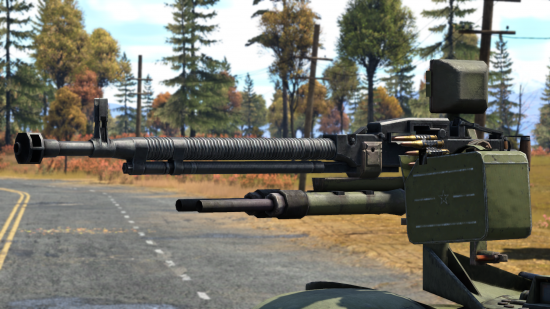 Tanks with the DShK as a secondary weapon only have access to one belt:

The GAZ-AAA (DShK) uses the DShK as its primary armament, and gains access to a set of different belt compositions:

M2HB- American rival with a slightly shorter cartridge, having similar rate of fire while M2HB has slightly higher penetration and generally larger pools of ammunition at its disposal.

The main purpose of the DShK was anti-aircraft in the first place, so it was seen in many forms ranging from a wheeled trolley up to mounting it onto tanks. Thanks to its large calibre at 12.7 mm, it can tear down light vehicles or strafing aircraft with relative ease and the rate of fire also helps this; it can also rip through enemies' tracks if necessary.

However, do keep in mind that it has a rather small ammo pool at only 50 rounds per belt/magazine, trigger-happy firing will make DShK run out of ammo very quickly. 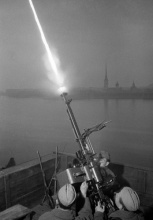 An anti-aircraft crew fire their DShK at enemy planes in Leningrad.

The Soviet Union's search for a suitable heavy machine gun for anti-armour and anti-aircraft purposes led to V.A. Degtyaryov developing the DK, or Degtyaryov Krupnokalibernyj (Degtyarov Large Calibre), in 1930 chambered in the new Soviet 12.7x108 mm cartridge. However, the initial design was hampered by its 30-round magazine capacity, restricting its capability to act as a machine gun. As such, the DK was discontinued by 1935. In 1937, another designer named Georgiy Shpagin developed a belt feed mechanism for the DK, which was fed from the left side only by a fixed, non-disintegrating metal belt for up to 50 rounds. By 1938, the weapon was submitted for firing trials and passed, with the weapon adopted in 1939 as the DShK mod. 1938. (DShK: Degtyarov – Shpagin Krupnokalibernyj, or "Degtyarov & Shpagin Large Calibre")[1][2]

The DShK served primarily as an emplaced heavy machine gun weapon, with special sights produced for anti-aircraft roles. The DShK was mounted on the Koleshnikov universal mount, which had a carriage allowing a wheeled configuration for transportation and firing at ground targets, or a tripod configuration using the carriage trails. In 1943, the DShK saw its first tank mount as the DShKT on top of the IS-2. The other prominent user of the DShK was the Soviet Navy, which used the DShK in a single (DShK, MTU-2), twin (DShKM-2, MSTU, DShKM-2B, 2-UK, 2M-1), or quadruple mount (DShKM-4) on torpedo boats, patrol boats, and destroyers.[1][3] 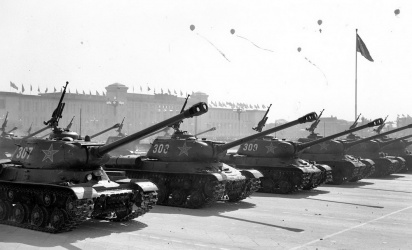 Production figures for the DShK was low prior to the Soviet's involvement of World War II. Pre-war figures have the DShK only begin delivering in 1940, making up a small part of the total 2,000 large calibre machine guns in the Soviet Union's overall inventory (with 830 single-barrel DShK mountings in the Soviet Navy). In the beginning of 1942, the Red Army's inventory had only 720 DShKs. However, as the weapon's value and production ramps up, the Red Army had 5,218 DShKs in 1943, and then 8,442 DShK machine guns in 1944. The Soviet Navy received 5,164 DShKs throughout the war.[1]

After World War II, the DShK saw another improvement by designers K.I. Sokolov and Aleksandr Norov. The improvement took elements from the RP-46, with a new feed mechanism that allowed the loading of belts from the left or right side of the machine gun. The weapon was also simplified with the implementation of stamped sheet steel parts, design of a new belt that disintegrated in 10-round increment, and other improvements that improved reliability and reduced failure rate of the weapon. This modernized design accepted in 1946 as the DShKM 1938/46.[1] The DShKM is distinctive from the DShK with its flatter belt-feed unit on the receiver.

The DShK and its variants have seen widespread use beyond the Soviet Union, either as aid to allies or sold through the arms market.[2] Multiple license-produced variants and copies are produced of the weapon, such as the Chinese Type 54 and the Iranian MGD 12.7.[4]