The DA (Дегтярёва авиационный, Degtyaryova Aviatsionny (Degtyaryov Aircraft); ДА) was a direct offshoot of the Degtyaryov machine gun (DP) designed to be mounted onto aircraft. Compared to the DP machine gun, the DA had a pistol grip, a shorter butt stock, a bag underneath to capture shell casings, and a different pan magazine.[1] The pan magazine differed from the original by holding 63 rounds instead of 47, and was made less wide but taller by having the ammunition arranged in ascending three layers.[2] 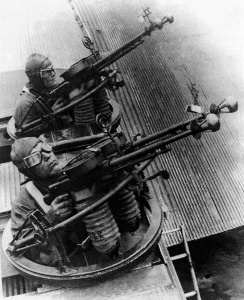 However, the DA and the DAS prototype were superseded by the ShKAS machine gun, which had a fire rate of 1,800 RPM despite the increased weight and technical compelxity.[3]