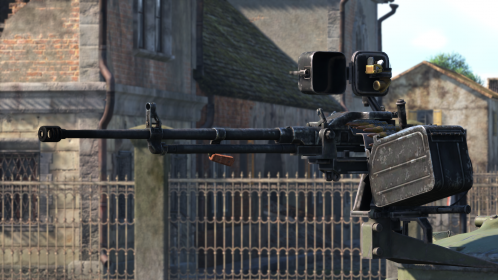 The QJC88A is a Chinese heavy machine gun used specifically on armoured fighting vehicles. It boasts an excellent rate of fire, and decent penetration, as it fires the 12.7 x 108 mm round seen on the Soviet DShK, NSVT, and 6P50. It is most commonly seen on main battle tanks at rank VI in the Chinese tree. Because it has a decent elevation angle, it can work as defense against a low-flying helicopter or aircraft in a pinch. Against ground targets, it won't penetrate as much as the M2HB, but can still pierce the armour of very light vehicles, such as anti-aircraft vehicles.

Since the QJC88A fires a much larger round than the typical 7.62 mm machine gun, can be elevated independent of the main gun, and boasts a high rate of fire, it can provide a surprisingly effective air defence weapon at close range. It can also work well against very lightly armoured AFVs from the side, notably anti-aircraft vehicles. It also works well to mark enemy targets, even if you can't penetrate, and clearing out bushes.

The W85 heavy machine gun was an attempt to design a new heavy machine gun for use by infantry troops. The Type 77 heavy machine gun, then the current infantry heavy machine gun, had been designed to be lightweight, but did not perform as well as expected. This led to the W85, but the Type 85, an improved version of the Type 77, was selected instead. However, years after its rejection, the W85 was readopted for use on a pintle mount on armoured fighting vehicles, and renamed the QJC88. It proved to be much more successful, and today it is used on many of the People's Liberation Army's vehicles, such as the ZTZ96 and ZTZ99 series of main battle tanks, as well as a number of other main battle tanks and AFVs. [1]