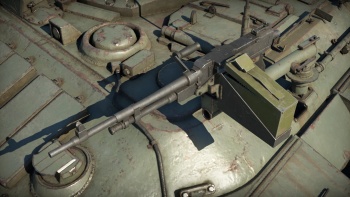 The FN MAG 60-40 is a Belgian 7.62 mm General Purpose Machine Gun. At present the FN MAG is only found on a couple of high rank vehicles, however a number of its derivatives (L8A1, L8A2, L37A1, L37A2, M240) appear on vehicles in-game usually performing the same or similar to it. Being only a 7.62 mm machine gun it is largely ineffective against all but the most weakly armoured, or open cabin, vehicles.

Like most of its derivatives, the FN MAG 60-40 can only be equipped with one ammo belt consisting of two Armour-piercing (AP) bullets, followed by one Tracer (T) bullet. Neither bullet has much penetration (maximum of 10 mm), however the AP bullets perform much better than the tracer bullet.

Due to the very low penetration this weapon is largely ineffective against enemy armour (although you may be able to penetrate some vehicles with extremely thin armour). The gun is primarily useful for incapacitating exposed crew members in open topped vehicles (although there are few such vehicles at the battle ratings this gun is found at). The gun can also be used for ranging on some vehicles, as well as marking enemy vehicles and obscuring the view of enemy players (shooting at their gun sight). You can use the gun against aircraft however it does minimal damage, and being co-axially mounted on most tanks can often not be brought / kept on target against aircraft. Clearing trees and bushes is another use.

The FN MAG entered service with the Belgian and British (under the designation L7) armed forces in 1958. Despite facing competition from the German MG 3 and American M60 the FN MAG (and variants of it) rapidly became widely adopted by many western armies. Eventually, after the failure of the M73 machine gun, America also adopted the FN MAG under the designation M240.

The FN MAG 60-40 is a variant of the FN-MAG designed for use on armoured vehicles. It has the stock and bipod removed, among other changes.