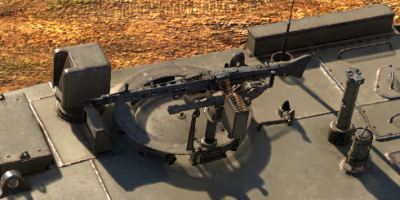 The German MG42 machine gun's characteristics of a high rate of fire, quick-change barrel system, roller-locked mechanism, and cheap stamped construction made it an attractive weapon for analysis in the post World War II environment.[1] The large surplus of weapons from the defeated Nazi Germany's stockpiles left many weapons available for the taking, which saw the MG42 and MG34 see use in far reaches of the globe.[2] When time came to re-arm in the Cold War period, German Bundeswehr requested the MG42 to take the stand once more as the German's universal machine gun. However, due to the destroyed documentation to produce the weapon, Rheinmetall reverse-engineered existing MG42s and, with modifications to use the standardized 7.62x51 mm NATO rounds, issued the weapon as MG1 in 1959. A modification of the MG1A2 variant with heavier bolt for a lower firing rate and ability to feed from the United States' M13 belt link led to the now prominent MG3 machine gun, which began to see use in 1963.[3] Rheinmetall's machine guns would see use in many countries across the world eager for their hand on a modern universal machine gun. 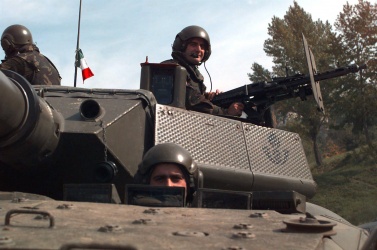 A Centauro crew with a pintle-mounted MG42/59.

Italy, during the post-war period, were also interested in a universal machine gun. This led to the Italians having Beretta license-produce the MG3 as the MG42/59 machine gun. The Italians, keeping with the weapon's nature as a universal machine gun, used the MG42/59 in an infantry, armoured, aircraft, and naval role for its service. Although recently the Italian army had made considerations to change over to the Belgium FN Minimi as their next squad automatic weapon, the Italian company Stabilimento Militare Armi Leggere Terni (SMALT) had offered a kit to convert existing MG42/59 machine guns to chamber the 5.56x45 mm NATO round for the role.[4]