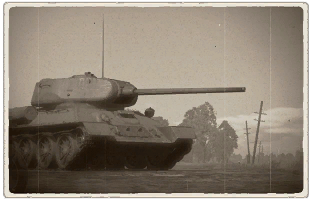 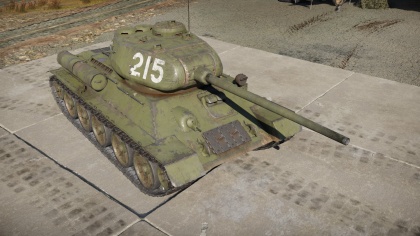 The T-34-85's best playstyle is that of a flanker. Due to its high mobility, fast turret traverse, and a capable cannon with excellent post-penetration damage, the T-34-85 fills this role perfectly. Since the turret is so tall, it makes combat behind low obstacles difficult, as the turret segment above the main gun is visible. The T-34-85's other playstyle can be as a support tank, by keeping up with more protected vehicles like the IS-2 and supplement firepower while their heavy armament reloads.

The T-34-85 would not make a very suitable short-range brawler though even with the 85 mm gun as the gun has a rather tedious reload for the specific playstyle and the T-34's armour is very poor at its BR. With that, the T-34-85 would tend to be able to fire one shot at a close enemy before it gets taken out by other enemies nearby. However, it is understandable that the situation is unavoidable, so it is recommended to stay steady by firing one shot at an unsuspecting enemy at close range before retreating to reload, evading enemy shots.

In RB, play this tank offensively yet carefully. Use your speed and keep up with your teammates, or alternatively play it like a light tank and go on long flanks. If one decides to use the T-34 as a main battle tank, it's advisable to hide the hull as well as possible which has the weakest armour. Unfortunately, most heavy tanks like the Tiger II are nearly invulnerable from the front, but many mediums and even Cold War MBT's can still be destroyed. At this rank bracket, however, its speed, turret location, and poor armour push it towards a flanking role, away from the 1940-43 main battle comfort zone. The gun is still very potent, and the ammunition often knocks out nearly the entire crew, but the increases in armour of enemy vehicles necessitate learning their weakspots. The gun is generally accurate and most shells retain their velocity even into far ranges -- at 1000 meters a Tiger I can be destroyed with a frontal hit.