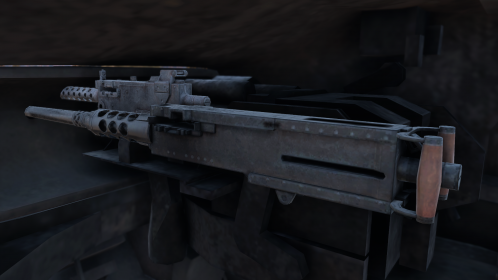 The L21A1 inside of the Vickers Mk.3 turret

The L21A1 is the post-war British designation for the American Browning M2 .50 cal (12.7 mm) machine gun, when used as a ranging gun on the Chieftain series of tanks. In-game the L21A1 is found as a co-axial ranging gun on the Vickers MBT, Chieftain Mk 3 and Chieftain Mk 5. Despite being a variant of the Browning M2 it performs significantly differently to the normal version in-game. The rate of fire almost halves, and most notably penetration is lower than that of the tank's L37A1 (7.62 mm) co-axial machine gun.

The L21A1 is only found as a ranging gun on the Vickers MBTs and Chieftain series of tanks, it is not found on the Chieftain Mk 10, as this version of the tank did away with the ranging machine gun. The L21A1 is found on:

The L21A1 only has access to one ammunition belt consisting entirely of Immediate-Action Incendiary (IAI) bullets. As these bullets are designed to be visible on impact rather than to penetrate armour they have poor ballistic performance, with a maximum penetration of 7 mm.

The L21A1 is the post-war British designation for the American Browning M2 .50 cal (12.7 mm) machine gun, when used as a ranging gun on the Chieftain series of tanks. The Browning M2 (also called the "M2 Machine Gun" or "Browning .50 Caliber Machine Gun") is a heavy machine gun designed by John Browning toward the end of World War I. The gun was similar to the earlier .30 cal M1919 machine gun but used the much more powerful .50 BMG cartridge. The M2 entered service in 1933 and saw wide-spread use by the Allies in WW2 as a heavy infantry machine gun, as well as being mounted on aircraft, ships and land vehicles (including extensive use on tanks and armoured cars). The weapon remains in service with a large number of countries (including the US and UK) to this day.

The British designation L21A1 was given to weapons used as a ranging gun on the Chieftain series of tanks. The L21A1 fired tracer rounds with an explosive tip allowing the gunner to track the rounds in the air (tracer was visible up to 2,400 m) and see a visible "splash" where the round impacted. Starting in the 1970s the ranging gun was phased out on newer variants of the Chieftain, in favour of laser rangefinders with a 10 km (6.2 mi) range, which was linked to the Fire Control System (FCS), allowing for quicker and more accurate engagement at longer ranges.

!-- Excellent additions to the article would be video guides, screenshots from the game, and photos. -->