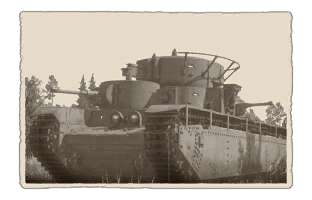 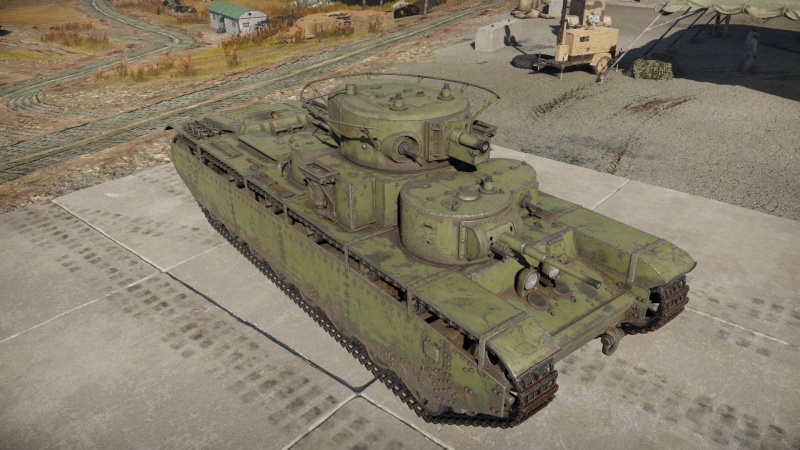 The T-35 has the distinction in-game as the vehicle with the most crew members (10 total). While the armour may not provide great protection against enemies even at Rank I, the large crew count makes up in part for the tank's survivability in combat. The T-35 is large. It has five turrets on top, but only three should be taken into consideration: the one in the middle, the one front right from the middle, and the one bottom left from middle, all due to their armaments being able to destroy tanks. However, don't be deceived by its size - the T-35's armour is barely more than 30 mm thick. Even with a standard Rank I gun, you may be able to penetrate its armour. 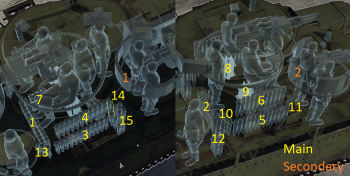 The T-35 sports 2 turrets equipped with 45 mm 20-K cannons in addition to the main turret equipped with the 76 mm howitzer. Despite the huge ammo reserve for the secondary turrets, the total ammo is split between the two turrets. This means that if one 45 mm cannon fires more than the other, it will run out and be unable to fire until resupplied. 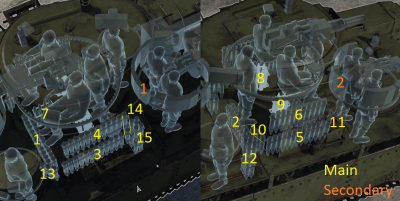 The T-35 is the largest tank among the Rank I vehicles. With a multi-turreted platform of two 45 mm cannons and one 76.2 mm cannon, the tank can combat enemies at an almost 360° angle. However, the armour is quite thin for a vehicle of its size so one should not play this vehicle like a typical heavy tank later down the rank. The speed is decent for a vehicle of its size, however, so it is possible to catch the enemies off guard by attacking from an area they least expect. The T-35 is nothing short of a behemoth, being able to take more penetrating hits than any tank at 1.3 with his large crew. Although possessing a relatively heavy armament, the lack of armour for its size and speed really limits its playstyle.

Stay with your team

Staying with your team ensures it isn't as easy for enemy tanks to take you out, this is most easily achieved if playing with friends who you have direct communication to. However, do not overextend, as if your teammates die you're a sitting duck, especially if you were daring enough to be in the middle of the battlefield.

Probably the most obvious way to play, taking cover and avoiding large and open terrain means you have the best chance of survival. This tactic may not be viable most of the time, it all depends on which maps you play.

The T-35 concept began from the OKMO design bureau of the Bolshevik Factory in 1930 when work began on a heavy tank. Two teams were made for two competing designs, one was headed by German engineer Grotte and the other was headed by N. Tsiets. Grotte worked on a 100-ton four-turreted TG-5 tank, armed with a 107 mm naval gun, using pneumatic servo-controls and suspension, but this was cancelled. N. Tsiets worked on a design that may be inspired by the British tank design Vickers A1E1 Independent, which is a multi-turret tank using one main turret with a gun and a smaller one's housing machine guns. This tank may also be the inspiration for the Soviet T-28 medium tank.

The T-35 is the only five-turreted tank to ever enter production. The main turret in the centre and mounted high is equipped with a 76 mm KT-28 cannon, two secondary turrets mounted front right and back left had a 45 mm 20-K gun, and two more secondary turrets on the front left and back right had a 7.62 mm machine gun. Despite being a rather large tank, the interior was quite constricted for its crew. The crew of 11-12 men were crammed together and this directly affected their combat efficiency. The crew layout was a compartment for the driver, each machine gun turret had one man, two men in the turret with 45 mm guns, and three men in the main turret. It was typical for a couple of crewmen to serve outside the tank. A senior driver was responsible for the transmission and running gear. While a mechanic overlooked and took care of the engine. Construction of the T-35s armour was a mix of welds and rivets. The tank was powered by a 12-Cylinder Mikulin M-17M engine generating nearly 500 hp and was considered underpowered. The design had many reliability issues and even flaws, such as the main turret being able to render escape hatches on the smaller turrets unable to be opened due to its gun mount.

The T-35 was issued to the 5th Separate Heavy Tank Brigade in Moscow and was involved in parades through the Red Square from 1935 until 1940. The T-35 was there to impress spectators as well as foreign observers rather than as a fighting piece. In June 1940, the T-35 was subjected to either be withdrawn from front-line duties, be converted into self-propelled artillery, or be sent to military academies for future studies. It was decided to keep them for combat purposes and the T-35s were issued to the 67th and 68th Tank Regiments in the 34th Tank Division in the 8th Mechanized Corps in the Kiev Special Military District. The T-35 then saw action against the German forces when Operation Barbarossa was commenced. Though the tanks actual combat history is not very well documented, the tank regiments they were assigned to report a loss of 90% of the vehicles, more to mechanical failures than to enemy combat. These broken-down tanks were subsequently destroyed by their crews to avoid capture. The last reported use of these tanks was during the Battle of Moscow, where two T-35s were deployed and its performance went unrecorded. One such vehicle was captured by the Germans and sent to the Kummersdorf military proving grounds for evaluations. This captured T-35 may or may not be the same one the German used during the Battle of Berlin in April 1945.

The T-35 was once mistaken for taking part in the Winter War against Finland, this is due to the deployment of the SMK, T-100s, and KV-1s prototypes into the battle as combat testing. The SMK was disabled by the Finnish and was documented in photographs, which the German intelligence designated as the T-35C, despite being not related to the T-35 tank.

Today, a single T-35 is left not only in an intact state but still in running condition. This tank is held in the Kubinka Tank Museum in Moscow and only survived because it was used as a training facility rather than combat use. Kubinka also holds the second prototype of the aforementioned SU-14 self-propelled artillery gun.