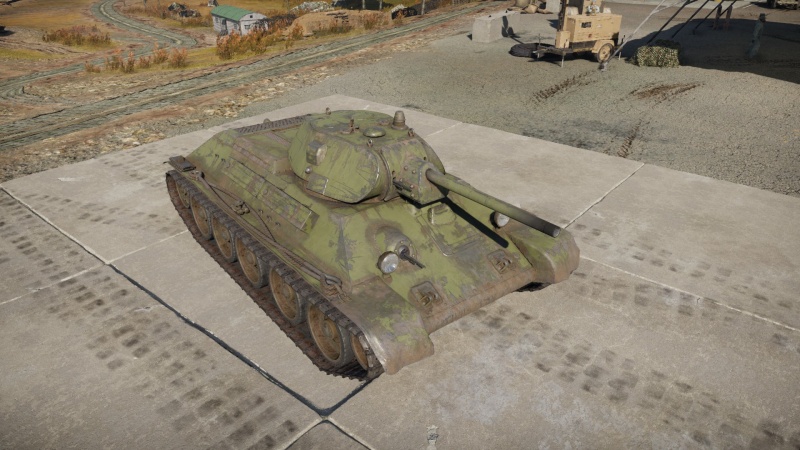 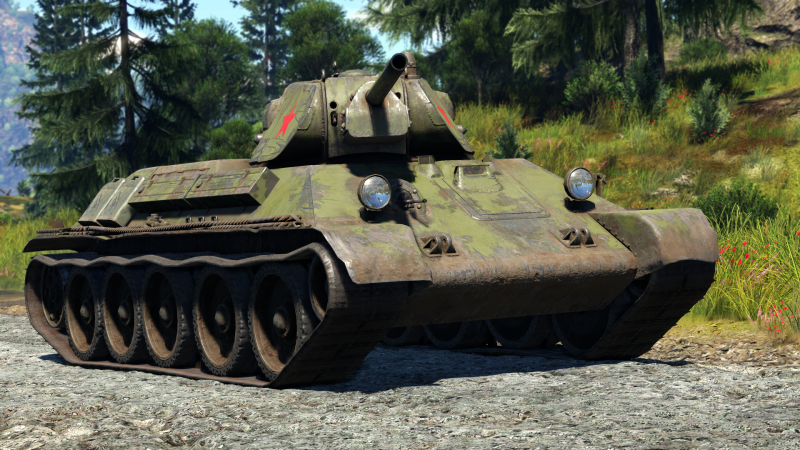 An improvement over the T-34 (1940) with the older 76 mm L-11 cannon replaced with the 76 mm F-34 cannon. The F-34 presents overall better penetration values with all armour-piercing rounds. Armour and mobility on the T-34 (1941) are otherwise unchanged.

The tank's mobility is impressive due to the very generous hp/ton ratio the engine provides to the medium tank. The wide track also helps with traction across softer ground, so the T-34 (1941) is less likely to be bogged down in more wet terrain like in the map Jungle.

Exploit the T-34 (1941)'s mobility with its highly-angled hull armour to wreck havoc in the enemy lines by breaking through and marauding their controlled zones.

The T-34 (1941)'s 76 mm F-34 is overall better gun compared to the preceding L-11 gun, with much better armour-piercing characteristics, shell muzzle velocity, and faster reload time. The F-34 gun essentially makes the 76 mm-armed T-34 a menace in lower rank battles by being able to penetrate even heavy tanks with a well-placed hit.

Of the three armour-piercing shells available, the two most recommended shells to bring to destroy enemy tanks is the APHEBC BR-350B (MD-8 fuze) and the APBC BR-350SP shells. Though the BR-350A (MD-5 fuze) has more explosive filler for post-penetration damage, the lower penetration values mean that this potential is useless if the shell can't penetrate the enemy tank's armour, hence the BR-350B is recommended for a balance in armour-piercing potential and post-penetration damage. The APBC presents the best penetration values, but does not have any explosive filler inside, so it is best to keep them in reserve in case the T-34 (1941) encounters one of the few troublesome vehicles it struggles to penetrate. 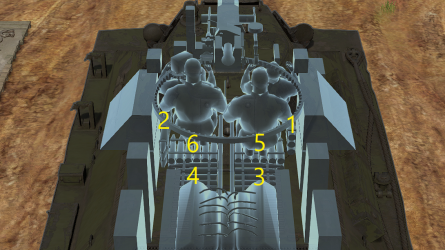 A standard coaxial machine gun. The only major difference the DT has compared to other nation's machine gun armament is the magazine-fed system. While this means the firing time between reloading is shorter, reload time is also shorter to get the weapon back into action.

T-34 (1941) is one of the most well rounded medium battle tanks at its rank among it with the German Pz.IV F2 and United States M4 Sherman tanks. The sloped armour, great acceleration with good speed and 76.2 mm cannon make it a force to be reckoned with especially against inexperienced players, meanwhile when facing experienced players, however, it can become scrap metal pretty fast. Compared to the 1940 version, the 1941 gets a better 76.2 mm cannon which greatly improves the penetration power but still keeps the 1940 model turret. At distance, the sloped armour is efficient at blocking shells from enemy tanks with relatively short and small-calibre cannons even some long barrel and high calibre guns can also have trouble penetrating on the sloped armour if used well. Even with its sloped armour advantages, a T-34 is a relatively easy tank to knock out specifically with a well-placed shot. With the crew operating in a compact space around the turret, which is located in the centre of the tank where it is a very limited space to operate in makes it an easy tank to knock out the crew with a single blow from a shell with a good amount of high explosive filling. Also, be mindful of the T-34's turret. It is a weak spot and can be easily penetrated by an enemy shell and will with ease knock out the tank and its crew.

Only minor modifications were implemented in the T-34 Model 1941. The main goal was to get rid of teething problems and improve manufacturability. It still had a cramped 2-man turret but it was better armoured: the vehicle gained 2 tons overall. It received a better radio equipment for commander tanks but the turret lost its periscope. It kept the initial engine but received better injection, air filter and a better gear box. A major change was the better 76 mm F-34 gun. The gun featuring a better performance was installed on new T-34 Model 1941 in place of the 76 mm L-11 at the initiative of Vasiliy Grabin. Those new tanks were then issued to platoon commanders who in return praised the new gun for its performance. This led the Soviet bureaucratic institutions to approve the gun for production and integration on The T-34. Production started early 1941 in Kharkov. While only 400 T-34 Model 1940 were produced. a total of 3,111 T-34 Model 1941 were produced by Soviet factories before switching to the Model 1942.

The T-34 (1941) was the first T-34 to massively see combat. It was deployed on the Eastern front to counter the advance of German armour and was deemed a performant platform by Soviet troops. The lack of effectiveness of German 50 mm guns against the sloped armour of T-34s led to the development of new 75 and 88 mm guns to equip German tanks.