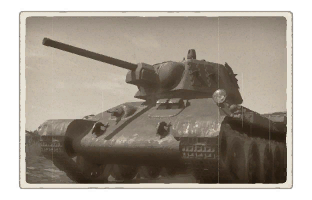 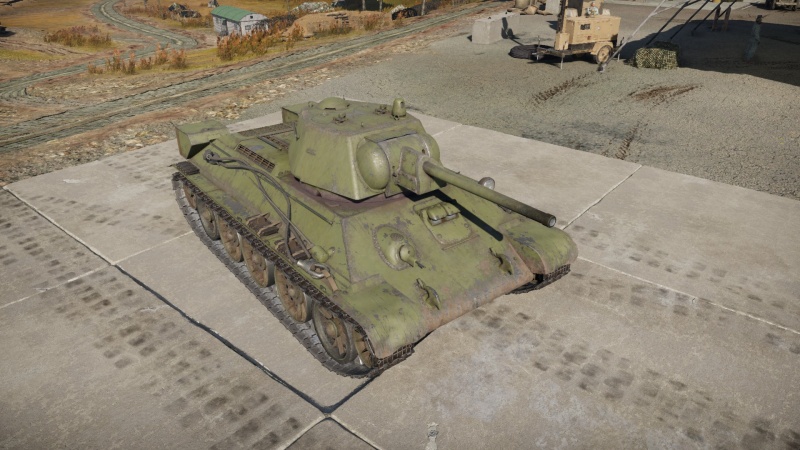 It should be noted that due to the relatively thin plate thickness used (40–45 mm), the T-34's hull is vulnerable can be vulnerable to overmatching from 75 mm and larger guns.

The new hexagonal turret features thicker armour than on the 1941 model. However, there are a few caveats:

Overall, the turret armour is not a significant improvement over the earlier models and is in some ways weaker.

The bulk of the T-34's main gun ammunition is carried low in the hull, making it relatively hard to detonate the ammunition of a T-34, especially if it is carrying a reduced ammunition load. However, the T-34's hull sides are spanned by relatively large fuel tanks; thus, side penetrations can cause the diesel fuel to catch fire.

The crew are seated in a quite compact manner inside the tank, and successful penetrations are likely to disable multiple crew members at once. 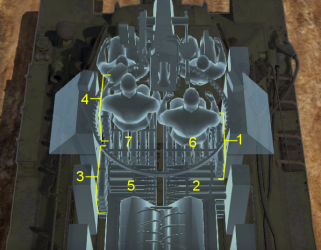 Like the previous T-34 models, the 1943 model excels at close to medium range fighting, utilizing its outstanding mobility for a medium tank to rapidly close the distance and relocate to attack from unexpected directions. The sloped hull armour has a good chance of ricocheting hastily aimed shots and helps increase the odds of the T-34 surviving when moving in to engage. The lethal BR-350B APHEBC round complements this playstyle, having about enough penetration to deal with the flanks of most enemies likely to be encountered; a single penetrating hit is usually fatal for the target. In close combat, the fast turret traverses and quick reload allow the T-34 to respond quickly towards changing situations, usually helping to ensure it will be the first to get its gun on the target.

Conversely, the T-34 fares poorly in long-range combat; both the BR-350B APHEBC and BR-354P APCR rounds have poor penetration at long ranges, and the BP-353A HEAT round is quite underwhelming as well.

Light tank/SPAA: lower tier light tanks/SPAA (e.g. M5A1) will find the waves of T-34 hard to counter. If your penetration is above ~65 mm, target the turret ring as it is only 53 mm. Avoid shooting at the sloped hull armour at all sides as it is very likely to bounce small calibre shells. If the T-34 does not know your presence and is exposing its side to you, target the vertical hull side between the mudguard and the roadwheels, it is only 45 mm and a shot there can disable both turret crew and drivers. These are the only weak spots if your penetration is low, even the rear of a T-34 is heavily sloped.

Medium tank: perhaps the most common medium tanks used around this BR is the M4 series with short 75 mm cannons. When the T-34 is not angling, you can punch straight through the upper front plate and knock it out with a single shot, but do avoid the MG port and driver's hatch as they very much like to absorb shells. The turret ring is also a weak spot. The turret/gun mantlet, however, will be quite tricky to penetrate especially if the T-34 is at a distance or hull down. On the spherical gun mantlet there are small sections where the curve becomes almost vertical, making them a weak spot, but your shell is likely to impact the huge bulge joining the mantlet and the gun barrel before hitting where you aim at. That is the housing for the hydraulic recoil cylinders, if you target that specifically you can disable its gun breech. There are also small corners of the turret around the gun mantlet, but they are spread out and tiny, therefore harder to hit. For an angling T-34, if their angle is a bit too much and too much side profile is exposed, fire at the lower, vertical side between the roadwheels and the upper mudguard.

Heavy tank/tank destroyer: it is fairly easy to destroy a T-34 in a well-protected tank or a tank hunter. Heavy tanks such as ▀Pz.Kpfw. Churchill and ▀KV-IB will not have a hard time as they are tough enough to easily take some hits from the short 76 mm F-34 of the T-34. Still, target the hull where the T-34 is not angling, or the turret ring. Tank destroyers like the M10 will find it even easier to pierce through the armour of a T-34, but play carefully since tank destroyers are not well armoured.

Despite its position in the Chinese tech tree, it has to be noted that the T-34 (1943) is not, in fact, a Chinese vehicle. All currently available sources indicate that the PLA never operated the F-34 armed version of the T-34, and the best available documents, compiled by Dr. Martin Andrew, indicate that 1837 T-34s were delivered by the Soviets to the PLA between 1950 and 1954, all of which were the T-34-85 variant.

It is thought that the PLA indeed obtained a small number of F-34 armed T-34 tanks for training purposes, likely left by the Soviets when they withdrew from China in 1955. Some are still kept as exhibits in the Harbin Tank Academy.

However, the T-34 (1943) did see service in North Korea, with deliveries starting in 1949. Following the proclamation of the Democratic People's Republic of Korea on September 9th 1948, North Korea's first armoured unit, the 105th Armored Battalion was established in October of 1948, increasing to regimental strength in May of 1949 before being rebaptised as the 105th Armored Brigade prior to the outbreak of the Korean War in 1950. Due to the lack of official North Korean sources on the subject, it is unclear how many T-34 (1943) saw service with the DPRK; evidence does exist that a number of them were committed to the original June 1950 assault on South Korea, with a number of knocked-out short-barrelled T-34s being photographed on the battlefield.

The nature of combat in Korea meant that tank losses were high for the DPRK, and out of 120 tanks reported on strength in June of 1950, nearly all had been lost by December that year. Replacements were delivered by the Soviet Union, all of these later deliveries covering the T-34-85 variant.

Following the end of the Korean War, a reconstruction program was started to bring the DPRK's army back to strength, with additional deliveries of T-34s arriving from the Soviet Union. Again the lack of reliable North Korean sources makes it impossible to work out what was delivered, but sources indicate that despite the delivery of T-34-85s, which remained the mainstay of the North Korean Army until it first received T-54/55s and Type 59 tanks in 1967, a number of older T-34-76s remained in service, either being rebuilds of recovered vehicles or, more likely, new deliveries from their Soviet allies. Most tellingly, a widely circulated still from a late 1960s North Korean propaganda film shows military manoeuvres involving at least two T-34-76s, both showing signs of modernisation such as T-34-85-type saddle fuel tanks and starfish roadwheels (first introduced 1969). As such, it can be surmised that at least some T-34 (1943)s remained in North Korean service into the 1970s in some sort of reserve or training capacity.