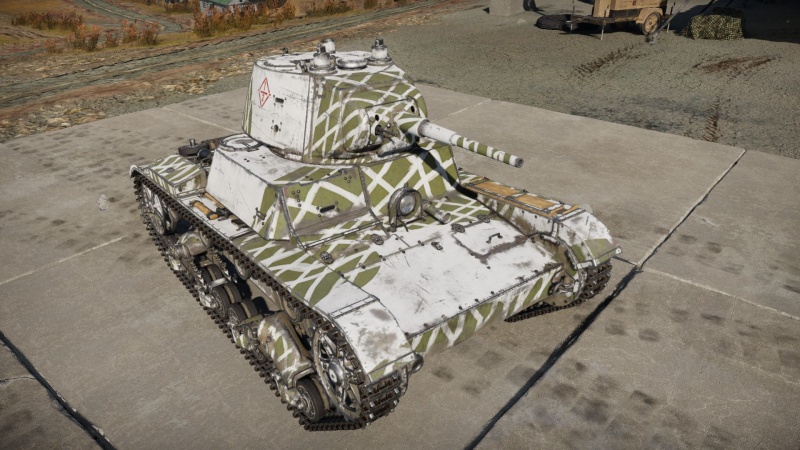 The T-26 (1st Gv.T.Br) is a premium version of the T-26, and is identical except in its special winter camo, of a T-26 of the 1st Guards Tank Brigade during the Battle of Moscow. 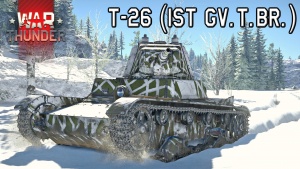 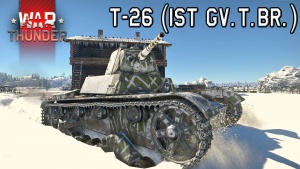 The 45 mm 20-K is the typical Soviet rank I gun. Players should get used to it since it will be your main armament up until rank II. The APHEBC round has a good amount of HE filler, meaning penetrating shells will do good damage, sometimes even knocking out enemies with a single shot. In longer ranges, shells begin to lose penetration and accuracy; it is not made for sniping. Try to bring ~10-15 BR-240SP (pure AP shells) for heavier targets. This gun is very forgiving to beginners, with its very fast reload speed and turret traverse. 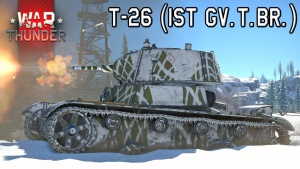 The T-26 is definitely best suited to a more support role, flanking the battlefield and finding a good position to support your teammates from, the 45 mm cannon has very good characteristics with its rounds (APHEBC, AP) being able to deal fair damage to enemy vehicles from short and long range and the fast reload allowing for quick adjustment of aim between shots, this allows the T-26 to be a highly effective flanking vehicle if a good camping spot is found, however, the limited gun depression (-6°) will affect which positions are usable, keeping long range is certainly an effective way to avoid taking damage. The T-26 is also usable at closer ranges for brawling with enemy vehicles, but it should be kept in mind that the thin armour on the T-26 (≤15 mm) will leave the vital modules of your vehicle such as your crew, gun & powerplant (engine & transmission) at risk of taking damage, the mobility of the T-26 is also lesser than many of its counterparts which could potentially put it at risk in a brawling scenario, on the other hand the T-26's good reload (3.77 - 2.9s) will usually give it an upper hand if you can survive the first shots against an enemy vehicle.

Due to the top speed of the T-26 being less than many other vehicles at its BR (30 km/h), it will usually arrive to the battlefield after the fighting has already begun, this has the advantage of arriving after your team has already identified many targets, and also meaning that you will not be in the front line of attack, this will usually allow for you to last a bit longer than players who rushed the centre of the battlefield, alternatively it is also less likely that you will reach capture points before they are captured by your faster teammates although there are cases where you can help capture a contested point.

The lack of armour is really something to be kept in mind, even some machine guns (8 mm, 12.7 mm) will be able to go through you thickest pieces of armour (15 mm), due to this you want to be trying your best to avoid enemy vehicles getting the first shot, driving in cover is advisable to avoid being spotted and if you spot an enemy vehicle it would be best to engage and destroy them as soon as possible to avoid them becoming a threat, due to the lack of effective armour, aircraft can also be a risk, again, staying in cover will make it more difficult for enemy vehicles to spot and engage your T-26.

In terms of the T-26's gun there are 2 round options, the APHEBC round has 70 mm best effective penetration as well as an explosive filler, this will allow for this round to penetrate most armour at this BR and also have good post-penetration damage if the fuse is set off. Second round type is an AP round, this has 73 mm best effective penetration but lacks any explosive filler, this makes its post-penetration damage less effective than the APHEBC round. Moreinfo on both these rounds can be found in the Ammunition section above.

It is also worth keeping in mind that the reverse speed is only -3 km/h, so you will have to be careful when driving out into potential enemy fire.

Main article: History of the T-26

The T-26 first saw combat in the Spanish Civil War, where it showed its superiority over the current tanks of the period fielded by Italy and Germany. Then it saw combat against the Japanese in the Soviet-Japanese border conflicts at Lake Khasan and Khalkhin Gol, which exposed some of the design defects such as poor armour welding and the disadvantages of riveted constructions (the rivet would break off and could harm the crew inside). After that, the T-26 saw service in the Invasion of Poland and the Winter War against Finland. The Winter War effectively showed the Soviets that the T-26 was obsolete, as the 37 mm guns and anti-tank rifles and Finnish have could penetrate the light armour of the T-26. When World War II for the Soviet Union finally broke out in Operation Barbarossa, the T-26 proved inferior to the German's Panzer IIIs and Panzer IVs, plus the air supremacy of the Luftwaffe ensured many tanks were lost in the opening stages of Barbarossa.