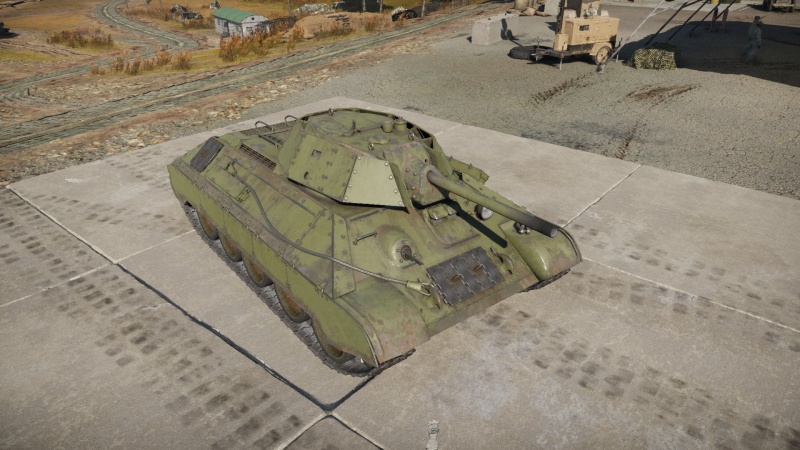 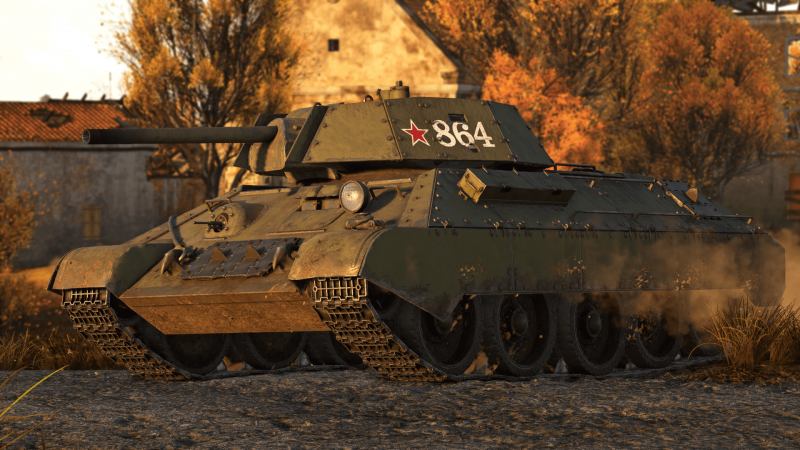 The feature of this tank is its 16 mm of spaced armour around its turret and sides, which in some occasions will bounce incoming shells when angled correctly. The T-34E is a truly unique tank for the collector, and also very useful often outperforming other T-34s. The extra spaced armour can be truly life-saving in certain situations.

The T-34E suffers from its weak turret like other early T-34s do. Even with the spaced armour, the T-34E still cannot stop most other enemy shells. So during engagements, try not to expose your turret by hiding behind an object. Also, when the T-34E is not angled, the upper frontal plate is very weak since there is no spaced armour there. So to minimize the chance to expose the weak spots, you should angle the tank 45 degrees to bounce incoming shells.

When getting hit by an enemy, some shells can penetrate the tank, and depending on the type of shells and the type of gun, the result may be very different. Against cannons larger than 75 mm, the T-34E's interior will be decimated. However, you will have a good chance to survive shells that are smaller with AP (Armour-Piercing) related shells. When suffering damage, most times your gunner and loader will be knocked out, or sometimes the cannon breech will be damaged. Therefore you should train your crew with high repair and agility skills.

The T-34E has a decent top speed of 42 km/h, it is slightly slower than its other twins T-34 (1940) and (1941) because of the extra weight of the spaced armour. With this speed, you will be able to reach certain positions before other medium tank counterparts. To use this speed to the fullest, players are suggested to flank around the map and get side shots of enemies. The reverse speed of the T-34E is mediocre, which means that players should not attempt to overextend when attacking, or this often results in destruction.

The gun on T-34E is the same on T-34 (1941) and (1942), the F-34 cannon is a decent gun at this battle rating and offers a large number of different shells. All of the shells are useful in their own ways, but most players prefer using BR-350B, this is because of its performance in combat. BR-350B is classified as an APHEBC shell, which means that once the shell enters a tank, in most situations, it will explode and destroy the enemy at once. The reloading speed is average compared to other tanks in this tier, so you should avoid blind shooting just in case. 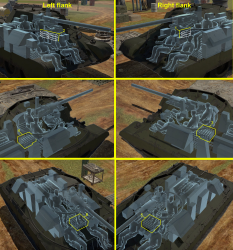 In ground RB, T-34E can be used in many styles, it can either be a flanker or it can be a front line attacker, it can even be a sniper at times. But no matter what style you play, always angle the armour to avoid being penetrated and remember that you always have the choice to cover the tank with decorations to further confuse the enemy.

To increase the survivability of the tanks, the T-34 design in the STZ factory was up-armoured by use of applique armour plates. These applique armour variants of the T-34 were called T-34E, with "E" meaning "ekranami" translates to "with screens" in Russian. These tanks were given applique armour throughout the entire vehicle, on all sides of the turret, one the front, on the sides, and even side skirts on the tracks. Some of the applique armour was placed in a way to act as spaced armour against enemy fire, which proved quite effective against the Panzer III's 50 mm KwK 39 cannon where the armour applied were on areas once vulnerable on the T-34 to the cannon. However, it was found that this additional armour did not help the T-34 against larger calibres such as the 75 mm PaK 40 and the 88 mm FlaK cannons. Due to the gradually growing number of tanks with the 75 mm and 88 mm, such as the up-gunned Panzer IV and the Tiger I that could easily destroy the T-34 even with the armour application, the armour configuration was not placed into mass production and thus only the testing batch of 47 units were made from the design. However, one armour applique model produced in STZ did see more widespread use in the production line, though it still had the name T-34E as its main nomenclature (also called the T-34E STZ in-game). This up-armoured model was more successful than the previous due to not drastically changing the design and only focusing on front armour protection by welding 15 mm of armour onto the front hull, thus minimizing weight gain by only focusing on the area most expected to be hit. The tank also featured redesigned road wheels and track designs. These T-34Es saw more widespread use and have photographs showing it being used in the Leningrad Front.