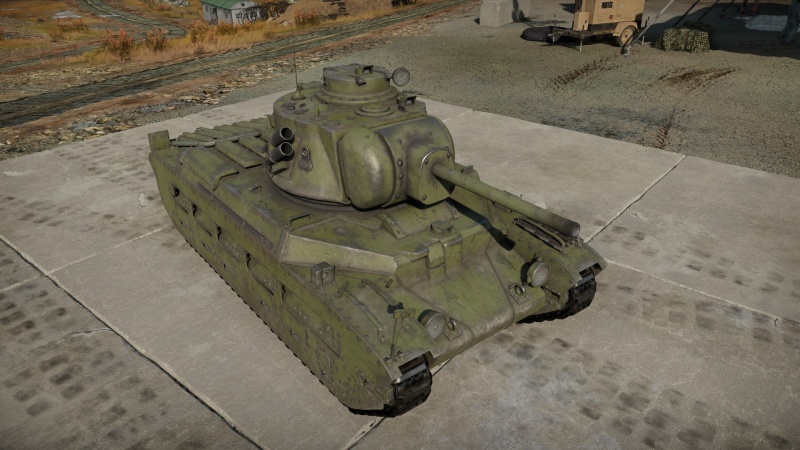 The ▂Tank MK-II "Matilda" (F-96) is a premium gift rank II Soviet heavy tank with a battle rating of 3.7 (AB) and 3.3 (RB/SB). It was introduced during Update 1.67 "Assault" as a reward for the 2017 World War Two: Chronicle events, unlocked after obtaining 6 Chronicle Awards. This is a British Matilda supplied to the Soviets through the Lend-Lease program whose turret was modified to receive a 76mm cannon.

The acceleration is good: the maximum speed is reached in seconds. The braking is good as well, as the tank is heavy and the maximum speed poor. The reverse speed is too poor to retreat quickly from an unexpected situation or allow any type of overextend tactic.

While the tank weighs only 28.5 tons for heavy tank (that's the average weight of a T-34 at the same BR), its narrow tracks make driving on soft terrain difficult (sand, snow, mud). Turning when moving is good and turning 180° on flat terrain only takes a few seconds. But turning from idling is very slow as there is no neutral steering. This also causes noticeable gun wobbling. Finally, going uphill is always difficult as the MK-II "Matilda" (USSR) loses speed very quickly.

The gun accuracy starts dropping at 800 m and becomes a handicap over 1000 m. The muzzle velocity is good and offers rather flat trajectories. While the turret rotation speed is good, the poor depression clearly is a handicap: the gun is situated very high due to the profile of the Matilda. This can make targeting an enemy close to you very difficult, especially if there is a little slope putting the enemy tank slightly under your level. The recoil is minimal and does not impact targeting quality. The reload time is a little longer than most of your opponents but the same as any T-34 tank at the same BR. The penetration values are good, like the T-34s. 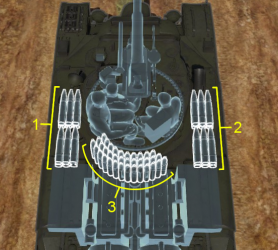 The small calibre of the MG will only allow you to use it as a spotting gun or to mow down minor obstacles blocking your line of sight.

The MK-II "Matilda" (USSR) should be played as a support tank like the KV-1 (L-11), taking advantage of its good armour and good penetration power. When playing as a support tank, you will help friendly tanks successfully defeat enemy tanks in their frontline engagements. Stay in proximity of the frontline to rely on penetration power, all while staying at a reasonable distance from it to maximize your armour and avoid being flanked or swarmed. Once the enemy push destroyed, you move forward together with frontline tanks and help capturing objectives.

When engaging enemy tanks, position your lower glacis behind cover to protect it from incoming fire. Unexperienced players will most likely waste shots on your frontal armour. With the BR-350B (MD-8 fuze) shell, the MK-II "Matilda" (USSR) easily can take on most opponents at this BR.

In the event the spearhead tanks of your team get crushed by the enemy, you will then play a defensive role by containing enemy breakthrough attempts. It will fall upon you to stop enemy tanks dead in their tracks. Being at a distance from the frontline will force enemy tanks to drive in the open to get to you. Always play with a nearby obstacle you can use as cover if you get hit and need to repair. Have a planned escape plan as the enemy will try to use artillery or CAS to dislodge you from cover. A good player in a MK-II "Matilda" (USSR) can lock a side of the battlefield, especially in corridor maps.

If you try to use the MK-II "Matilda" (USSR) in a different role on the battlefield, you will quickly reach its limits:

Your worst enemies will be the ones equipped with long cannons, able to penetrate you easily from middle to long range.

Main article: History of the Matilda

Matilda tanks were supplied to the Soviet Union as part of the Lend-Lease program. The Red Army received a third of the Matildas produced overall. Matilda heavy tanks were appreciated by the Soviet tank crews for their strong armour. A notable weak point of the tank however was its poor performance in snowy or icy conditions because of its narrow tracks.

While the Red Army used the standard 2-pounder gun installed on Matildas from the beginning, the evolution of German armour made this gun less and less effective. In December 1941, plans were made to equip Matildas with the 76 mm of the KV-1. Only 1 prototype was built. Installing a 76 mm gun in an already cramped turret without modifying it brought major shortcomings: the quasi-absence of gun depression and the even more limited space for loaders to operate around the gun. This led the Red Army to scrap the project and concentrate on new KV-1 models instead.