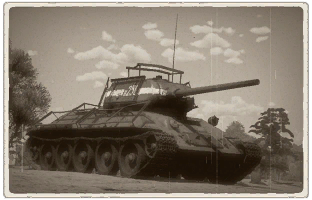 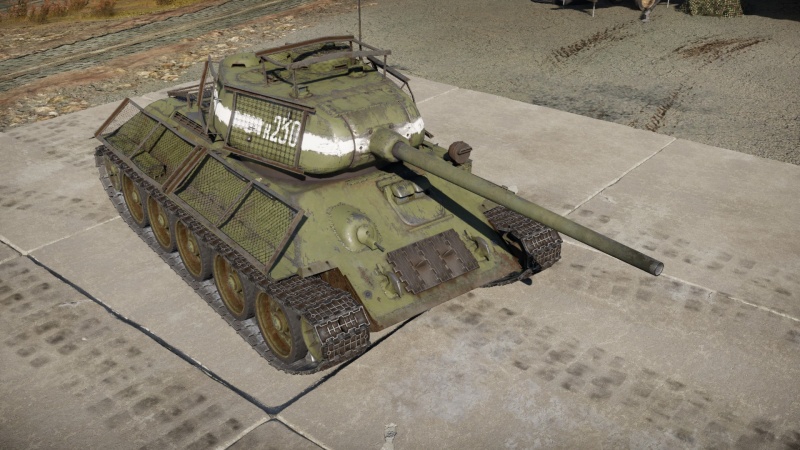 The T-34-85E is a premium gift rank IV Soviet medium tank with a battle rating of 5.7 (AB/RB/SB). It was introduced as a premium pack in Update 1.49 "Weapons of Victory". It was discontinued after the 2018 Victory Day sales.

The T-34-85E is essentially a gift version of the T-34-85, it has nearly the same characteristics and the only difference would be the mesh screens added onto the turret and hull. It is an improvement over the original's predecessor, the T-34-85 (D-5T) with a better armament, ammo, and an additional crew member. Aside from that, both tanks' technical specifications are pretty much the same.

The front hull armour is only 45 mm thick, even when sloped this is a pitiful amount of armour to fight with against the other vehicles at its BR as every other tank gun can penetrate that armour. Thus if possible, do not prolong the exposure of the hull armour towards the enemy.

As the T-34-85E is statistically the same as the T-34-85, many of the latter's strategy work well in the former. The T-34-85E's best playstyle is that of a flanker. Due to its high mobility, fast turret traverse, and a capable cannon with excellent post-penetration damage, the T-34-85E fills this role perfectly. Since the turret is so tall, it makes combat behind low obstacles difficult, as the turret segment above the main gun is visible. The T-34-85E's other playstyle can be as a support tank, by keeping up with more protected vehicles like the IS-2 and supplement firepower while their heavy armament reloads.

The T-34-85E would not make a very suitable short-range brawler though even with the 85 mm gun as the gun has a rather tedious reload for the specific playstyle and the T-34's armour is very poor at its BR. With that, the T-34-85E would tend to be able to fire one shot at a close enemy before it gets taken out by other enemies nearby. However, it is understandable that the situation is unavoidable, so it is recommended to stay steady by firing one shot at an unsuspecting enemy at close range before retreating to reload, evading enemy shots.

Any enemy vehicle around the T-34-85E's BR can destroy it if it can get a solid shot on the hull armour. Beware when exposing hull when coming out to take a shot on an enemy, someone is bound to be watching for the T-34-85 and they won't be afraid to plant a shell into the 45 mm hull armour. 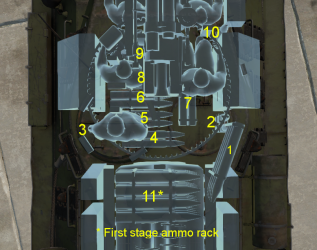 The T-34-85E can do well in many environments with its battle role, though it is recommended to stay away from large open areas as bigger guns like the Tiger's 88 mm can chew up the T-34-85E from a long-range. Thus, it is best to stay in cover, like fighting in the forests and urban areas. Using its mobility, attempt to flank enemy tanks to hit them before they realize where the T-34-85E is. Even if caught in a frontal engagement, the 85 mm gun can dish out enough penetration to get through weak points on most enemy tanks like the Tiger I's front hull plate and the Panther's gun mantlet. In these engagement, keep little hope in hull armour and hull angling, shoot first and evade, otherwise enemy tanks will be able to destroy the T-34-85E easily.

Any enemy vehicle around the T-34-85E's BR bracket can destroy it if it can get a solid shot on the hull armour. Beware when exposing hull when coming out to take a shot on an enemy, someone is bound to be watching for the T-34-85E and they won't be afraid to plant a shell into the 45 mm hull armour.

Panther A, Panther D, Tiger II (P) - The Panthers are one of the most common tanks around BR 5.7, and they pose a great threat with their deadly long 75 mm cannon, thick frontal armour and adequate speed. You want to avoid engaging them at long range as the T-34 has only x3.5 scope magnification, making long range shooting super hard. Engage the Panthers within 500 m and avoid shooting their frontal hull. Their biggest weak spot is the gun mantlet, which is only 100 mm thick and has a flat part in the middle. That is where you want to aim at, the T-34's APHE has sufficient damage to instantly destroy the Panther even from its turret. The second weak spot is of course the sides, guaranteeing an instant kill. Generally APHE is enough to deal with the Panthers, and no APCR is needed. For the Tiger II P, aim at the vertical area of the frontal turret which is also 100 mm. The best tactic is still to flank it however.

Tiger H1/Tiger E - The Tiger's weak spots are the opposite with the Panthers. Their hull are unsloped and rather thin, while the gun mantlet is weirdly shaped and can absorb quite some shells. The best engaging range remains the same, within 500 m. If the Tiger is angling, aim at the turret ring to disable the gunner and destroy the turret traverse, or aim at the hull side below the side skirt, which is only 60 mm. If it is not angling, aim between the driver's vision port and the MG for an instant kill. Avoid shooting at these two parts as they tend to bounce/absorb shells. For the Tiger E, don't shoot at the lower glacis as there will be add-on tracks installed there, making it harder to penetrate.

Ho-Ri Production - In a frontal engagement, APCR is required as the APHE shells don't have enough penetration. With APCR loaded, aim at the further sides of the fighting compartment, away from the gun, because the further from the gun, the thinner the armour gets, with the thinnest part being around 160 mm unsloped. Penetrating there will knock out its loader, gunner or commander, or detonate the ammo. Of course, the best way is still side-shooting with APHE.

Panzer IV/70(V), Jagdpanzer 38(t) - These small tank destroyers with their well angled frontal armour can be quite a problem from a distance. With APHE, you can disable their transmission by shooting at their lower glacis. Now if you can, flank them. The 85 mm APHE does a great job at penetrating sloped, thin armour, so you don't have to get to their absolute sides. For the Pz IV/70, you can also aim at the downward part of the gun mantlet since the shell might ricochet downwards into the hull, knocking out every crew member. The Jagdpanzer 38(t) doesn't have this problem, so side-shooting is required to destroy it effectively.

M4A3E2 Jumbo - This is another common enemy. It is recommended to use the BR-365A, the one with less penetration but more explosive filler. The reason is that it is better at penetrating sloped armour, which the Jumbo has. With that shell you can easily destroy a M4A3E2 who's not angling. If it is, aim at the hull side just above the tracks, or load APCR and shoot straight at its gun mantlet. Against a 75 mm M4A3E2 you can relax a bit as it will struggle to penetrate your armour, but your cupola is a rather large weak spot and a shot through there can knock out the T-34. Be more careful with the M4A3E2 76 W, as they can easily pierce through your armour.

In the final months of World War II, the T-34-85 was still very adequate as a medium tank, but the high casualties suffered by the fanatic defenders of Germany and their anti-tank weapons made the crew seek out a way to increase the tank's survivability against these infantry weapons. The crew improvised in the field modifications, and one of the method to shield the T-34s was to apply thin metal sheets or mesh screens onto the T-34 body in hopes that it would disrupt the warheads of Panzerfaust or Panzershreck before it detonates on the hull. These improvised T-34-85s were called T-34-85E with "E" for "ekranami" or "with screens".

The T-34-85 medium tank was equipped in field conditions with screens to protect it against high-explosive antitank projectiles during the assault on Berlin. During the Berlin strategic offensive the Red Army's tank divisions encountered a problem with increased human casualties and lost combat vehicles due to the enemy's use of portable anti-tank grenade launchers with high-explosive antitank grenades. The greatest difficulty involved conducting military operations in urban areas, where the enemy had the opportunity to use portable anti-tank guns from a large amount of cover at close range. One of the attempts to reduce the effectiveness of these munitions involved using mesh screens installed on the body of the tank a certain distance from the armour plating. These mesh screens were presumably built in tank-repair workshops. However, the screens did not provide effective defence.