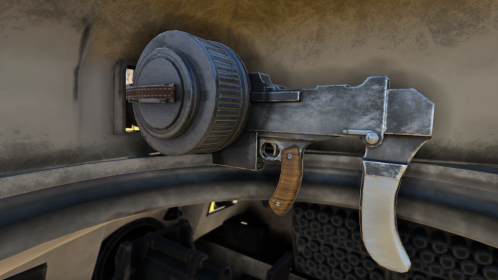 The MAC 31 inside of the SAu 40 commander turret

The MAC 31 is an interwar 7.5 mm French machine gun that is the secondary weapon for all domestic French tanks up to tier IV. It features a 150-round magazine and a relatively low rate of fire.

As the MAC 31 is only ever used as a secondary weapon, there is only a single, default belt available, made up of armour-piercing (AP) and tracer (T) bullets.

The MAC mle 1931 machine gun was a gas operated weapon chambered in 7.5 mm MAS. A distinct feature on the gun was the strange pistol grip and the side mounted 150 round drum. It could even be used as a SAW (squad automatic weapon) fitted with a 35 round box magazine and fitted to a tripod. It fires 450 rounds per minute which quickly overheats the barrel. It was even in French army protocol to dip the gun's barrel into a barrel of water to cool it down in case of emergency. It was used mainly as a tank MG and as a twin-mounted fortification weapon in the Maginot line. Its service started from World War 2 and ran all the way to the Chadian Civil War in 1965 where it fell out of use when the war ended in 1979.