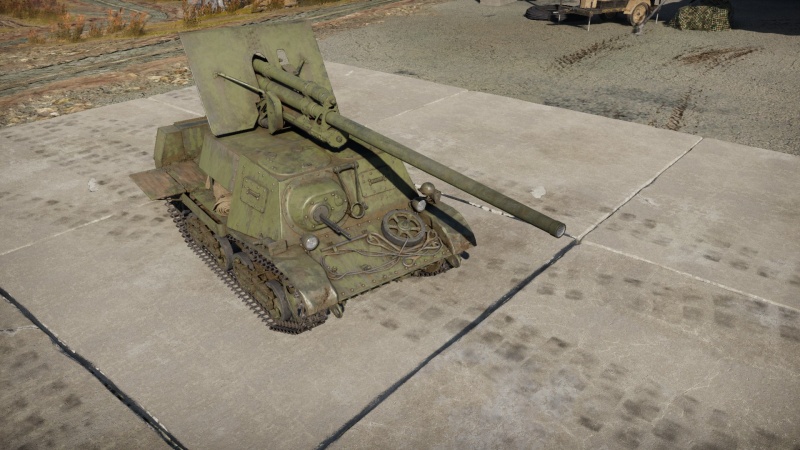 The ZiS-30 is a rank II Soviet tank destroyer with a battle rating of 2.3 (AB/RB/SB). It was introduced during the Closed Beta Test for Ground Forces before Update 1.41. It is a lightly armoured tank destroyer mounting a gun that is very powerful for its rank.

The highlight of this tank destroyer is its ridiculously powerful gun for its rank, which is capable of destroying most tanks of a similar rank in one shot. The ZiS-30 serves mainly in a support role, firing from the rear of the line at spotted targets. Despite this, the ZiS-30 can feasibly serve as a lone sniper or a hit-and-run vehicle, due to its powerful gun and impressive speed. Although the ZiS-30 is a powerhouse in terms of speed and firepower, it is quite fragile and can easily be taken out by enemy tanks. Due to the near nonexistent armour of the ZiS-30, the crew is extremely prone to damage and it takes very few shots to knock them out. A proven tactic is to fire at preoccupied enemies so that they cannot react fast enough to fire back. Often it helps to set up an ambush position on a ridge and wait for the enemy to enter your line of fire. After taking several shots (2-4), it is advised that a new position be found, as other enemies may have noticed you by that time.

The ZiS-30 possesses three main advantages – small dimensions, great speed and manoeuvrability, and a fantastic gun for its rank. With its good top speed and acceleration, it can move very quickly across the map. It is also comparatively a very small vehicle, so it can be a very hard target to hit especially at long range. Its gun has virtually no problems when penetrating anything on the given BR spread and features a (relatively) fast rate of fire and flat trajectory, making the vehicle a suitable long-range sniper. As the gun is mounted onto the roof, the vehicle has a reasonably tall profile. This is both an advantage and disadvantage – it compromises your cover which allows you to be spotted easier, but at the same time, you can shoot over lower obstacles while exposing only the gun shield.

Obviously, there are disadvantages as well. The gun's recoil is rather strong for the small chassis and the sway is large enough to cause you to lose track of your target, hence requiring realignment every time you take the shot. The vehicle also carries a very small ammunition supply. Most importantly, however, the vehicle's armour is practically nonexistent and even armour piercing rounds from rifle calibre machine guns can pierce your frontal armour at close range. The crew of the gun are protected only by the gun shield. Otherwise, it's exposed and thus very vulnerable. However, many armour piercing rounds will just pass through the gun shield without detonating, significantly reducing the damage. That being said, it is advised to use HE rounds when facing the ZiS-30.

Given its advantages and disadvantages, the ZiS-30's performs best when used as a highly mobile, long-range sniper. Race to a position using your speed and then conceal your fragile hull and then wait for the enemy to stumble in your sights. Use your high rate of fire to take several well-aimed shots, then quickly relocate.

The chassis is awful when stock: when the tank stops, it tilts forward, pulling the gun down into the ground. To counteract this, instead of braking use the "cruise control" feature set to CC1, that way you slow it down to 10 km/h without affecting the gun, achieving some stability. When the tank is spaded, the tilt is threefold reduced. Once spaded, doing a full stop when encountering other tanks is still ill-advised, but it will be far more bearable.

Start as usual: "Parts" and "FPE". The BR-271 is a good shell and the BR-271K upgrade can be ignored. Focus on all accuracy upgrades to give yourself a fighting chance at longer ranges. Additionally, it helps hit the weak spots on enemy vehicles. After this, research hp/ton upgrades like "Engine" to help with the wobbly gun issue, as paradoxically the better hp/ton rate makes the gun far more stable and allows it to return to the initial position faster on stop. The rest of the mobility upgrades will improve ZiS-30 behaviour over rough terrain. 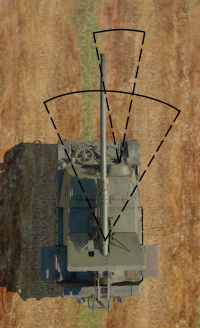 The 57 mm ZiS-2 gun offers among the highest penetration power at its BR. Its high muzzle velocity allows for a flat firing trajectory and thus makes it easier to aim from a distance and anticipate the path of moving targets. Its accuracy drop is noticeable only over 1,500 m distance.The ZiS-2 gun can sometimes penetrate the Tiger H1 side armour from long range.

Your recoil also is a handicapping feature: your hull being very light, it can not absorb much of the recoil power (even with the huge damping cylinders on the gun). Using the "sight distance control" feature can help mitigate that aspect but any movement of the mouse during the recoil phase will nullify the sight setting.

As mentioned above, the ZiS-30 is ideal for ambush and sniping attacks, especially due to the fairly flat trajectory of the rounds. Bring a full load of ammo (it carries only 20 rounds), especially the standard-issue APHE shell, which is capable of penetrating the armour of just about every reasonable enemy for your battle rating. Shoot'n'scoot tactics are advised and use the surprising agility of the vehicle to get into unexpected locations. When setting up an ambush in RB, you can turn off your engine to be even less detectable once you've found a spot where to wait for the enemy. Once the enemy drives into your crosshair, your short reload time will guarantee that you can fire a follow-up shot in case you missed the first shot or did not knock out the enemy in one hit and left you exposed to machine gun fire.

While this tank can be used in AB to some effect (due to its excellent gun and good handling), you lose your main advantage: surprise. The ZiS-30 is easy to conceal due to its small size, especially if you have camouflage vegetation to add to the vehicle. This means that it is particularly effective in RB and SB. At the start of the match, rush to a good location overlooking enemy movement routes or a capture point and snipe away, making sure that you change your position every few shots to prevent enemies from tracking you down. In RB, planes become a big threat as the game goes on. Even light machine guns are a threat, and planes at this BR start getting heavier cannons and various payloads, which will tear you apart, while the ZiS-30 barely has any anti-aircraft armament. Therefore, it is best to remain hidden in dense vegetation or among rocks or buildings to keep you safe. However, in the initial part of a game the player is usually safe, as the enemy is unlikely to have enough SP to spawn with an aircraft.

In SB the ZiS-30 is very good at protecting capture points from enemy vehicles. Simply find a good hiding spot and wait for your enemy to go to capture the point, then take them out one by one.

M4A3 (105): this low-rank Sherman is one tough tank to destroy, but luckily your ZiS-30 is one of the few vehicles that can destroy it with ease (most of the time). Within 500 m, your default shell can easily penetrate its frontal/side armour with an appropriate angle. You can also penetrate its frontal turret between the edge of the gun mantlet and the gun barrel. A penetrating shell is very likely to knock out most of its crew. However, when it's angling, hull down, or >500 m away, either aim really carefully at the turret or wait until it reveals other weak spots (sides). Note that you will be knocked out easily by its HEAT round so avoid getting hit by it. If the HEAT round detonates near your vehicle, it still has enough explosive filler to knock out your crew at very close range.

The vehicle featured a gun that was capable of destroying any German tank of the period at combat range. This was a very welcome trait and proved invaluable to the Soviet defences against the German Panzers. However, there were significant disadvantages to its makeshift design. The weight of the gun reduced the mobility of the vehicle and the size of the vehicle allowed only a very small ammunition supply of 20 rounds to be carried. Protection of the crew was nonexistent, as the vehicle had only a very thin amount of armour and the gun crew was protected only frontally by the gun shield. The vehicle was unstable due to its high profile, had a low operational range and the communication between the driver and the gun crew was very problematic. Only 101 ZiS-30's were manufactured due to problems with the availability of both the gun and the chassis, both being urgently needed elsewhere. The ZiS-30 served until Summer 1942, being replaced by more specialised vehicles such as the SU-76M once the urgency for such vehicles disappeared.

Soviet vehicles equipped with a 57 mm