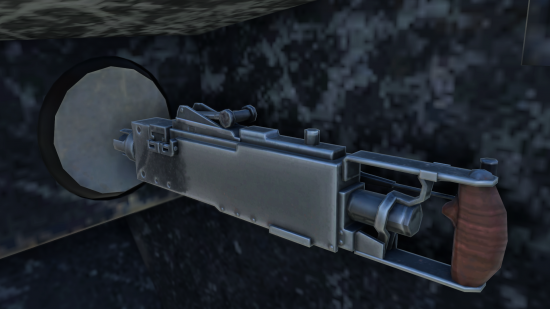 A water-cooled machine gun firing 6.5 mm caliber rounds, the Ksp m/14-29 leaves a lot to be desired as a machine gun in a vehicle-dominated battlefield.

The Ksp m/14-29 comes with only one belt preset composing of ball and tracer bullets in alternating fashion. The maximum penetration the belt provides is 5 mm at 10 meters from a 0 degree angle-of-attack.

Equipped onto the reserve Swedish tank, the Strv m/31, the Ksp m/14-29 is lacking even as is. The machine gun ammunition, being a little smaller than the usual at 6.5 mm, has only a maximum penetration value of 5 mm at point-blank range. This penetration value is not even enough to penetrate flat steel armour that some lightly-armored trucks posses.

The low rate of fire also makes fire saturation rather difficult, so some precise aiming is needed to make sure the machine gun rounds hit onto target.

From 1914 onwards, the Swedish have the Ksp m/14 Schwarzlose machine gun for use. However, the Schwarzlose machine gun was not suitable for aircraft mounts as it could not be synchronized to the plane propeller for firing. To fill the role, Browning M1919 machine guns were purchased in 1920s for aircraft use. Experience with the Browning machine guns showed promise to the Swedish military, which saw praise in the Browning's overall simple design and the prospect of being more cheaply procured than the Schwarzlose. This led to the adoption of the water-cooled Browning machine gun design, the M1917A1, in 1929. The gun itself was designated the m/29, though it was attached with the tripod design for the m/14,[1] and so the designation for the overall weapon was the Ksp m/14-29. Up to 274 units were produced by the Carl Gustafs Stads Gevärsfaktori between 1930 to 1936.[2]

In 1932, the new 8x63mm sk ptr cartridge m/32 round was adopted by the Swedish military.[2][3] Starting in 1936, the Ksp m/14-29 were upgraded to fire the new 8 mm cartridge. The machine guns firing the new round were redesignated as the Ksp m36 and these were placed on either the new Lavett soft mounts or the m/14 tripods.[2]