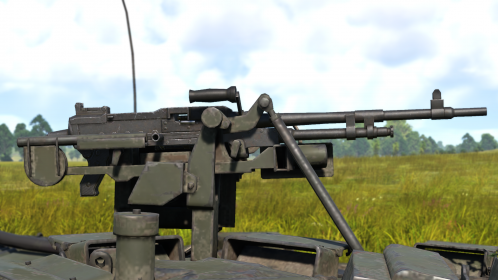 The 7.62 mm ksp 58 is a Swedish general purpose machine gun.

The Ksp 58 ("Kulspruta", literally "bullet sprayer") is a Swedish-licensed version of the Belgian FN MAG, a design that borrowed elements from both the German MG42 and American BAR to create what would become NATO's general purpose machine gun.

First adopted by Sweden in 1958, the Ksp 58, licensed by FFV-Carl Gustaf, was initially chambered in 6.5x55 Swedish. It was modified in the 1970s to be re-chambered in 7.62x51 mm NATO and a new gas regulator. The Ksp 58 would replace their aging Ksp m/42 (a lighter variant of the American Browning M1919A6) due to its lighter weight. The 1970s also saw the use of the Ksp 58 Strv (Stridsvagn "battle tank") variant which used developed for fixed mountings in the Strv 103 or S-tank family and stripped of features such as the bipod and buttstock. When the CV90 was developed, a new variant of the Ksp 58 that used a flexible mounting was designed for the Infantry Fighting Vehicle which became the Ksp 58 C.

By 2004, the Ksp 58 C had replaced the Ksp m/39s in Swedish service. The most recent variant of the Ksp 58 is the D variant. A service upgrade for the Ksp 58 B, the D comes with Picatinny rails, a fluted barrel, new flash hider and several modifications that reduce the weight of the entire assembly by 6.3 lbs (2.86 kg). Alongside Sweden, the Ksp 58 has seen service in Estonia, Latvia and Lithuania, which received these guns as part of German military aid in the 1990s.