The development of the new machine gun was assigned to the Degtyarov plant in Kovrov, which was worked on by a team of arms designer consisting of A. A. Namitulin, N. M. Obidin, Yu. M. Bogdanov and V. I. Zhirokhin.[2] In 1997, the weapon design was tested by the Russian Army and put into series production. This was later upgraded to a mass production scale in 27 March 2001 at the Degtyarov plant. The weapon was given a GRAU index number 6P50, the weapon was also known as the KORD (Konstruktsija ORuzheinikov-Degtyarovtsev – Design of Degtyarov plant team).[1] 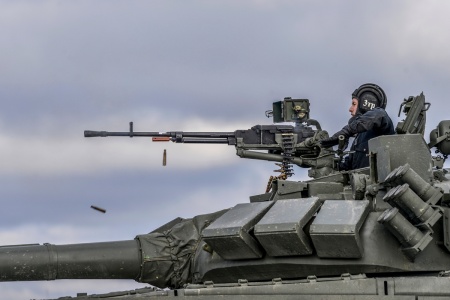 The KORD weapon is an automatic-only, gas-operated via long-stroke piston, belt-fed machine gun with a cyclic rate of between 650-750 rounds per minute. The KORD shares the same mounting interface as the NSV as well as uses the same 50-round non-disintegrating belt as the NSV. The designers implemented into the KORD a quick-change barrel for firing for extended period of time and a multi-baffle muzzle brake for recoil reduction, sufficiently so that the KORD could be fired from a shoulder stock attachment.[1] The weapon could be configured to feed the belt from either the left or right side. The KORD is also considered more accurate than the NSV, up to 1.5 times more so due to its mean deviation at a 100 m range being less than 300 mm.[2] The KORD comes with iron sights that can be adjusted up to 2,000 meter range, though a mounting slot on the receiver left side can accept optical or electro-optical sights.[2]

The KORD index number varies by the type of mounting installed on the weapon, with the 6P50 as the baseline

An export variant of the KORD is also available, chambered in the American .50 BMG caliber.[2] 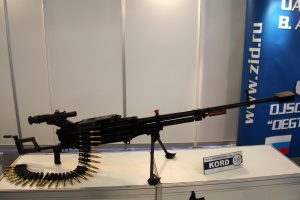 A 6P57 KORD with a 6T19 bipod installed for infantry use.

The KORD machine gun were used by Russian infantry and armored fighting vehicles, sometimes in place of the older NSV machine gun due to the same mounting design. Infantry can use the KORD with a 6T7 tripod and a 6U6 anti-aircraft mount. One configuration used by the infantry is with the 6T19 bipod to be carried and used in the frontline, an ability that benefits from the light recoil the design puts on the user.[1]

Some of the more recent conflicts the KORD was used in is the Syrian Civil War[9] and the War in the Donbas region of Ukraine.[10]