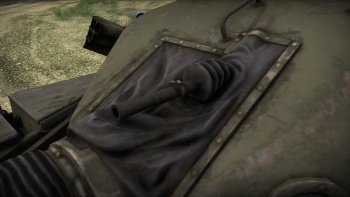 The L8A1 is a British 7.62mm General Purpose Machine Gun (GPMG), it is an Enfield L7 GPMG with modifications to make it suitable for use as a tank co-axial machine gun, in game it is found as the co-axial machine gun for the Chieftain series of tanks. The Enfield L7 GPMG of which the L8A1, L8A2, L37A1 and L37A2 are all variants is itself a British licence-built version of the Belgian FN MAG GPMG. As such the L8A1 performs identically to the FN MAG and L8A2 and almost identically to the L37A1 and L37A2. Being only a 7.62mm machine gun it is largely ineffective against all but the most weakly armoured, or open cabin, vehicles.

The L8A1 is used as the co-axial machine gun on the Chieftain series of tanks, these are the:

It is also used on the British Scout AH.Mk.1 helicopter.

The L8A1 performs identically to the L8A2 and FN MAG machine guns, while the only difference between it and the L37A1 and L37A2 is a marginally higher rate of fire on the L37 versions.

The L8A1 can only be equipped with one ammo belt consisting of two Armour-Piercing (AP) bullets, followed by one Tracer (T) bullet. Neither bullet has much penetration (maximum of 10 mm), however the AP bullet performs much better than the tracer bullet.

The L8A1 performs identically to the L8A2 and FN MAG machine guns, while having a slightly lower rate of fire than the L37A1 and L37A2. It has the same ballistic performance as the L3A1 found on previous British vehicles, but has a higher rate of fire.

Due to the very low penetration this weapon is largely ineffective against enemy armour (although you may be able to penetrate some vehicles with extremely thin armour). The gun is primarily useful for killing exposed crew members in open-topped vehicles (although there are few such vehicles at the battle ratings this gun is found at). The gun can also be used for marking enemy vehicles and obscuring the view of enemy players (shooting at their gun sight). You can use the gun against aircraft however it does minimal damage, and being co-axially mounted means it can often not be brought / kept on target against aircraft.

Along with the L8A2, L37A1 and L37A2 the L8A1 is a British License built variant of the Belgian FN MAG GPMG. The FN MAG is a Belgian 7.62 mm general-purpose machine gun, it was designed in the early 1950s by Ernest Vervier, while working at the weapons company Fabrique Nationale (FN). Between 1956 and 1957 the British armed forces trialled the FN MAG against the american M60, and selected the FN MAG. The MAG was built under license as the L7 GPMG by Enfield in Britain, with minor modifications being made. It entered service under the Designation L7A1 in 1963.

The L8A1 variant was designed for co-axial use, primarily in the Chieftain series of Main Battle Tank (MBT). It was modified with a fume extractor, removal of the shoulder stock, and a folding pistol grip, in order to allow the weapon to function better in the confined space available inside a tank.