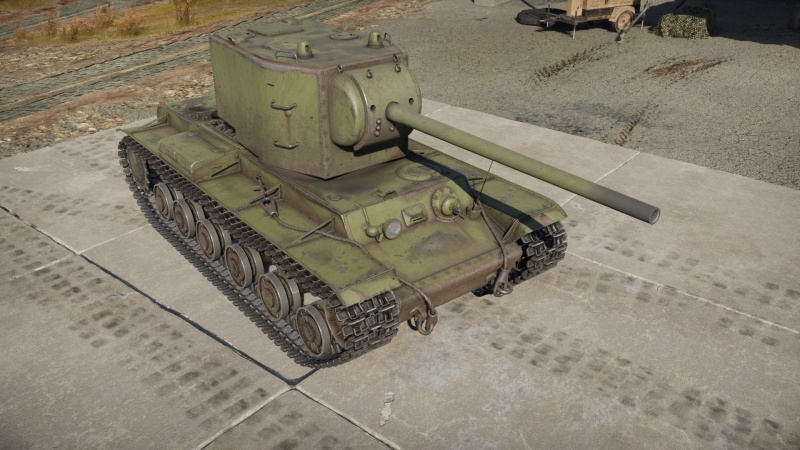 The KV-2 (ZiS-6) is a gift rank III Soviet heavy tank with a battle rating of 5.0 (AB/RB/SB). It was introduced in Update 1.59 "Flaming Arrows" as a premium pack but was removed from the store at the end of the 2018 6th Anniversary sale. It was available from the store for a short time during the 2019 "Black Friday". It was also made available for purchase in-game with Golden Eagles (

This tank is a spiritual successor of the original KV-2 in combat operations. Despite its high crew count of 6, the rate of fire is relatively slow; it is however faster than the howitzer-equipped KV-2s, with a higher velocity and flatter trajectory. It does share the same unfortunately slow turret traverse, reverse, acceleration, and heavy weight.

The KV-2 (ZiS-6)'s closest and most popular competitor of the same battle-rating is the KV-85. The KV-85 when compared, is free to unlock with currency spending, is lighter in weight, more manoeuvrable, faster in fire rate and turret traverse at the expense of fewer crew members. What the ZiS-6 lacks in these qualities may be compensated by its firepower comparable to a "mini-IS-2" as well as the added Premium talisman RP and SL increase bonus of which the KV-85 will lack on the get-go. These detail and information should be considered by the interested user when deciding whether to purchase this tank and incorporating it into their existing arsenal, or when taking into battle. The KV-2 (ZiS-6) will reward those who are patient, and is a boon to those seeking increased premium firepower unmatched by any other USSR vehicle at its rank.

Despite its significantly powerful armament, the KV-2 (ZiS-6) is plagued by many of the same weaknesses as all of the the KV lineage. At its battle rating, the tank's armour will be of little protection against other hostile vehicles it will face. With just 75 mm armour all around and including the largely flat and exposed turret, almost all tanks the ZiS-6 will face - a significant number of which have double the penetration value of the thickness of the KV's armour - will penetrate with little to no difficulty. This will more than likely cripple the crew to the point the rate of fire is reduced to virtually a standstill. Besides, tightly packed ammunition both within and at the base of the turret will turn the entire vehicle into an erupting volcano upon ammo rack detonation.

As a KV-2 heavy tank, the KV-2 (ZiS-6) has a slow top speed and HP ratio. However, the acceleration on the KV-2 (ZiS-6) is pretty good: the top speed is reached within seconds on flat terrain, even off-road. Its slow speed won't let you reach the frontline quickly but its good cannon combined with its tall profile and average armour rather call for a playstyle at a good distance from the enemy. The reverse speed is average: it won't let you retreat quickly but isn't a handicap either. The lack of neutral steering makes turning on the spot slow (2 km/h): make sure to build a little speed before turning to increase it (4 km/h). The tracks are quite large and grant you a decent mobility on hard (solid ground, roads) and soft terrain (mud, snow, sand). The KV-2 (ZiS-6) reaches 16 km/h when fording, it struggles at a meagre 4 km/h when climbing uphill from idling and 12 km/h uphill with some speed built-up. Due to its weight, the tank's mobility is unhindered by obstacles. The KV-2 (ZiS-6) also brakes quickly and without skidding although it is a heavy tank.

The KV-2 (ZiS-6) is a heavy artillery tank. It is an experimental up-gunned variant of the KV-1 and KV-2 models. It was built with an emphasis of destroying fortifications, bunkers, and enemy armoured vehicles, and featured the new 107 mm ZiS-6 cannon. While this vehicle has the same armour as the KV-1 and KV-2, this vehicle is notable for having a more powerful cannon; although smaller in calibre to the other KV-2 variants, the ZiS-6 has much higher armour penetration values. This tank will obliterate all enemy vehicles upon penetration with the exception of some lightly-armoured vehicles on which the contact fuse may fail to detonate.

The 107 mm ZiS-6 cannon, like many Soviet high-calibre cannons, has a few great strengths and some glaring weaknesses. In terms of ballistics, a close comparison in penetration would be the 88 mm KwK36 cannon found on the Tiger I, but the ZiS-6 has considerably more HE filler. The gun is fairly accurate out to one kilometre, but does suffer an occasional flyer.

As with most large-bore Soviet cannons, the biggest weakness is the long reload - almost 22 seconds with an untrained crew, and not much faster than 17 seconds with an Aced crew. The turret that the ZiS-6 is housed in offers no advantageous features - it is still in essence the same slow-traversing KV-2 turret found on the 152 mm models found at a lower BR. This means that the armour leaves much to be desired at the BR, and that the limited vertical guidance (particularly depression) will leave the ZiS-6 compromised in hilly terrain.

Due to the turret's slow traverse, limited vertical guidance, and the gun's very long reload, the KV-2 ZiS-6 is best used from longer ranges where it can utilize hard cover.

The ammunition choice is limited but sufficient:

In the late 1930s, the Soviet Directorate of Artillery, a part of the Soviet Ministry of Defense, issued a directive to design and build larger field artillery. By late 1937, going into 1938, proposals included both 95 mm calibre and 107 mm calibre. In the early 1940s, the Soviets had incorrectly received reports of up-armoured German tanks, leading them to question if their current 45 mm and 76 mm cannons were sufficient to combat the new German tanks. In response, the Soviets eventually drew up plans for the KV-4, to be armed with a ZiS-6 107 mm cannon. The 107 mm cannon passed factory tests in early 1941, and by mid 1941, had been mounted into the turret of a KV-2 for further testing and analysis. It was through this testing that the KV-2 with ZiS-6 cannon came into existence, as we see it in War Thunder.

Several hundred 107 mm ZiS-6 guns were created in anticipation of being fitted to the KV-4 and KV-5 heavy tanks. When the KV-4 was dropped in favour of the KV-5 (also to be armed with ZiS-6), and the KV-5 subsequently dropped due to the siege of Leningrad, all of the ZiS-6 guns were destroyed and scrapped, since the heavy tanks they were intended to be mounted in would never materialize.