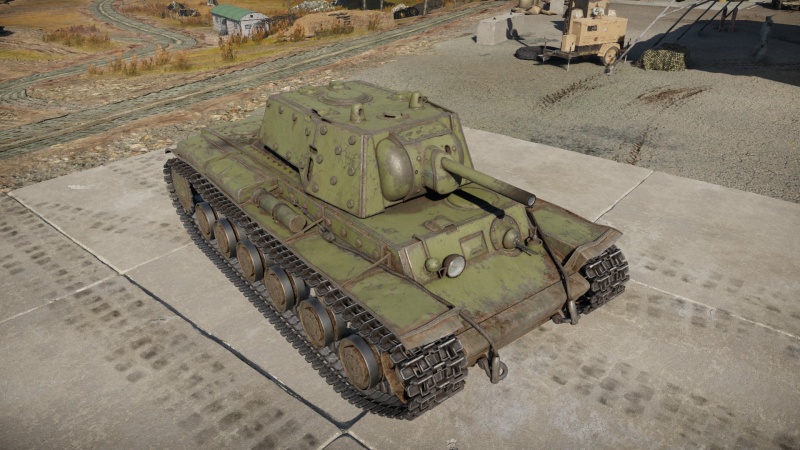 The KV-1E is a premium gift rank III Soviet heavy tank with a battle rating of 4.3 (AB/SB) and 4.0 (RB). It was introduced as a premiums pack in Update 1.41.27 and was removed after the 2018 Winter sale. The KV-1E has since been made available for purchase in-game for Golden Eagles (

Its basis is that of the original KV-1 model, but up-armoured with bolted appliqué armour on the front and side of the hull and turret. In the game, this tank possesses great armour and a mostly adequate gun. However, it will sometimes not be able to destroy an enemy from the front and will require very close distance or a flank shot. The defining characteristic of this tank is its armour and it can be a tough tank to destroy, most of the weak spots from its predecessors have been armoured and the only frontal weak spot is the centre of the upper hull. When using this tank do not be afraid to advance towards the enemy, especially against tanks such as the 75 mm M4s and T-34s since they will find it very difficult to penetrate your armour. This tank can also be used for long-range support since when the armour is properly angled almost no tank that it faces can pierce it.

The armour of this tank allows it to engage in the long-range fighting that defines an open country. However, the gun on this tank does not allow it to engage targets at range. This means that in while playing in open country, it is a good idea to get into a good overwatch position or to charge the enemy until the KV-1B is capable of engaging at the optimal range for the 76 mm weapon. While the armour on this tank is among the best for the enemies it faces, there are still certain tanks to worry about. The main tanks to work about are those with the American 76 mm, German 75 mm L/48, Soviet 57 mm and 85 mm, and of course all the large calibre guns such as the KV-2. These weapons are capable of piercing through the KV-1B armour at range, though this requires a lucky hit on an un-angled plate. Here are some tips when fighting in open country: