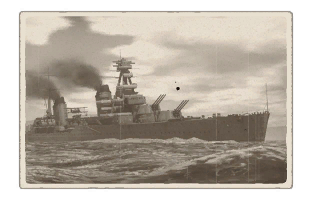 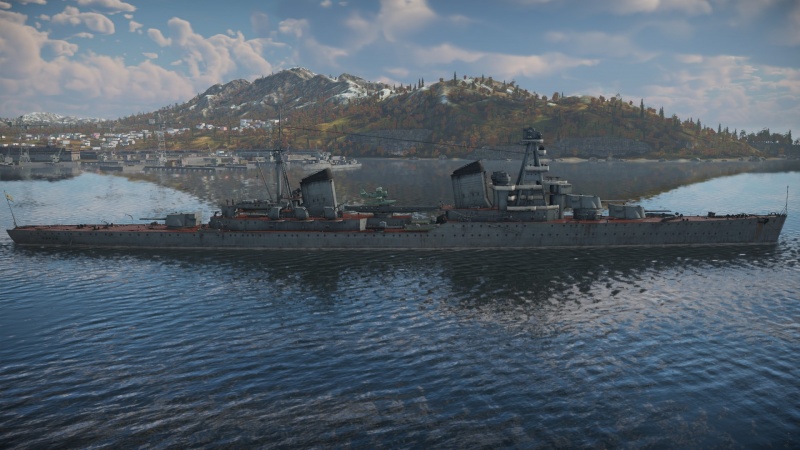 Still recovering from the Russian Civil War during the early 1930s. the Soviet Union is not capable of designing their own larger ship yet. The Soviet contacted the Italian company Ansaldo to help them design a new cruiser derived from the Italian light cruiser Raimondo Montecuccoli. The new ship came with some new domestic innovations, namely the heavily simplified citadel armour and placement of the internal modules that give the ship a considerably better module protection and weight saving as well as a powerful 180 mm naval cannons for long-range engagements.

The Kirov-class cruisers is unusual for various reasons. Due to her relatively low displacement for her size (9,436 tons with 191.3 m length) and lack of armour plating, she was usually classified as a light cruiser. Yet due to her large 180 mm guns and her huge size, she is also classified as a heavy cruiser by some sources.

The Kirov is a rather odd ship, while she only has 50 mm of citadel armour with no anti-fragmentation armour, the placement of her critical modules such as her engines, transmissions, and main ammo racks were all located inside her citadel and sitting below the waterline. This leaves most of her upper hull empty and can therefore take a good amount of damage from AP or SAP shells. However, due to the lack of armour elsewhere, the Kirov is very vulnerable against HE shells, as they can quickly deplete her relatively low crew size.

Being such a large ship with relatively low displacement, the Kirov's top speed is quite good. Although her excessive hull length will worsen her traverse speed.

Kirov has 9 x 180 mm/57 (7.1") B-1-P Pattern 1932 naval cannons for her main armament, arranged in triple turrets mounted A-Bs-X. This gives Kirov a heavy punch, but her overall firepower is lacking compared to other cruisers at her BR. With a fire rate of 5 rounds/minute, she has the slowest reload among the BR 5.7 cruisers (not counting Furutaka's 20.3 cm guns).

Kirov uses the OF-32 HE shell as default, with the ability to unlock the B-32 AP shell, the PB-32 SAPCBC shell as well as the ZS-32 HE-DF shell. A major advantage that Kirov has is the astounding 920 m/s muzzle velocity of all her shells, meaning that leading targets will not be as difficult. The SAPCBC shell sacrifices some of the armour penetrative abilities of the AP shell, but it is loaded with 7 kg of TNT explosive filler.

The Kirov has a secondary armament of 6 x 100 mm/56 (3.9") B-34 Pattern 1940 cannons arranged evenly on either side of the after smoke funnel. This is a rather light secondary battery, but they are versatile due to their clear angles of fire and ammunition selection.

These guns have access to the ZS-56 HE-DF shell as default and the ZS-56R HE-VT shell is able to be researched.

For anti-aircraft armament, Kirov has 7 x 45 mm/46 21-K cannons as well as 3 x DShK machine guns. The 45 mm cannons are not very effective against aircraft as they only have a standard HE shell with no special fuze, requiring a direct hit on an aircraft to deal damage. They serve better as anti-torpedo boat guns due to their rapid-fire ability and centralized arrangement. The DShK machine guns will be mostly for harassment purposes and to catch unaware planes.

Kirov is equipped with 2 x triple torpedo launchers firing the 53-39 torpedo. The base setting for these is a range of 4,000 m with a high speed of 51 knots. Using the torpedo mode upgrade, they can be adjusted to 10,000 m range at a reduced speed of 34 knots. Due to the location of the launchers being low and behind raised structure, the ship is not able to launch torpedoes towards the front, and must turn to release weapons.

Following the devastation of the Russian Civil War, the remaining industry available to the newly formed Soviet Union was everything but capable of designing large, new warships. Aware of this, the Soviet Union sought help from abroad, in order to be able to commit to the planned expansion of its navy.

In the end, help came from the Italian shipbuilders, which sold the blueprints for the Condottieri C light cruiser as well as the necessary machinery to the Soviets. Engineers further modified the design to suit Soviet needs, which included the fitting of new triple turrets, among other constructional changes. The project was approved in November 1934 as the Project 26.

Plans were made to construct a total of six Project 26 cruisers, which would be built in pairs and would receive various improvements over the respective previous pair. The Kirov, as the lead and prototype ship of the class, was laid down for construction in October 1935, after a minor delay.

The Kirov was launched in late 1936 and joined the Baltic Fleet in September 1938. After briefly taking part in the Winter War, Kirov quickly became trapped in the waters between Kronstadt and Leningrad by German minefields, following the invasion of the Soviet Union in 1941.

The warship would remain stationed in those waters for the better part of the war, providing gunfire support for the besieged defenders of Leningrad. Shortly after the end of WW2, Kirov was severely damaged by a German seamine. Following repairs, the ship was completely overhauled in the late 1940s and was later reclassified as a training ship in the early 1960s. In February 1974 however, Kirov was eventually sold for scrap, marking the end of its close to four decade long service.