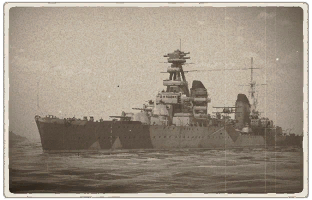 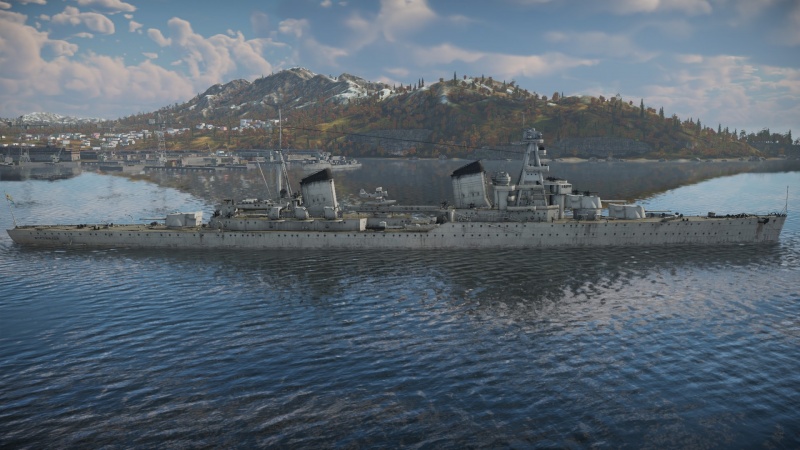 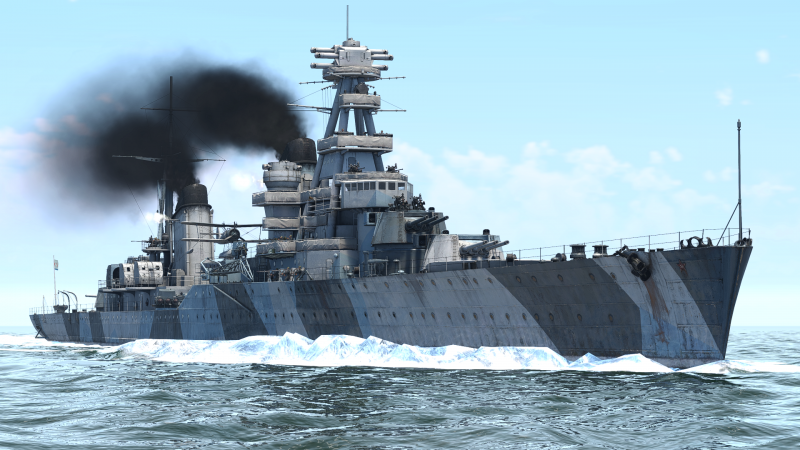 The Pr.26, Voroshilov, 1943 is a gift rank IV Soviet light cruiser with a battle rating of 5.7 (AB/RB/SB). It was introduced during Update "Ixwa Strike" as a reward for Battle Pass: Season III, "Strength athletics".

As with the other Kirov-class cruisers, the Voroshilov is best described as an oversized light cruiser. She dwarfes most of the other proper light cruisers and rivals the size of a heavy cruiser (just shorter than Mogami-class heavy cruisers by 13 m). The Voroshilov's size is essentially a double-edged sword: it can be easily targeted at any ranges, yet it's very survivable despite only having a simple 50 mm of citadel armour, this is because most of the Voroshilov's critical components (such as main battery ammo racks and engines) were located inside the citadel sitting just below the waterline. This essentially turned the whole upper hull into a huge bullet sponge that can contain a lot of damage, save for a well-struck shot. Other than the citadel armour, the Voroshilov's main turrets are also covered with 50 mm of armour to protect it from HE shells.

However, as mentioned above, the Voroshilov lacks any substantial anti-fragmentation armour to protect her crew from incoming fire. This is essentially her Achilles' heels as she can be overwhelmed by several enemy ships firing HE shells at her. She is also vulnerable to bombs and torpedoes due to lack of hull armour as well.

The Voroshilov can reach a respectable top speed of 78 km/h in AB (67 km/h in RB). However, she's quite sluggish to move around due to excessive hull length.

The Voroshilov has 9 x 180 mm/57 (7.1") B-1-P Pattern 1932 naval cannons for her main armament, arranged in triple turrets mounted A-Bs-X. While each shots is very powerful and accurate, the Voroshilov has a fairly low rate of fire at 5 shots per minute. This mean that she have lesser damage output per minute than its contemporaries at 5.7 BR.

The Voroshilov has an access to a powerful HE shell by default with 7.9 kg of TNT and good fragmentation penetration of 65 mm, which is enough to disable the turrets of most enemy ships at range and depleting the crews of some of less-protected ships. She can unlock an APCBC round with very high penetration but much lower explosive mass and a SAPCBC round with lesser penetration but with almost the same explosive mass as the HE shell (7 kg of TNT). Since every shells has the same muzzle velocity of 920 m/s, it is easy to leading targets and cycles between each shells.

As a rule of thumb, use HE shell against any soft targets and less-protected ships, SAPCBC against more well-protected cruisers, and APCBC against very heavy targets like dreadnoughts.

The Voroshilov has 6 x 100 mm/56 B-34 cannons as a secondary armaments, placed around the second funnel of the ship. These guns are quite weak against larger ship and mediocre against fast PT boats. However, they are quite effective as an anti-air weaponry thanks to high-velocity shell (900 m/s) and access to HE-TF and HE-VT shells.

The only problem with the 100 mm guns is that its ammo storage are located just below the firing platform. So, if they're hit, these ammo storage can be detonated and cause significant damage to the ship.

The key difference of the Voroshilov compared to her sister ships is her anti-air armament. She is equipped with 13 x 37 mm 70-K anti-air cannons placed all over the ship. These 37 mm guns are very powerful against any aircraft she will face and are capable of shooting down the enemy from up to 3-4 km away. As a bonus, she also have seven Vickers machine guns and four DShK machine guns to serve as a deterrent at close range.

The Voroshilov is a rather odd mix between faster light cruiser and slower heavy cruiser. She has the powerful guns and the hull size of a heavy cruiser, and the speed and (lack of) armour of a light cruiser. This made her very versatile and can be used to fulfill multiple roles.

The Voroshilov featured nine slow-firing yet powerful 180 mm guns as her main armament. These guns are quite effective at all ranges, but it is especially effective at medium-to-long ranges (~7 - 12 km) due to accuracy and high muzzle velocity. However, make sure to make every shot count, as the Voroshilov carries somewhat limited ammunition (900 shells) and most of the enemy cruisers reload faster than you and will retaliates as soon as they saw you.

Protection-wise, the Voroshilov is fairly survivable ship. While she lacks any substantial armour plates except 50 mm of RHA on her citadel and turrets, she can soak up a considerable amount of hits (especially AP rounds) and still remains afloat. However, due to her massive size and lack of armour (especially for a light cruiser), she is quite easy to hit if you did not exploit her A-Bs-X turret arrangements and her mobility, and she is quite prone to any kinds of explosive damages (HE shells, bombs, torpedoes, etc.)

While she is able to hold on her own for awhile, the Voroshilov is best used with any allied ships nearby. Stick together with your teammates, strike hard at long distance, and provide anti-air support is a key of success of playing this ship.

The light cruiser Voroshilov is one of the cruisers of the Project 26 (Kirov class), was laid down in 1935, launched in 1937, and in 1940 joined the Soviet Black Sea Fleet as flagship. Like other cruisers from the project, it was a deep modernization of the Italian cruiser Eugenio di Savoia, with significantly better firepower and hull strength. Voroshilov saw combat literally in the first days of the Nazi invasion of the USSR, assisting the attack on the oil silos of the Constanta, Romania in June 1941. Later that year she shelled the accumulations of German military vehicles and personnel in the Perekop region. During WWII, Voroshilov took an active part in combat throughout the Black Sea, and was several times damaged by shelling and enemy aircraft. For her courage, the cruiser was awarded the Order of the Red Banner. After the war, Voroshilov continued to serve in the Black Sea Fleet of the Soviet Navy, going through several stages of modernization. The cruiser was decommissioned in 1973 and later scrapped for metal.